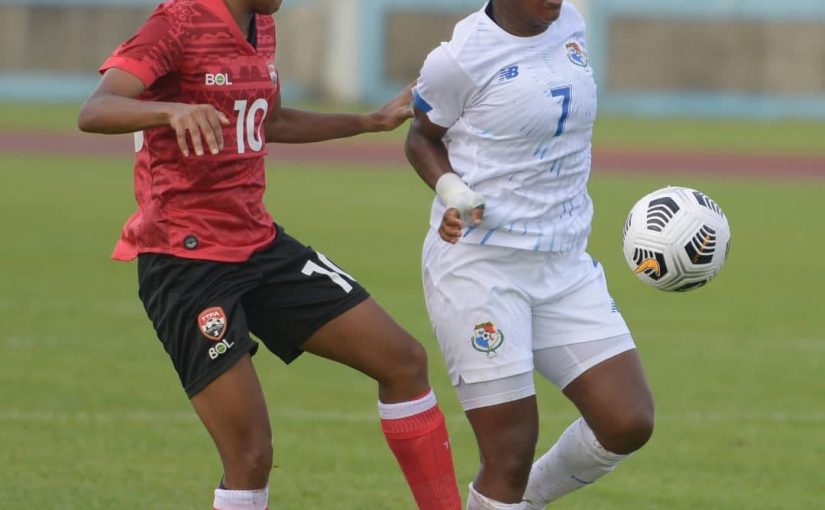 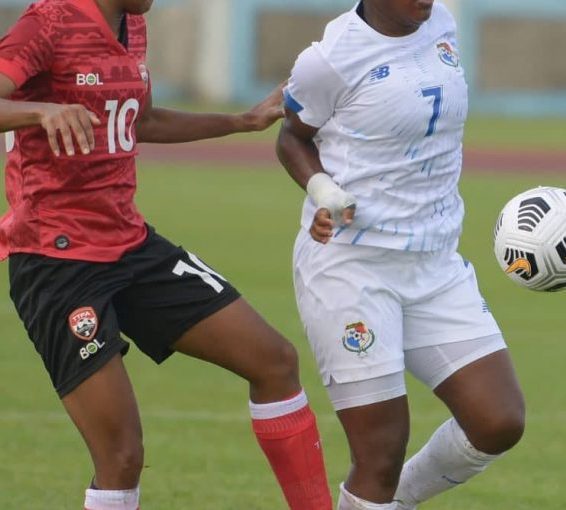 Women Warriors battle to a 1-1 draw vs Panama

TT’s Ochelle Decourcy (L) battles for the ball with Panama’s Deysire Salazar during the international friendly, at the Ato Boldon Stadium, Couva, on Monday. The match ended 1-1. – via TTFA Media

VETERAN striker Kennya “Ya Ya” Cordner scored in the seventh minute but defender Katherine Castillo equalised in the 87th as Trinidad and Tobago and Panama battled to a 1-1 on Monday, in the teams’ second women friendly football international, at the Ato Boldon Stadium, Couva.

Cordner, who plays for IL Sandviken in Norway, raced on to a through-ball from the middle, got the better of the advancing Panama goalkeeper Farissa Cordoba, and slotted her right-footed shot into the empty net.

But, in the dying stages of the match, Panama’s left-back Castillo rose to head a corner from Marta Cox to the left of TT goalie Kimika Forbes.

The teams played to a goalless draw in their first encounter on Thursday, also at Couva.

Cordner, who has been involved in the TT squad for over 15 years, showed she has lost little of her ability to find the back of the net, as she pounced on Cordoba’s hesitancy to put TT in front, early in the contest.

Panama had a chance to level the scores, when referee Cecile Hinds awarded a penalty when central defender Victoria Swift caught Carina Baltrip with a hard tackle in the 34th minute.

But Forbes, sister of TT’s captain Karyn, guessed correctly as she dived to her left to deny Cox’s spot-kick. Cox collected the rebound but skied her shot overbar.

The TT skipper had a wonderful opportunity to extend the lead, three minutes before the half-time whistle, with a freekick that crashed off the crossbar.

The coaches (TT’s Kenwyne Jones and Panama’s Ignacio Quintana) made a host of changes in the second half, due to injuries and tired legs, which resulted in a scrappy and stop-start affair, during the latter stages.

Striker Lineth Cedeno squandered a good chance to put Panama back on level terms in the 49th, with a left-footed shot that went overbar, following a well-placed diagonal ball from Cox.

Cedeno tested Karyn Forbes with a left-footed shot in the 65th minute while, 12 minutes later, Cordoba came up trumps to save efforts from Cordner and Dennecia Prince, in a rare TT counterattack.

Panama pushed players forward for the equaliser, and their persistence paid off when Castillo headed home, from inside the six-yard box.

In stoppage time, Hinds allowed play to continue after Laurell Theodore was caught in the centre of the field, but Prince failed to find the target, with only Cordoba to beat.

The respective coaches made changes to their starting line-ups from the first encounter on Thursday.

Both teams used the pair of matches as preparation for the 2022 Concacaf Women Qualifiers.