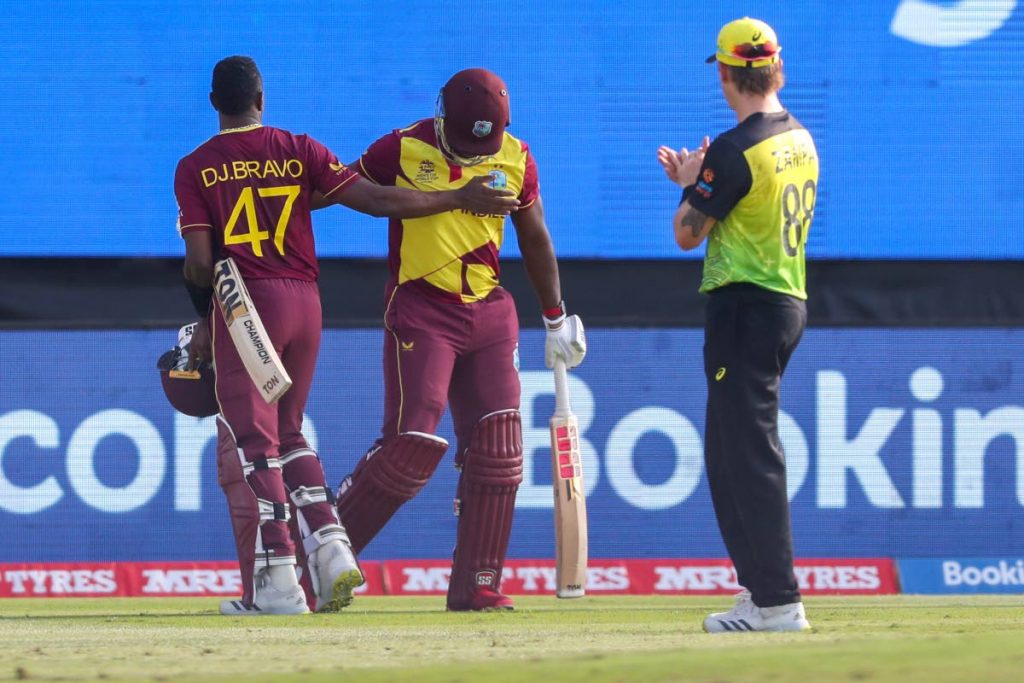 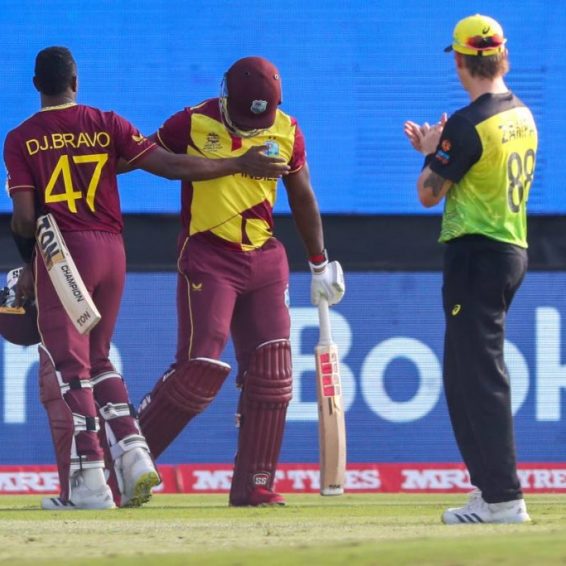 IT was not the way Dwayne Bravo, and possibly Chris Gayle would have liked to end their illustrious international careers as West Indies fell to an eight-wicket defeat to Australia in the International Cricket Council T20 World Cup in the United Arab Emirates, on Saturday.

Bravo and Gayle enjoyed themselves during the contest smiling from ear to ear.

Bravo announced on Thursday that Saturday’s match will be his last match in Windies colours. Gayle has not yet announced his retirement, but many felt it was his last match for West Indies.

When Gayle (15) and Bravo (ten) were dismissed both batsmen saluted the crowd and hugged their teammates as they left the field.

West Indies’ Dwayne Bravo, left, gestures to teammate Andre Russell as he walks of the field during the ICC Twenty20 World Cup match against Australia in Abu Dhabi, UAE, on Saturday. (AP Photo)

Legendary West Indies cricketer Brian Lara was among those looking at the match. When Bravo and Gayle made their debut for West Indies Lara was on the West Indies team and already considered one of the greatest batsmen to ever play the game.

West Indies scored 157/7 in 20 overs batting first with Kieron Pollard hitting 44 off 31 balls. Evin Lewis and Shimron Hetmyer chipped in with 29 and 27 respectively.

In response, David Warner struck 89 not out off 56 balls with nine fours and four sixes and Mitchell Marsh contributed 53 as Australia wrapped up a comfortable win. Australia closed on 161/2 in 16.2 overs.

Gayle bowled the 16th over and got the wicket of Marsh. As Marsh walked off the field Gayle celebrated by jumping on the Australian’s back.

West Indies will not advance to the semifinals after ending the tournament with four losses and one win.

After the match, the Australians paid respect to Bravo and Gayle with a guard of honour.

Warner even did the Champion dance with Bravo following the match. The dance became popular during the West Indies T20 World Cup title run in 2016.