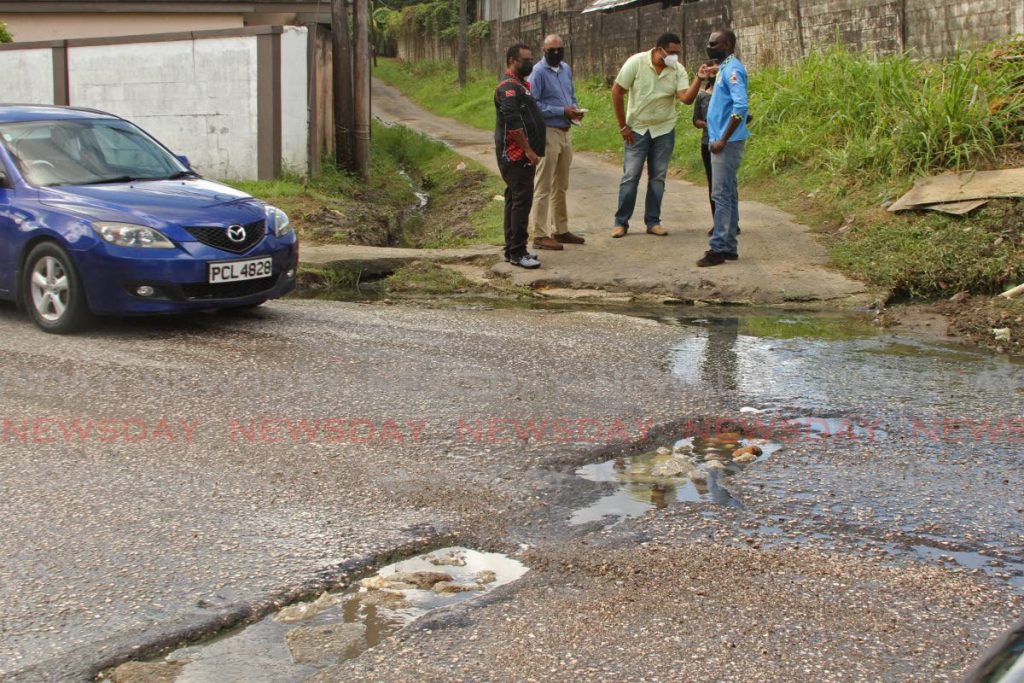 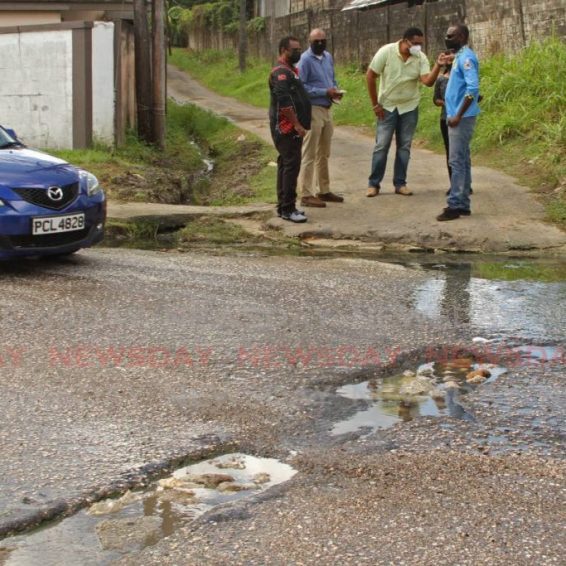 President of Macaulay Taxi Drivers Association Haimraj Narine, front, leads representatives from the Ministry of Works and Transport on a tour of roads in Claxton Bay and environs on Monday. – Marvin Hamilton

DIRECTOR of Highways Division, Anil Mohansingh has given the Macaulay Taxi Drivers Association the commitment to rehabilitate deplorable roads in the area, but cautioned it is not going to be an easy fix.

He said there were long-term issues, many relating to structural damage caused by the Water and Sewage Authority (WASA) which will take time to address.

Representatives from WASA are expected to tour the area with the taxi drivers from noon on Wednesday.

On the invitation of the association’s president Himraj Narine, Mohansingh and a team from the Highways Division visited the area and toured St Margaret’s, Claxton Bay, Macaulay and Soledad Road where he was able to see, first-hand, the state of roads and bridges.

Following the tour, Mohansingh told the Newsday he empathised with the taxi drivers who have been facing some challenges owing to the poor condition of the roadway in the community they operated in.

“The Highways Division team saw first-hand many of the issues which have been reported to our district offices.”

He said the district offices had been trying to address what they could within their remit.

Mohansingh pointed out that many of the long-term structural problems were WASA related.

“WASA would cut a trench across the road and not reinstate it. In some areas, where WASA lines are leaking, the leaks have been continuing over a lengthy period. From time to time WASA would come in and do some work, but the areas remain saturated.”

Narine admitted that 95 per cent of the bad roads in the areas stem from work done by WASA.

On Sunday night, green-band maxi taxi operators who work the same route, filled deep potholes across the St Margaret’s Junction, in a bid to alleviate traffic congestion on an off peak periods.

Mohansingh explained the damage to this particular area has to do with a commercial structure that would have covered a box drain over a major overflow relief gully. He said there is some blockage but the structure has made it impossible to get in to unclog it.

“There is some blockage so the water is spilling on to the roadway, just settling there and damaging it.

(UPDATED) NATCA one week before THA election: Too close to call

Members of Macaulay Taxi Drivers Association lead representatives from the Ministry of Works and Transport on a tour of roads in Claxton Bay and environs on Monday. – Marvin Hamilton

“We understand the frustration of the taxi drivers, but we give the commitment that we are here, working with them. The roads are our responsibility and we would do our best to address the problems.”

“The minister committed to start the work in two weeks, but that has not happened. Mr Mohansingh gave a commitment to at least do some patching before the end of the week.

“We are holding him to his promise, and if by Wednesday, Thursday we see nothing, we are going to block the road with a 40 feet container.”

Narine also appealed to Mohansingh for the restructuring of a bridge in Macaulay which is rapidly sinking due to wear and tear.

He said the integrity of the structure is daily weakening by heavy trucks transporting cement and gas, trucks which are not authorized to traverse this route.