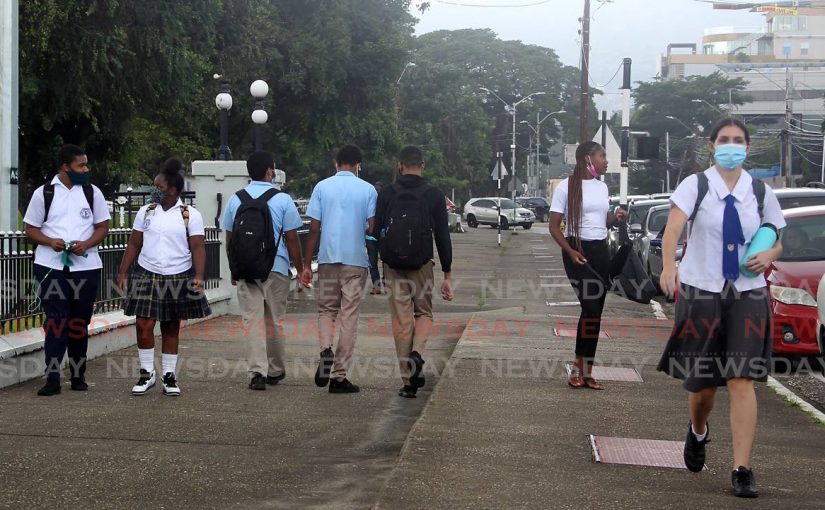 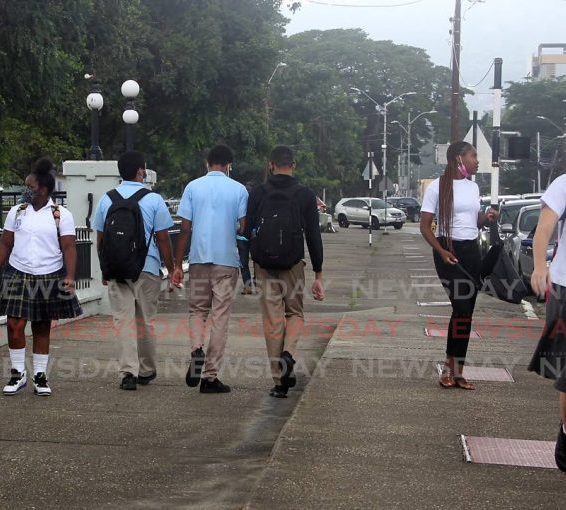 Students have said they are comfortable being with their classmates again, whether they are vaccinated or not.

Minister of Education Dr Nyan Gadsby-Dolly, last Wednesday, announced all students forms four-six, vaccinated or unvaccinated would return to the physical classroom from Monday and their teachers would no longer be required to teach virtual classes.

Students in forms one-three will continue their classes virtually and will return to physical classrooms in January if all goes well with their schoolmates in the upper forms.

A few students attending schools in the Port of Spain area, speaking to Newsday anonymously, said they were happy to be back out to school and much preferred the physical environment as opposed to the virtual classes they have been attending for nearly two years.

Newsday spoke to some Fatima College students during their lunch break on Monday. They were all wearing masks as they purchased food from a vendor just outside the school compound. One student said he was happy to be out and he felt fine being with his unvaccinated friends.

Three CIC students said they too were comfortable being around unvaccinated children.

“I don’t care, I am not afraid of covid19,” joked one young man with his friends. “I couldn’t do the online classes. I would just sit down and play games. Not only is it harder to get your attention, but it is also easier to lose it, so when you finally sit down to focus, any noise you hear around the house distracts you.”

Another student said, “In the end, anyone can contract the virus, so I don’t really have a problem with it. I think more so it was the parents who had an issue rather than the kids, but I don’t have a problem being around unvaccinated friends.

“It was harder to get my attention (in virtual classes) because I lose focus very easily so if I had to get something in the kitchen, I would get distracted and the class would keep rolling, but here, the teachers are able to keep your attention.”

He also said he was happy that his unvaccinated colleagues were able to return to class because he felt that they were falling behind in the virtual classes.

“I feel like some schools you need to be in classes. I’m glad my friends are getting the chance to come out even though they aren’t vaccinated.”

At Holy Name Convent, a student said, because it was the first day back, she would wait to see how it all unfolds, but for the most part, it was ok.

The unvaccinated student said her parents only sent her out to school because it was now mandatory, but they still had reservations.

They all said they were comfortable with the health protocols implemented by the school and were not concerned about mingling with each other.

Zena Ramatali of the National Parent Teacher Association (NPTA) said there were issues with bullying in some of the schools.

She said the association is now tasked with advising schools to educate their students on bullying.

“We now have to teach them so they don’t bully, or segregate. In some instances, it is the parents who are speaking these things to their children, and they are playing it out in the schools.”

She said the bullying is occurring with both vaccinated and unvaccinated children where they are disagreeing on each other’s perspectives of the covid19 vaccines.

She said parents are also engaging with each other on various online platforms.

“This is not what we want to inculcate in the children. We have always had the right in this country to political and religious freedoms.”