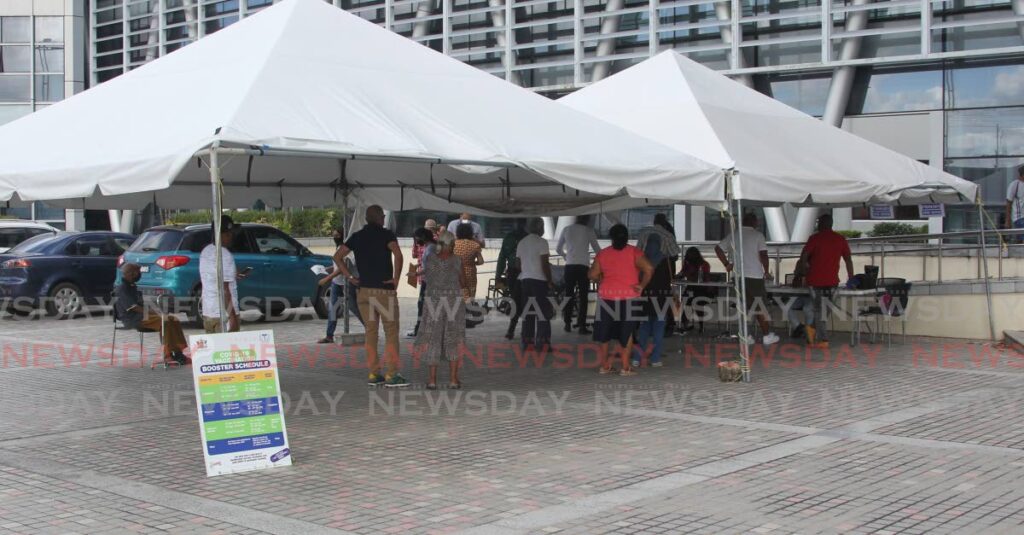 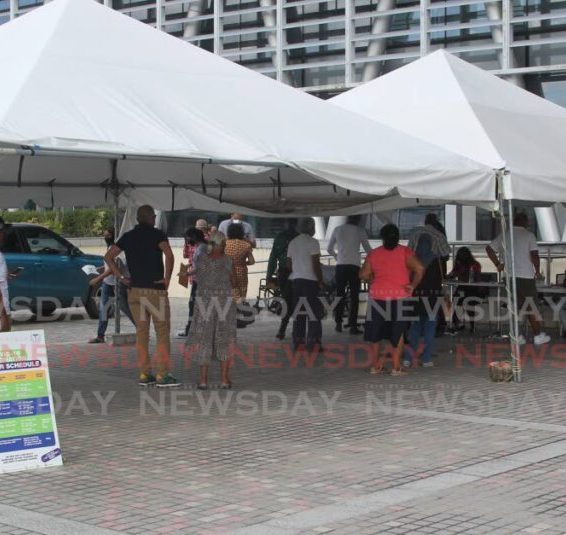 On Tuesday, after a three-day Christmas break, the mass covid19 vaccination drive resumed at the Southern Academy for the Performing Arts (SAPA) in San Fernando.

Scores of people turned up to get their jabs, saying it would minimise their chances of dying from the virus.

Deonarine Ramadhin of California and his children, Kathlyn, 12, and Kevin, 19, were at SAPA for their first dose of a vaccine.

“We now decided to take it,” he said as the family waited in front of the building to go inside.

He said the death of an unvaccinated mechanic speeded up their decision to take the jabs. The mechanic died a few days ago from the virus, Ramadhin said.

“He was asthmatic too. His body could not fight against the virus. It is sad, especially to happen at this time of the year,” Ramadhin said.

The line for booster shots at the SAPA mass vaccine site, San Fernando was shorter than previous day. Photo by Lincoln Holder

He said his daughter is preparing for the Secondary Entrance Assessment next year, and she is also preparing to attend physical classes.

The SAPA site was closed on Friday, to give vaccinators a break for the holiday.

Marabella resident Gisette Sanchez, who got her second dose in August, accompanied her two children, Hannah Narine, 18, and Nathaniel Narine, 16. On Tuesday, Hannah got her second jab, and her brother got his first.

“For me, it is a matter of getting the body to be able to fight the virus. I did background medical checks on both of them. Their platelets were strong enough, and they were cleared to take the vaccine, ” Sanchez said. “They are good to go.

“It was a smooth process here. Everything was in order, and there was no fuss.”

The South-West Regional Health Authority has said people who got their second dose of the vaccine between June 26 and 30 can get the booster on December 30 and January 3-7.

People who received their final dose between June 15 and 18 can get the booster from January 13-18.