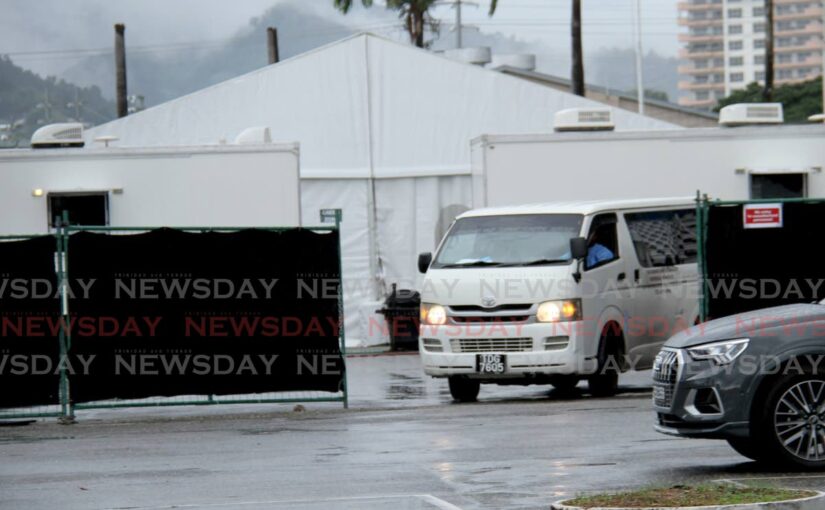 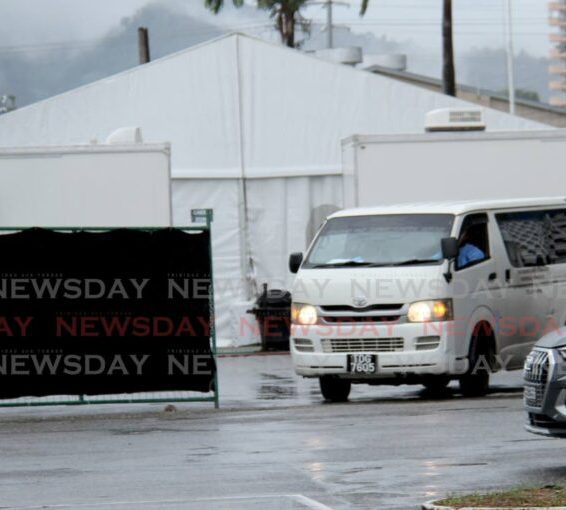 A hearse exits the field hospital at the Jean Pierre Complex, Port of Spain on Saturday, one of the sites where where critical covid19 patients are treated. – AYANNA KINSALE

While the omicron covid19 variant has not yet been detected in TT, professor of molecular genetics and virology at UWI’s Faculty of Medical Sciences, Christine Carrington says, as was the case with the delta variant, omicron will eventually reach TT’s shores.

The warning comes as the government introduced new travel restrictions on anyone coming out of eight countries in southern Africa in an attempt to slow down the entry and restrict the spread of omicron.

Carrington encouraged people to reduce the risk of getting covid19 by washing or sanitising their hands regularly, wearing their masks, improving ventilation of indoor spaces, avoiding crowded spaces, and to get vaccinated.

“Even if the variant is less sensitive to vaccine-induced immunity, it is likely to still provide enough protection to reduce severe disease.”

Speaking at Saturday’s Ministry of Health covid19 press conference, she said omicron possesses genetic changes that could make it more resistant to immunity from vaccines and previous infections.

Carrington explained that the variant has more mutations which could make it spread faster including 32 mutations on the spike protein and ten mutations on the receptor binding domain which gains entry to cells.

“Several of the mutations found in omicron are found in other variants of concern wherein those variants are associated with increased transmission and reduced vaccine sensitivity.

“However, the role that they play in omicron still has to be confirmed. There are studies underway to address this and we can expect to get more insights in the coming weeks.”

She said preliminary evidence showed the immune protection gained from infection with previous variants may not be as effective against omicron, and that it is more easily spread than other variants since the number of cases seems to be increasing in all provinces in South Africa.

Omicron’s detection coincided with a sharp rise in cases in South Africa so authorities believe it may be more transmissible than delta. It now accounts for about 90 per cent of cases in the Gauteng province of South Africa.

Scientists are also uncertain if omicron is associated with more severe disease.

Carrington said the diagnostic PCRs used for covid19 detects the variant but one of the three target genes the PCR operates on is not detected in omicron.

“This is referred to as S-gene drop out or S-gene target failure, which can be used as a marker for this variant and is a convenient way to tell if omicron may be present in a sample pending confirmation by whole genome sequencing.

“All of these things have to be further investigated. In particular, while the presence of other mutations may give you a hint about the virus’ sensitivity to vaccines, this is not yet proven and tests need to be done to confirm this.”

Prematurely called nu by some as nu is the next letter in the Greek alphabet after the variant of interest mu, omicron is the fifth variant of concern and the second one from South Africa. Since only about 24 per cent of South Africa’s population is fully vaccinated, it could account for the emergence of the new variant.

She said the earliest sample in which the omicron covid19 variant (B.1.1.529) was detected was taken from a patient in Botswana on November 9 so it has been in circulation for at least two weeks.

However, it was first reported to the WHO from South Africa on November 24, and has also been identified in Botswana, Belgium, Hong Kong and Israel in travellers from South Africa, Malawi and Egypt via Turkey.

Noting that there were 276 confirmed cases of the delta variant, Chief Medical Officer Dr Roshan Parasram stressed not every single sample of people with covid19 was sent for sequencing.

Instead, sequencing was limited and based on specific criteria including cases that seemed to be reinfections.

Carrington confirmed that UWI received samples from the Ministry of Health of people in state quarantine as well as those who were suspected to be experiencing a second infection.

“When people come into TT they have to show they are PCR negative. If they turn positive while in quarantine, we would get those samples and we would sequence them and we are able to detect the omicron variant.”

“Over the time the virus that is circulating is going to be changing so only when you see two different sequences at the two different time points would you know that this is clearly a reinfection.”

She stressed that with vaccination people were less likely to get sick, less likely to transmit, it reduced the risk of severe disease, hospitalisation and death, and with less of the virus in circulation, there would be less replication and less chance of variants emerging from the population.

As part of the new travel restrictions imposed by the government, vaccinated or unvaccinated, citizens and permanent residents who visited Botswana, Eswatini, Lesotho, Malawi, Mozambique, Namibia, South Africa or Zimbabwe within a 14-day period of their arrival in TT will have to undergo mandatory state-supervised quarantine of 14 days or more at their expense.

Non-nationals who visited any of these countries within 14 days of a planned arrival to TT will not be allowed to enter the country. All other existing entry requirements, such as a negative PCR test result taken 72 hours or less prior to arrival in TT, still apply.

Health Minister Terrence Deyalsingh stressed that the government will continue to monitor the global situation with omicron and the list will be adjusted as necessary.

TT has had interactions with South Africa over the years including the purchase of Johnson and Johnson covid19 vaccines manufactured in that country. TT also has a High Commission in Pretoria, South Africa’s capital, and a number of citizens work there.

TT is not the only country to apply travel restrictions and bans to travellers from the eight countries as there were more recent reports of two cases in the UK, two in Germany, one in Belgium and one in Italy.

For example, travellers will not be able to enter the UK unless they are UK or Irish nationals residents; non-nationals will be banned from entering the US; Japan announced travellers from southern Africa will have to quarantine for ten days and take four covid19 tests; and Australia suspended flights from the eight countries and the Seychelles for 14 days, and non-nationals who were in those countries 14 days before travelling to Australia were banned from entering the country.