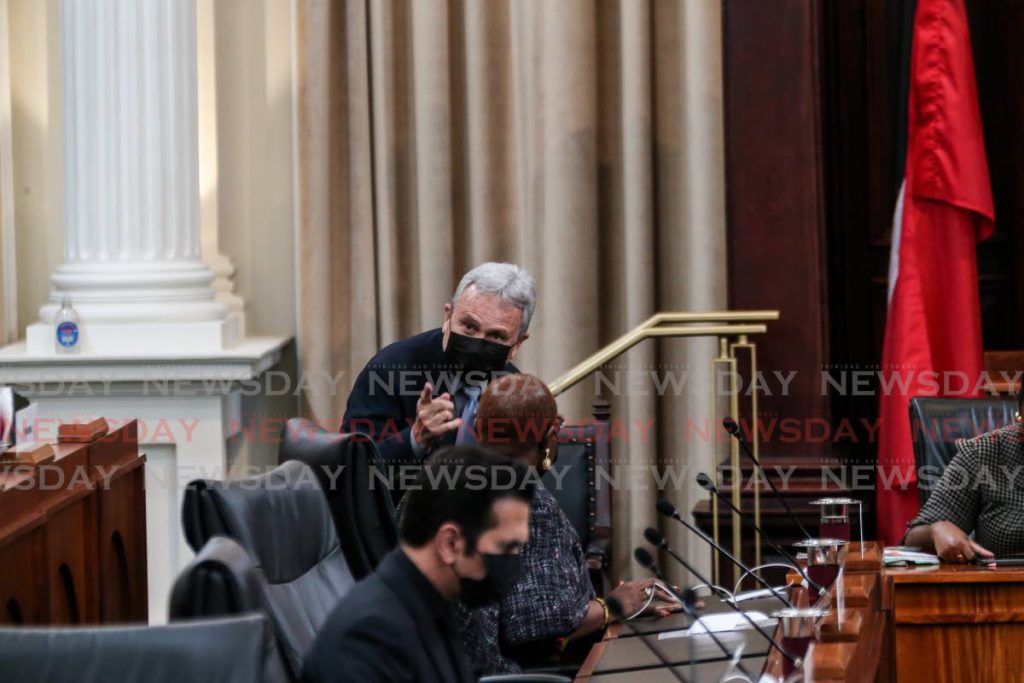 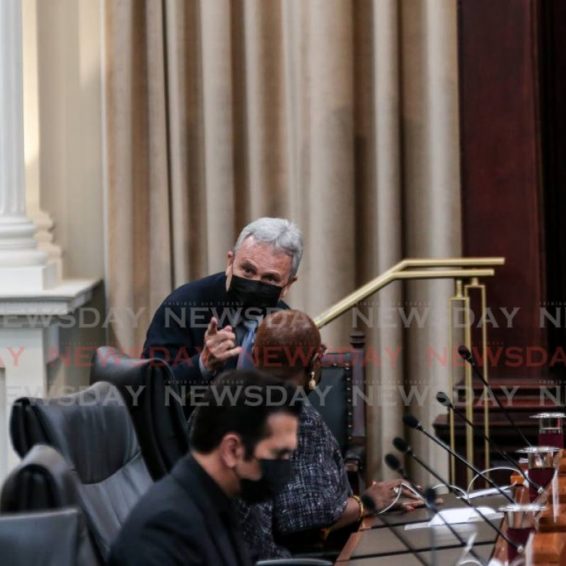 MP Khadija Ameen appears to be bored during the contribution made by MP Kennedy Richards on the 2021/2022 budget debate in Parliament on Saturday. – Jeff Mayers

THE Prime Minister and Leader of Government Business Camille Robinson-Regis led the PNM’s comprehensive condemnation of  Opposition Leader Kamla Persad-Bissessar’s claims that the 2022 budget debate in the House of Representatives ended within two days because of an alleged mutiny where some of its MPs refused to speak in support of Attorney General Faris Al-Rawi.

Imbert presented the budget in the House on October 4. The debate began with Persad-Bissessar’s response on October 8. The debate ended on  Saturday (October 9) around 6 pm, when no UNC MP rose to speak after PNM D’Abadie/ O’Meara MP Lisa Morris-Julian ended her contribution.

When there was no response from the Opposition MPs in the chamber to queries from Robinson-Regis, Deputy Speaker Esmond Forde and Speaker Bridgid Annisette-George on whether UNC MPs would be speaking, Imbert concluded the debate.

He said the UNC collapsed because they could not respond to any of the measures in the budget. Only ten UNC MPs spoke in the debate between October 8 and 9.

Persad-Bissessar, who was not in the chamber before or after the debate ended, issued a statement around 10 pm on Saturday to claim she had information that “some Government MPs refused an instruction to defend the Attorney General in their budget speeches.”  She claimed the PNM had collapsed and the UNC had MPs such as Dr Roodal Moonilal ready to speak in the debate. Persad-Bissessar accused the Prime Minister of cowardice for not being present for the debate.

Video footage from the Parliament Channel showed St Augustine MP Khadijah Ameen, the last UNC MP to speak in the debate,  talking to Moonilal before Imbert spoke. Moonilal then asked  Annisette-George (who had returned to the chamber at that time) to refer Al-Rawi to the House’s Privileges Committee for claims he made against Persad-Bissessar in his contribution. Imbert then ended the debate.

Dr Rowley, who like Persad-Bissessar was not in the chamber before the end of the debate, dismissed her claims of an alleged instruction to Government MPs to defend Al-Rawi, being the reason why the debate ended when it did.

“They were always more interested in Faris than the contents of the budget. They abandoned the budget for a motion of privilege against the Attorney General.”

At a PNM virtual meeting in Belmont on Friday night, hours after Persad-Bissessar made her accusations against Al-Rawi,  Rowley robustly defended him.

“I noticed the Opposition Leader has launched an attack on the Government and Office of the AG with respect to its efforts to fight white-collar crime.”

On Saturday, Rowley said, “Having focussed only on insults, personal attacks and damp squibs for ‘bussing mark’  they ran out of anything to add so they kept their seats. The debate was over.”

Rowley rejected Persad-Bissessar’s criticism of his absence from the chamber on Saturday.  He also indicated that government ministers will account for aspects of the budget under their respective portfolios when the House’s Standing Finance Committee meets.

“As for defending the budget, that continues from Monday to Friday of next week.”

The committee will meet as required under the its standing orders from Monday to Friday to deliberate on the budget’s provisions and approve the budget.

On Monday, the committee will examine expenditure and allocations for the Health Ministry, Education Ministry, Office of the Attorney General and Legal Affairs, Youth Development Ministry, Service Commissions, Personnel Department, Office of the President and the Judiciary.

The committee has five days to analyse the budget. The Senate is expected to begin its budget debate on October 18 but it is forbidden under its standing orders to discuss the budget in committee or vote on it, as it is a money bill.

Minister of Finance Colm Imbert talks with Minister of Planning and Development Camille Robinson-Regis during the debate on the 2021/2022 budget in Parliament on Saturday. – Jeff Mayers

Rowley also said he was not surprised by Persad-Bissessar’s claims that he  did not speak in the debate because he was afraid of her “pimps, imps, chimps and whimps.”

He said, “One thing you can say for the UNC is that they can put out lies and foolish statements.”

Recalling that Persad-Bissessar’s budget contribution on Friday lasted only two hours, Rowley said, “If that wreck could stand up for two hours then I’m sure I could stand for 22.”

Imbert’s budget presentation on Monday lasted four hours and Persad-Bissessar was entitled to speak for the same time as he did.

Robinson-Regis said because Persad-Bissessar was absent from the chamber, “Her team in order to continue their obeisance to her and her skewed version of reality have fed her a story that does not accord with the truth.”

She said Rowley trusts the integirity of his team, each and every member.

“There was therefore no instruction to defend the AG during a budget debate as there was nothing to defend.”

Robinson-Regis said Persad-Bissessar’s “nonsensical hour-long tirade about the AG during her budget response is testimony to the fact that this budget has met the acclamation of the widespread public.”

She said Persad-Bissessar “is seemingly unaware that (a) budget debate is not a time to for fanatical obsessions.”

Robinson-Regis said when Al-Rawi spoke in the debate after Persad-Bissessar on Friday, he “had masterfully dismissed her vain attempt to prejudice the public.”

Persad-Bissessar, she continued, “who is rarely in the Parliament, does not know that the standing orders permit all ministers, including the Prime Minister, a right to speak in both Houses (the House and the Senate).”

Asked about  recent debates on matters in the House (including budget debates) which have been shorter than usual when compared to similar debates in the past, Robinson-Regis said, “Bearing in mind that ministers of the government can speak in both Houses. There is no “strategy” that the government needs to tailor to deal with it.”

She said, “It is really for the Opposition to have the stamina to deal with a government that is always prepared.” Robinson-Regis added that UNC MPs “have consistently failed to speak after a few days of debate as usually they have nothing sensible to contribute.”

She said in Persad-Bissessar’s absence, Opposition Whip David Lee “tried to paint a picture that doesn’t accord with reality.” Lee, Robinson-Regis continued, “cannot suggest when we would adjourn and as I indicated to the Deputy Speaker the Minister of Finance needed a few minutes to gather his documents.”

Robinson-Regis said Forde and Annisette-George, when she returned  to the chamber, “called on the opposition members to speak.” She said, “Upon their refusal, despite having  nine members who had not spoken, she (Annisette-George) then called on the Minister of Finance who wound up the debate with aplomb.”

Robinson-Regis added, “Although it is quite amusing the alternate reality that the Opposition Leader has spun but it should be noted that video evidence exists confuting her falsehoods.”

In a statement on Saturday, Robinson-Regis said, “This Opposition has developed a penchant for not taking their role seriously.” The UNC, she continued, “consistently demonstrate a total lack of preparation and understanding of their responsibility to the nation.”

Imbert, who was in the chamber, supported the view that the debate ended  ecause the UNC collapsed. In a tweet, he said, “The Presiding Officer called on the Opposition five times to speak but they refused so I ended the debate.

Energy Minister Stuart Young in a Facebook post, said, “The UNC will never tire of dishonesty and trying to rewrite the facts to suit their false narratives.” Young, who was in the chamber, said  UNC MPs Moonilal, Saddam Hosein, Rudranath Indarsingh and  Lee (who were also in the chamber) “all refused to join the debate.” PNM MPs Fitzgerald Hinds, Foster Cummings, Symon de Nobriga, Kennedy Richards and Morris-Julian all supported the Government’s position on the reasons why the budget debate in the House ended within two days.

THIS was the sequence of events after PNM MP D’Abadie/ O’Meara MP Lisa Morris-Julian ended her contribution to the 2022 budget debate in the House of Representatives on Saturday, from video footage on the Parliament Channel:

Inaudible response from Lee and other UNC MPs in the Parliament chamber.
Forde, “Leader of the House (Camille Robinson-Regis), Chief Whip (Lee) ?”

Robinson-Regis to Lee, “You are not putting up anybody else at this time?”

Robinson-Regis to Forde, “Just give us a second please, the Minister (of Finance Colm Imbert) is getting his documents.”

Robinson-Regis goes behind the Presiding Officer’s chair, by herself. Imbert motions to UNC MPs. St Augustine MP Khadijah Ameen motions to him.

Ameen, “I feel like we are being misled Mr Deputy Speaker.”

Forde, “Members. The sitting is still in session.”

Lee stands up, makes gestures and inaudible comments to Forde.

Ameen, “What is happening? The Minister (of Finance) is present. He should be wrapping up.”

Annisette-George, “Okay. So there is no other speakers? Before calling upon the Minister of Finance, I will call upon the Member for Oropouche East”

Moonilal goes to a speaking booth behind the opposition benches and asks for Al-Rawi to be referred to the House’s Privileges Committee.

Annisette-George, “Honourable Members. I will rule at a subsequent sitting of the House. The Minister of Finance.

Imbert goes to the speaking booth behind the government benches to conclude the budget debate. Hosein speaks with Moonilal.

Annisette-George to Imbert, “Minister, you are reminded you have 45 minutes with no extension.”

Imbert concludes the budget debate and the House goes into Standing Finance Committee, to decide procedures of the committee’s meeting from Monday to Friday.