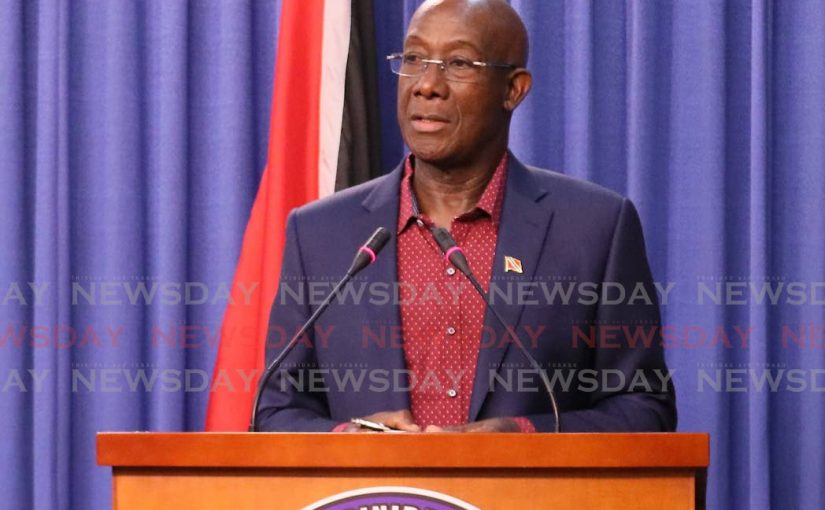 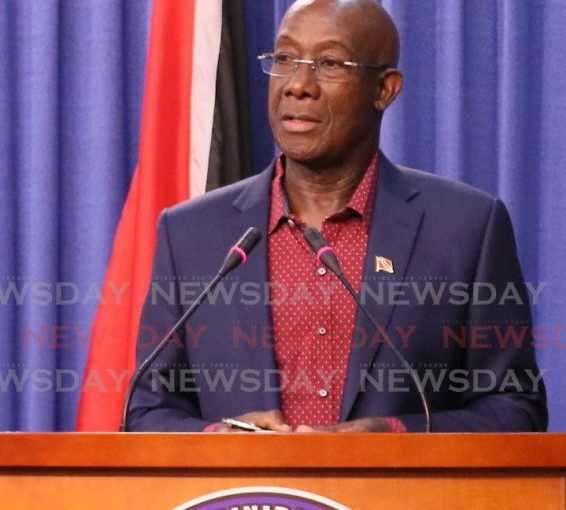 THE Prime Minister warned on Saturday that the parallel health care system set up to deal with covid19,is reaching its breaking point.

Dr Rowley issued this warning based on respective statements from Health Minister Terrence Deyalsingh and Principal Medical Officer Dr Maryam Abdool-Richards that the national vaccination programme had stalled and occupancy in the parallel health care system was around 86 per cent, with most patients being unvaccinated.

Should this happen, elective and non-elective health care for ordinary people will be compromised. Rowley said this could happen if people who are sick with covid19 wait too long to get treated, take the wrong advice from certain ill-informed entrepreneurs seeking to profit from the pandemic and then go to the hospital to be treated. He warned these people could contribute to “the collapse of the health care system.”

Rowley praised the medical personnel who have been doing their best to keep the public safe from covid19 and condemned attempts by anyone seeking to blame them for the increases in cases in recent times. “Nothing is furthest from the truth.”

He supported Deyalsingh’s statements about medical personnel being burnt out. Rowley disclosed that some have told him that they want to get out of the covid19 healthcare arrangements because the people they are caring for are not caring for themselves. While all this shows that TT is in a dangerous place where covid19 is concerned, Rowley said, “The automatic response is not to shut the country down. The response is to work harder to live with the virus.”

In this regard, the state of emergency (SoE) has fulfilled its purpose and will be lifted on November 17.

“It has been misrepresented in recent times that the SoE was the Government’s way of bullying the country into doing what the Prime Minister wants…and the Government could do what it wants… and it was to fight crime…and we have murders.”

He reminded reporters the reason for the SoE was only to curb the spread of covid19 through limiting congregations of people in public places and reducing physical movement, while efforts were made to acquire covid19 vaccines for the population.

“We have done that. The SoE gave us breathing room… that and the vaccination programme.”

The SoE was first imposed on May 15. The House met on May 24 to extend it to August 29 and subsequently met on August 25 to extend it further to November 29.

The process for ending the SoE is much simpler. Section 10 (3) states, “The proclamation (of the SoE) may be revoked at any time by a simple majority vote of the House of Representatives.”

Under the public health regulations which will remain in effect after the SoE is lifted, Rowley said, “Public fetes and parties, in all their forms, for the time being, will remain prohibited.” He remained concerned about the obsession of some people to party, regardless of the consequences it has for their health and that of the wider population.

While hopeful that beaches and rivers could be reopened in a controlled way by Christmas, Rowley said these locations and private residences (such as beach houses) close to them can be created into party zones and covid19 super-spreader locations. Rowley, who is also National Security Council chairman, disclosed, “I am hearing about persons making their homes…party zones..in some areas…on a nightly basis.” Rowley said these people are “not concerned about what we are concerned about…which is the spread of the virus.”

He condemned these people for being uncaring about the damage their actions inflict upon the rest of the population and tired medical personnel who have been battling to keep people safe during the pandemic for the last year and a half.

“All they are concerned about is that they have to party.”

The police will be expected to ensure there is rigorous adherence to the public health regulations, once the SoE is lifted.

“I am there appealing to law enforcement to let the full weight of the law to be brought upon persons who are undermining what we are fighting against.”

All businesses which have reopened to date, including those operating in designated safe zones (such as cinemas, bars and casinos), will continue to operate as they are now.

Public gatherings will remain restricted to a maximum of ten people and the consumption of alcohol in public remains prohibited.

Places of worship could increase their in-house capacity to 50 per cent for events such as christenings, funerals and weddings. For funerals, Rowley said the number of people allowed at the graveside will be increased from ten to 25. While beaches and rivers remain closed, pools will be reopened to vaccinated people.

He said while he understood concerns about children being affected by being unable to attend school physically, the current online and physical education arrangements will continue for the time being.

This story was originally published with the title “PM: Parliament to lift SoE on Wednesday” and has been adjusted to include additional details. See original post below.

THE Prime Minister announced that the state of emergency (SoE) will be lifted on November 17, some 12 days before it was set to expire.

Dr Rowley made this announcement even though Health Minister Terrence Deyalsingh conceded that the national covid19 vaccination programme has stalled and Principal Medical Officer Dr Maryam Richards said occupancy levels in the parallel health system (established to deal with covid19) now stands at 86 per cent.

They made their respective statements during a news conference at the Diplomatic Centre, St Ann’s. Referring to Deyalsingh and Richards’ statements, Rowley said, “We are in a very dangerous place.”

Notwithstanding the reality of medical personnel being burnt out and high numbers of unvaccinated people putting the parallel health care system under stress, Rowley said the response is not to return to any kind of lockdown but increase efforts to vaccinate the 600,000 unvaccinated people in TT and rigorously enforce covid19 protocols through the public health regulations.

Against that background, Rowley said all form of parties and public fetes remain banned, with police having the authority to crack down on any such events wherever they happen.

Beaches and rivers will remain closed for now. But Dr Rowley said public pools, where many people have therapy treatment, will be reopened only to covid19-vaccinated people. Contact sports also remain banned for the time being.

Capacities within places of worship will be increased to 50 per cent, in accordance with public health regulations. While the number of people who can assemble in public stays at ten, Rowley said 25 people will be allowed to be at the graveside for funerals.

Rowley said sectors of the economy which have been reopened, including businesses in covid19-safe zones, will continue to operate as they are now.

While acknowledging people’s right not to be vaccinated, Rowley said these people must also accept the consequences of not getting vaccinated.

The SoE was first declared on May 15. The House met on May 24 to extend it to August 29 and  subsequently met on August 25 to extend the SoE to November 29.

Under the Constitution, further extensions of the SoE require a three-fifths majority vote in the House and in the Senate. Such a scenario would require support from the Opposition.