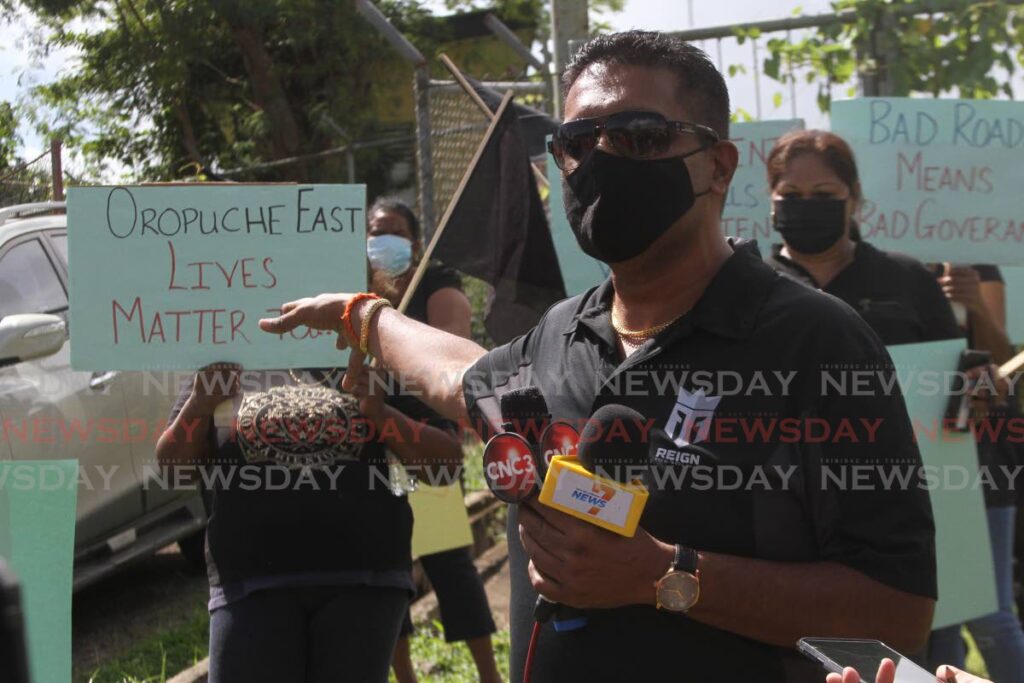 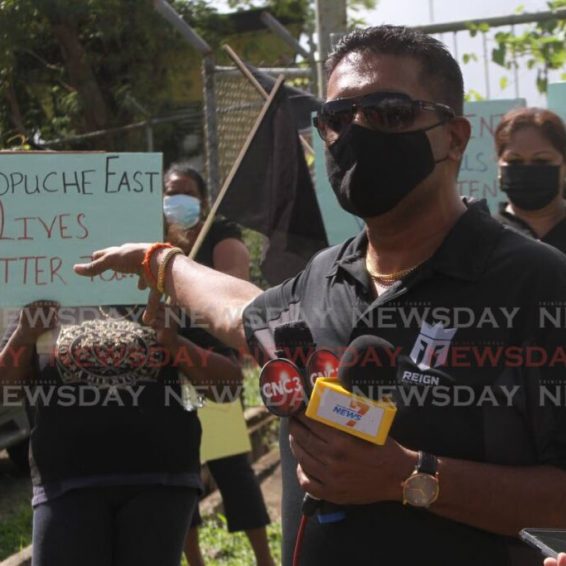 It is now the “People’s Revolution.” While it may have a new name, Moonilal promised the movement will be equally vibrant.

An irate Moonilal told the media, “We (the opposition) have been fighting for the completion of this school since 2015.

“This morning, we are calling through a peaceful protest in keeping with our People’s Revolution campaign…for the government to take action immediately.

“Parents have said enough is enough. This very peaceful and silent demonstration is to convey to the authorities that the construction of this school should be completed.”

In 2014, students of the old school were first relocated to Monkey Town Primary School in Barrackpore when the People’s Partnership government (PP) started rebuilding the school because of infrastructural problems.

But because of space issues at Monkey Town Primary, the students were then relocated to the Hanuman Milan Mandir on Penal Rock Road.

Construction of the new school was reportedly over 90 per cent complete when the People’s National Movement (PNM) won the 2015 election.

When Newsday surveyed the abandoned school compound on Tuesday, it was overgrown with bush, there were cracks in the walls of the main buildings and rusted materials littered the deserted classrooms.

“As a school is closed, a jail cell is open and therefore we must ensure that during this downtime the school is completed.”

Moonilal dismissed claims it was investigations into the activities of the PP government relating to the school’s construction which stalled completion of the work.

A group of protesters on Tuesday morning. – Marvin Hamilton

If this was the case, he said, there would have already been matters in court regarding the school’s construction, against former PP officials

“That is just a meek excuse for their victimisation and discrimination against the people of Oropouche East.

“When they (the PNM) came into power, they criminalised and demonised everyone associated with (PP) construction, whether it was paving roads, building schools or hospitals. They took an approach to stall all these projects because they were undertaken by the partnership.”

Instead, Moonilal said the government should be asking itself what it wasdoing with the funds that have been allocated for the past several years, in the national budget, to complete the school.

He explained, “In the budget documents (this year), we saw an allocation for the completion of this school.

Over the past several years, Barrackpore West Councillor Nicholas Kanhai told Newsday, Ramai Trace residents have been protesting about the issue.

Now, with the UNC’s “revolution,” Kanhai said, they feel they have a magnified outlet for their voices to be heard.

Kanhai said, “The UNC have started this People’s Revolution demonstrations throughout all constituencies, in all areas, where we feel that there’s been a heavy sense of neglect, we have been silenced, or there have been attempts for us to be silenced, in one form or another.

“Enough is enough. The time is now (when) citizens are mobilising and they’re attempting to have their voices heard.

Kanhai said he is aware that the Ministry of Education has allocated at least $34 million for completing the school this year. But given funding has also been allocated in other years, he is unsure if anything different will happen this year.

He lamented why six years had gone by since 2015 and the Ramai Trace Hindu School remains closed.

“Multiple peaceful demonstrations would have happened, promises after promises by (former) Minister Anthony Garcia and Minister (Dr Nyan) Gadsby-Dolly, but six years later and the school is yet to be completed.”

The school’s Parent Teachers Association representative Indar Jairaj said he was disappointed the issue of completing the school has gone on for so long.

Jairaj said he is left to feel that the best interests of the students are not being placed on the forefront.

Contacted for comment, Education Minister Dr Nyan Gadsby-Dolly told Newsday the PP government had awarded contracts for construction work on over 100 schools without a proper source of funding for the projects.

Gadsby-Dolly said these funding issues have affected the current government’s ability to complete these projects, which include the Ramai Trace Hindu Primary School.

She explained, “The government has approached this problem by batching the schools into phases and loan funding is sought for completion of each phase.

“The first phase of 13 schools cost approximately $140 million and is mainly completed, with outfitting being done at this time.

“The second phase of nine schools, of which the Ramai Trace SDMS is one, requires a further estimated $407 million in funding.

“The Ministry of Finance will arrange this as soon as practicable, and the Education Ministry will subsequently make the arrangements for work to restart on these schools.”