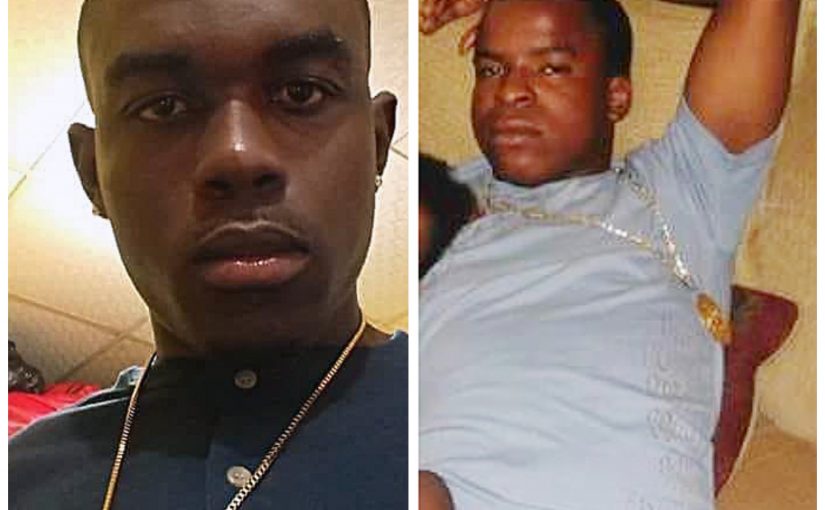 Kurt “Ratty” Smith and David Charles, both of La Puerta Avenue, were killed by men purporting to be police officers. Smith’s death, just before 9 am, comes almost a year after his elder brother, Curtis “Birdman” Smith Jr, was shot and killed on the same street.

Video footage of the double murder has begun circulating on social media, depicting the gruesome killing.

In the video, a silver Nissan Almera is seen pulling to the side of the road, with a white Hyundai Tucson close behind. The two cars stop and two armed men get out of the Tucson, dressed in khaki clothing and bulletproof vests and approach the Almera.

One of the men, later identified as Charles, was dragged out of the car and toward the Tucson. A third man got out and assisted the two gunmen. There was a struggle, during which Charles was shot. The gunmen then got back into the Tucson and sped off, rolling over the wounded man as they did so.

Charles died on the scene, while Smith died of his wounds at the St James Infirmary.

While police could not confirm or deny it up to press time, people at the scene told Newsday the drivers of the Tucson used a recording of a police siren to trick Charles and Smith into pulling their car over.

In August last year, Smith’s elder brother Curtis was standing at the entrance of a shop on La Puerta Avenue when gunmen got out of a Nissan AD Wagon and shot him multiple times. Investigators told Newsday that more than 40 spent shells were found.

Smith’s father, Curtis Smith Sr, was beside himself with grief yesterday as he looked at police processing the scene where his son was murdered. He told Newsday reporters he was so disturbed he did not know if he would be able to sleep.

Other relatives described Smith as a loving and giving person.

Newsday was told both Smith and Charles were contract workers.

Suptt Neville Sankar yesterday told Newsday Homicide detectives are looking at every angle to bring the killers to justice and will try to trace the licence plates, which were seen in the video footage, and find out if there is a connection between Smith’s murder and his elder brother’s.

“We do not want residents to lose confidence in us,” Sankar told Newsday. “We have been making lots of inroads in building relations with the public. We want them to know we take this incident as seriously as any other, and will do everything we can to bring the perpetrators to justice.

Sankar said anyone with any information that could lead to this case being solved can call 555, 999, 800-TIPS, or the nearest police station.

The murder toll for the year now stands at 340.

Wed Aug 15 , 2018
Twenty-one young men and women from Laventille between the ages of 15 and 27 are expected to receive training on a variety of vocational skills from welding to masonry over the next six months at the Laventille Institute of Science and Technology. The programme which is the latest brain child […]