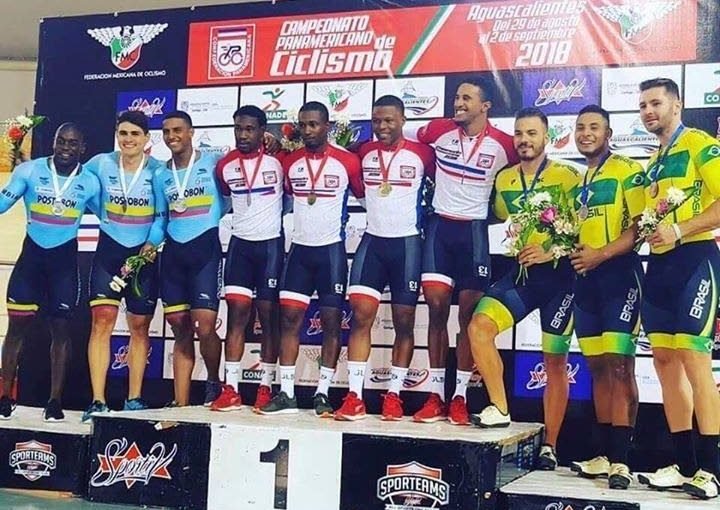 NATIONAL athletes continue to provide citizens with pride and joy, as the TT men’s cycling sprint team gave this country an Independence Day gift on Wednesday night, winning gold at the 2018 Elite Track Pan Am Championships in Aguascalientes, Mexico.

Multiple records have been broken at the high altitude track in Aguascalientes, and TT created history of their own with a stellar performance.

In the final, the trio of Nicholas Paul, Njisane Phillip and Kwesi Browne won gold in 42.849 seconds, finishing ahead of Colombia which had to settle for silver in 43.095. Earlier in the qualifying round, the trio of Phillip, Browne and Keron Bramble broke the national record by stopping the clock in 43.155.

In the semifinals, Phillip, Browne and Paul broke the national record again and broke the Pan American record with a time of 42.681.

Alexi Costa also copped a medal for TT in Mexico. Competing in the women’s scratch race, Costa was eighth in the Elite Track Pan Am Championships, but her effort was enough to place third in the 2018 Caribbean Track Championships which is taking place simultaneously.

Rowena Williams, racing secretary and former president of the TT Cycling Federation (TTCF), was elated that the men’s sprinters continue to excel, especially as they started earning qualification points towards the Tokyo 2020 Olympic Games.

Williams said, “For us it is a great achievement, having gone to the start of the qualifying for points for the Olympics. I think it is great achievement for the guys, and I know it is going to boost them and give them that extra to want to push harder. All credit to them and the hard training they have been doing with their coach.”

The cyclists coach Erin Hartwell, who is also the TTCF technical director, expressed his delight on twitter saying, “Pan Am record and gold medal in the first event of Olympic qualifying! Great start to the Pan Am Championships @TTOlympic @TTCyclingFed elite squad! Onward!”

Fri Aug 31 , 2018
TRINIDAD AND Tobago women football team coach Anton Corneal is looking forward to the challenge of hosts Jamaica today, when both teams square off at the National Stadium, Kingston from 10 pm (TT time). TT have a record of two wins from two games in the CONCACAF Caribbean Women’s final […]