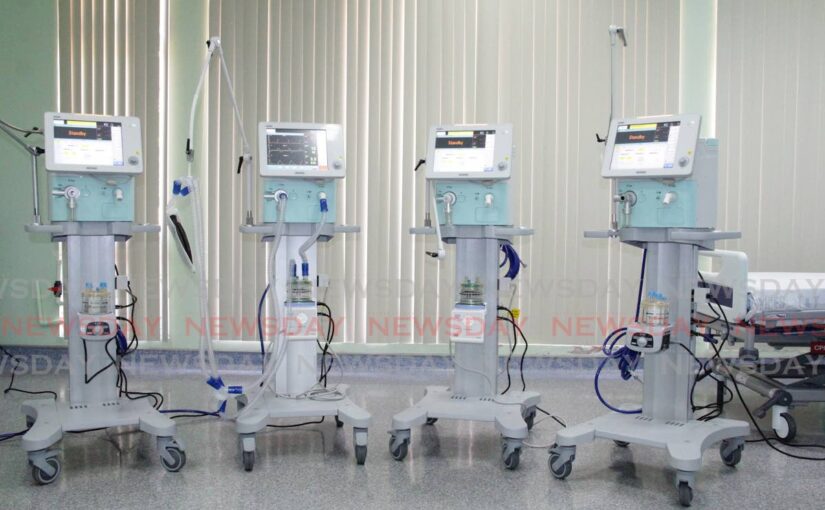 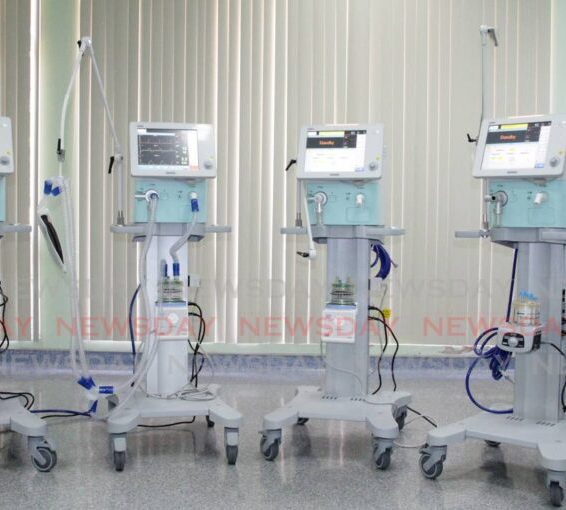 Ventilators similar to these four are being used in the parallel health system in the treatment of critically ill covid19 patients. FILE PHOTO –

TT’s total ventilator capacity has increased to 77, with the addition of 12 new ventilators specifically for use in treating covid19. The ventilators, which cost $108 million, were imported at no cost to the Health Ministry.

“Per directives from the Minister of Health, 12 Mindray SB-300 ventilators, which are ventilators specific to treatment of critically ill patients with the complications of covid19 were delivered to TT, and into the hospitals in the parallel healthcare system. The commissioning process started within 24 hours. These ventilators were imported, procured and approved within three working days, instead of the usual one-month period.”

She said there was no cost to TT to import the ventilators as, with the cooperation of the National Security Ministry, the Air Guard flew to Guyana to collect the ventilators from a TT supplier. She said procurement was carried out in line with RHA and Health Ministry standards.

“These new ventilators are being commissioned and activated on a phased basis, with all in use by the end of the week.”

She said the capacity of the Sangre Grande Hospital was increased from seven to nine beds, the Eric Williams Medical Sciences Complex by five beds, the Arima General Hospital from 13 beds to 15 beds, and the Couva Medical and Multi-Training Facility increased from 26 to 28. She said this has taken the total number of ICU beds in Trinidad to 70, with 7 in Trinidad and Tobago, for a total of 77. In April, Health Minister Terrence Deyalsingh said there were 69 ventilators allocated for use in the parallel health care system.

Abdool-Richards said the current rolling average is at 517, with 539 patients in hospital and 106 in stepdown facilities, for a total of 645 patients. She said this is the highest recorded number, as the previous highest overall recorded number in the last wave was 627.

She said there has been an increase in hospitalizations consistent with the increase in the rolling average and an increased demand in patients who need ICU care on any given day with 11-44 per cent of patients requiring care at an ICU level. She said ICUs in Trinidad are at 88 per cent and at 71 per cent in Tobago.

Abdool-Richards said as of Monday, there were two paediatric cases in the parallel system, one of which was in ICU.

She said ICU capacity is being increased in two ways – “through the GMRTT ambulance service and improving that process, that happened on Wednesday, and the inter-facility transfer, secondly through increasing the ICU capacity at the accident and emergency A&E over the last week.”

She said over the next three weeks, the ministry hoped to increase ICU capacity again over the next three weeks, with “the Couva Medical and Multi-Training facility, on a phased basis and based on demand, two additional beds followed by another two, at the Augustus Long Hospital transition with respect to ICU demand, ward level beds being converted to five additional ICU level care beds, the area hospital in Pt Fortin an additional six beds, the St James Medical Complex an additional two beds and then in Tobago the process to increase the ICU capacity from seven to 13 beds. This represents an increase of 17 additional beds in Trinidad and seven in Tobago.”

Deyalsingh said increasing the number of ICU beds was made easier due to the fact that the emergency operation centres attached to each of the five RHAs were being controlled centrally by the ministry as of two weeks ago.

“This is a useful tool in an emergency or crisis when managing mass casualty events, to find or manage scarce resources, work with other state actors, find and corral scarce resources and send them to where you have an emergency to mitigate risk or prevent something happening. It is this approach we used to set up 13 new ICU beds this weekend. We were able to save seven-ten days in operational time, which would be the normal rate in bringing up these ICU beds in a non-emergency system.”