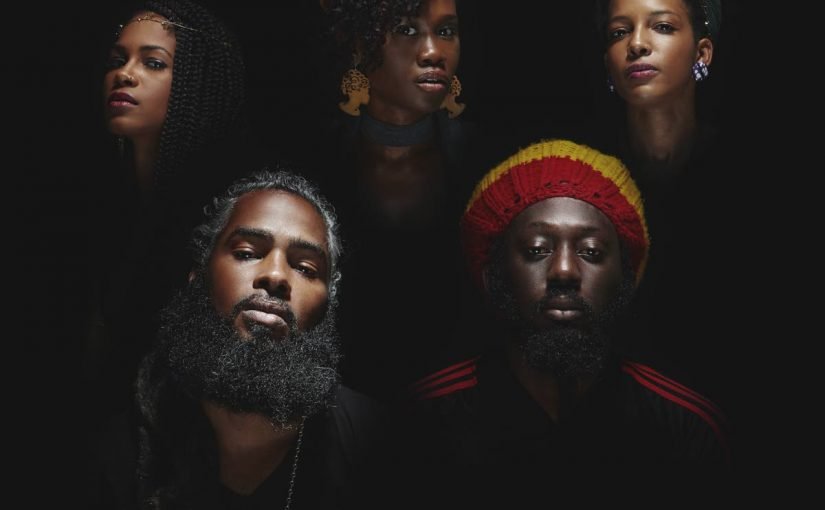 MUHAMMAD MUWAKIL constantly reminds himself of this quote: “In me, I feel a spirit so vast that all of human tragedies is a brief scar on my arm and the ocean is a teardrop not yet shed by my sadness or joy.”

He knows that within him there are universes and worlds yet to be explored. So it might be easy to correlate Freetown Collective’s first studio album with Muwakil’s unexplored universes. He is not only the band’s lead singer but also writes, plays the guitar and wrote all the choruses on the album.

The 34-year-old spoke to Newsday days before the launch of the band’s first studio album, Born In Darkness. Although they also put out an album for the movie God Loves the Fighter, a mixtape and released a few singles such as Believer –with Major Lazer, and Born Soldiers – with Bunji Garlin, this is their first studio album. Lou Lyons, Malene Joseph, Shanna Joseph and Tishanna Williams and Jayron Remy (DJ Rawkus) are the other members of Freetown Collective. The band will host a concert to launch the album at the Callaloo Company, Western Main Road, Chaguaramas, tomorrow from 7 pm. There will be two opening acts; spoken-word poet Deneka Thomas and rapper Rheon Elbourne. Freetown, Muwakil said, should be on stage by 8 pm, and its planned set is due to run for an hour and 20 minutes.

Its songs are “the reality of our own situations. Songs of hope. Songs of redemption. There is some heartbreak in there, for sure,” he said with a slight laugh. “But ultimately songs of hope and resistance.”

It has taken three of Freetown Collective’s seven years to put the album together, with the help of producer Keron “Sheriff Mumbles” Thompson.

But this album is more significant than being just being the band’s first studio album. It is more significant because it is an addition to “the sound that we have now.” People know Freetown as “an acoustic sound, basically just guitar and voices,” Muwakil said, But within the last year, the band has added “a lot of up-produced elements” to its music. By that he means “drums, bass and that kind of thing…to create a larger sound to be able to take bigger stages.”

While it introduces the band’s bigger sound and is also aimed at creating more touring opportunities, Muwakil hopes it paves the way for more international collaborations as well.

Even grander than the band’s bigger sound and touring opportunities is its aspiration to “change the way that people view music in the region, if not the world.”

Muwakil wants “to go back to a time where the lyrics of songs are equally as important as the music.”

“I think we have kind of come to a time with disposable music. One day the song is here and it is huge and the next day it is gone. We don’t live in a time of classics any more,” he said.

The album is the band’s evolution toward that.

“We really hope to inspire a generation to begin to pick up their guitars again and play their live instruments and write music that relates to them and not just write music for a waiting audience, in the form of soca.”

“And so we find our people relying a lot on dancehall and on reggae to deal with their everyday life. The unfortunate thing is that a lot of the dancehall themes have become quite destructive…So we have to create an alternative. It is not to say that music is bad, but if there is no balance, there will be imbalance. And imbalance is destruction.”

He is surprised that the global shift in serious and conscious music has not been adopted by TT. Beyonce, Chance the Rapper, Childish Gambino and other international acts have been “tackling some real serious issues.”

Black excellence, he said, is being promoted and supported globally in a very serious way. “We are looking at things like Black Panther…a lot of black leads, and just the way that the artistic world is changing – it surprises me that we are still attaching ourselves to the negative part of the wave.”

TT has had “something of a 20-year gap, if not wider, of positive strong social content,” he said, but artistes like Voice and others have been “pushing something” with the soca.

Freetown Collective, in his view, is not a rapso band but rather performs an evolutionary form of calypso.

“As far as our music goes, we draw on a lot of influences. But primarily, we are story-telling music. Which means that we are calypso, because calypso has always carried the story of the people,” he said. “As far as our genre goes, I am more than convinced we are an evolutionary form of calypso, whether or not people want to agree to that or not. We use a lot of elements that are not specifically Trinidadian or even West Indian but we are telling the stories of our people. And that is what is important to me. And we are telling it authentically.” And it is a voice that reaches across generations, he said, as Freetown considers its audience to span from one to 95.

For calypso to reach the people again, he believes a revolution is needed.

“If calypso refuses to evolve…we living in a time where a song is three and a half minutes long, max, and it is becoming less and less. That three and a half does not get played on radio: 30 seconds gets played on radio. Calypso cannot work. The format of it is not going to work…You have to come up and I think a lot of people see that as breaking with tradition. But sometimes tradition needs to be broken. It needs to be smashed…”

Recalling when the band started seven years ago, Muwakil said, “My brother and I, Lou, the motto was ‘What box?” People would always say, ‘Think outside of the box,’ and we would literally say to each other ‘What box?’ What is anybody trying to tell me what I can or cannot do with this life I was blessed with?

“At the time people would say we can’t sing and we can’t play guitar properly. It was a lot.”

Before Freetown, Muwakil was a civil engineering student at the University of the West Indies, then changed his major to literature with a minor in international relations. He did not finish his degree, but instead when he left UWI, Freetown was born. He had not even played music before. “We just jumped off a cliff, because it was something that we wanted to do.

“I had a guitar that I bought and was trying to learn to play it for about a year before. We started the band when I finally figured out how to sing and play and I wrote my first song. The first song was what started the band.”

The post Toward a bigger sound appeared first on Trinidad and Tobago Newsday.

Fri Jun 29 , 2018
SOME police are afraid to go to work at the Siparia police station considering that just days after a colleague became infected with tuberculosis (TB), another has fallen ill. Although officials from the Health Ministry sanitised the station at High Street in Siparia, some police believe that more should be […]