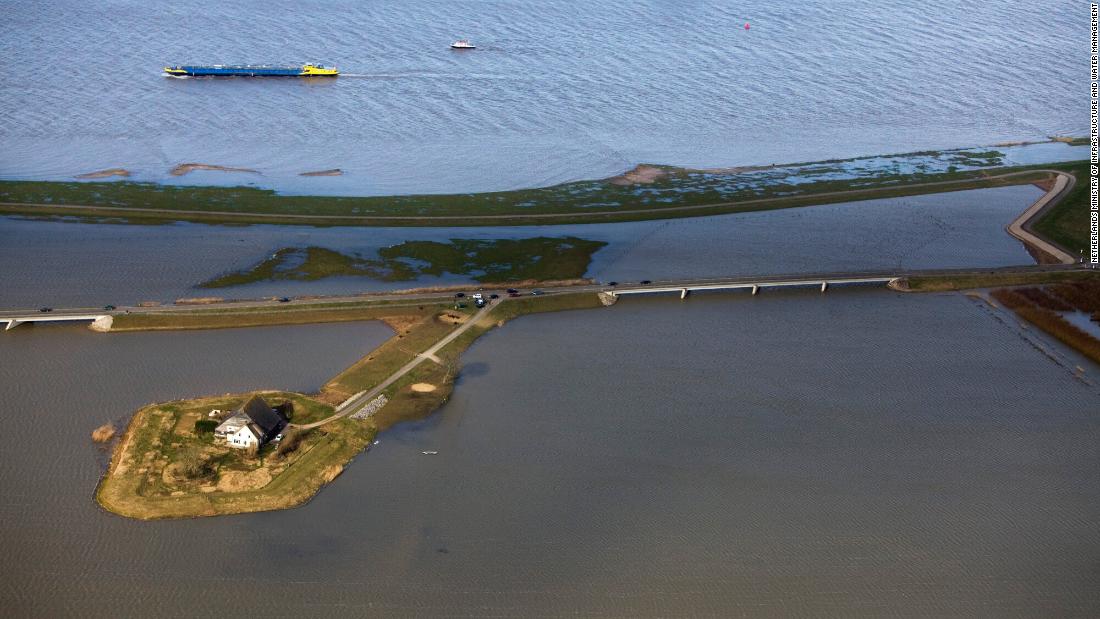 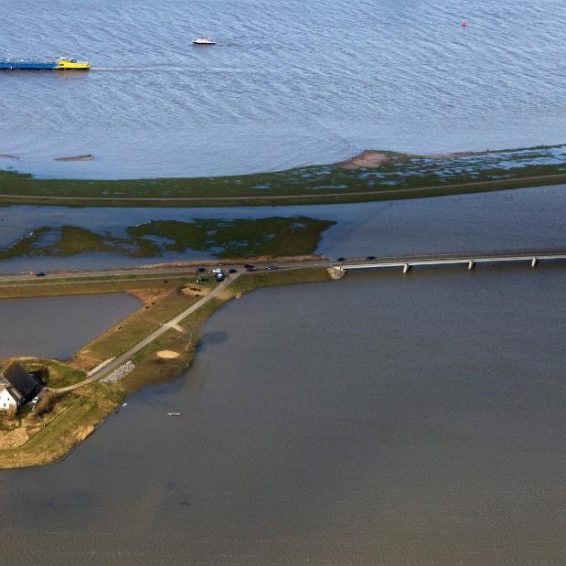 The Dutch are masters at taming water. Climate change is teaching them to just let it flood

3 months ago·7 min read
ShareTweetPinShare
Home
World News
The Dutch are masters at taming water. Climate change is teaching them to just let it flood
The content originally appeared on: CNN
She loves the vista. She loves docking a boat just strides from her vegetable plot. She loves spotting eagles and beavers. But there is a reticence to her joy.
“The mixed feeling is that it was my neighbor’s land,” van Lelieveld says. “I’m sad because I know how sad my neighbor is. Because he was giving up his land.”
What used to be her neighbor’s farm, walled off from the nearby river that posed a constant threat, is now pockmarked with water. It is flooded, purposefully, to soak up water when the river swells. It’s not suitable for farming, but Van Lelieveld is able to live here. A simple small dike keeps her home and some others on the street dry, even if their backyards are not.
This is all part of an ambitious climate project aptly called Room for the Rivers.
Read More
The Dutch have battled for centuries to keep water off the land in their low-lying country, more than a quarter of which lies below sea level.
While “adaptation” sounds like a dull word in climate talk, the Dutch have been adapting to the whims of water for a long time. Pumps, dikes and giant moveable seawalls protect the country, at least half of which is threatened by floods.
Nothing about the Dutch example is perfectly replicable: Its landscape, tradition of political powersharing, and water-aware culture are unique. But there’s a lot to be learned.
The climate crisis is only intensifying that vulnerability. Erratic weather is no longer a problem for the future — it’s clearly here, in most parts of the world — nor is it a problem just of extremes, like blazing forest fires and flash floods. It’s also a matter of getting organized, as governments and people make life-or-death decisions now for potentially worse threats arriving in an even warmer world.
Dutch expertise has come in handy for people running into trouble with water around the world. In the 17th Century, King Charles I asked a Dutchman, Cornelius Vermuyden, to help drain the marshes in England’s Cambridgeshire. When New York City was devastated by Hurricane Sandy in 2012, the US Government turned to the Dutch for help. When the Ever Given ran aground in the Suez Canal, a Dutch company was contracted to get it out.
But climate change means that these brute-force methods that have worked for centuries won’t always cut it. A dike can only be so large before it collapses under its own weight, and heightening it only increases the risk when it fails.
In the 1990s, the Dutch government started to change tack, better understanding that the natural state of bodies of water exist for good reasons. One example is low-lying, uninhabited land next to rivers that could flood and help absorb water when it rains heavily upstream.
That meant doing something unusual for the Dutch: knocking down some of the walls that once held back water, and moving people off the land.

‘This is the result’ of climate change

To understand why the project is so vital, right now, the headwaters of the rivers that empty into the Netherlands offer an insight.
Some 300 kilometers (186 miles) up the Rhine River from Van Lelieveld’s humble house lies the Ahr, a tributary that snakes through picturesque hills of west German wine country.
It was here in July that floodwaters rose higher than they ever had in the collective memory of Dernau, a small town nestled between steep slopes of vineyards.
“It’s not easy to finds words for it,” says Lea Kreuzberg, 23, who on July 14 was sitting in her apartment above the winery she runs with her father.
Dernau, in Germany’s Ahr Valley, was devastated by flooding in June. Credit: Martin Bourke/CNN
In the space of just a few hours, floodwaters spilled into the courtyard, submerged the ground floor, and rose into her apartment. Kreuzberg, her boyfriend, and two winery employees retreated to the building’s top floor.”
They spent a terrifying night together, preserving phone battery to communicate with Kreuzberg’s father, who was on vacation in Austria. The water finally peaked, then slowly subsided. Finally, at 5pm the next day, they were rescued.
“In the first days, the rain made me feel very uncomfortable,” Kreuzbberg said, referring to the time immediately after the floods. “When it started raining a bit more, the emotions came up again and I start crying,” she added.
“When we will go back here, it will not be easy to live here without being afraid.”
The human impact of July’s flooding was devastating. In the state of Rhineland Palatinate alone, it killed 133 people. In total, 180 were killed in Germany and 39 in Belgium. One victim was never found.
Nearly 15 centimeters (6 inches) of rain fell in a single 24-hour period from July 14 to 15, according to The European Organisation for the Exploitation of Meteorological Satellites, causing widespread damage not only in Germany and Belgium, but also in France, Luxembourg, Switzerland and the Dutch province of Limburg.
The region is no stranger to floods. But EUMESTAT said that July’s rainfall was “particularly devastating” and that those kinds of intense storms “are becoming more likely with changing climate.”
To Franziska Schnitzler, standing in the ruins of her family hotel and restaurant, that connection is clear. The 350-year-old, timber-frame building it once occupied was deemed unsafe and torn down.
“We do live with the climate change,” Schnitzler says. “And this is the result.”
And for young and old alike, climate change is intersecting with a crisis of mental health. In the days after the floods, three people in Dernau took their own lives.
“It was the grandma of one of my best friends,” Schnitzler says. “One night she woke me up and she said, ‘My grandma, my grandma, my grandma.'”
“That was so hard, to lose someone after the flood.”

A wake-up call for the Netherlands

The people who have given up their homes and land in the Netherlands did it not primarily for themselves, but for others. They were asked to sacrifice to protect people in cities up- and down-river, for whom floods pose a much more acute threat.
It was major flooding from rivers in 1993 and 1995 that served as “a wake-up call,” says Hans Brouwer, who for years has managed projects for the Dutch government’s Ministry of Infrastructure and Water Management.
“We focused for decades on the sea, and defending us from storm surges,” he recalls. “And then we were surprised by our rivers. And in ’95 the decision was made to evacuate a quarter of a million people. So that really made an impression.”
Those floods coincided with some of the first reports from the United Nations’ Intergovernmental Panel on Climate Change ringing the climate alarm bells.
“We realized that we can expect even more water from the rivers, and at the same time it would be difficult to get rid of that water because of sea-level rise,” Brouwer said.
Nol Hoiijmaijer’s farm was relocated to a 20-foot-high mound, so that the surrounding fields could be used as a floodplain. Credit: Martin Bourke/CNN
Some 15 years ago, Brouwer’s colleagues came to Nol Hooijmaijers, a dairy farmer, and told him that that eye-shaped spit of land that he and 17 other families called home would soon need to be turned into a floodplain.
“We had been through ’93 and ’95. So we did think that something would have to be done at some point. What that was, we didn’t know,” Hooijmaijers, now 72, said. “Then when the government came and said that this area might be used as a floodplain, yeah, that was of course a huge shock.”
“We had been convinced that we could stay here and farm for generations.”
He and his fellow farmers got together and decided that would “try to turn a threat into an opportunity.”
While some left rather than deal with the heartache, Hooijmaijers, his wife, and seven other families decided to stay. They convinced the government to build enormous, six-meter-high artificial dwelling mounds, or “terps,” on which to relocate their farms and houses. The northern dike that had protected their land was in turn lowered, allowing floodwater to spill over the land.

Change, ‘even when it breaks your heart’

The Room for the Rivers project was a monument to planning, foresight, and what can be achieved when government and citizen engage in collective action. Thirty-four projects — coming in at a total cost of $2.66 billion — mean that Dutch rivers can now absorb about 25% more water than they could in 1995.
During July’s enormous rainfall, van Lelieveld watched as the river swelled, picked up speed, and turned brown from silt and debris.
“It’s then that you can see the function of the region, because we didn’t have any issues with high water here,” she said. “I hope that people understand that, what I have sacrificed to do that.”
Brouwer described a “paradigm shift” in which engineers realized “we don’t even always understand how nature acts, but we take nature seriously.”
The design for the area in which van Lelieveld lives, he explained, was based on a century-old map — “not knowing exactly why it functioned in that time, but having confidence that nature took the right choices.”
The project created the wetlands that flooded her former neighbor’s farm and are now home to vast flocks of birds. When she goes out in her boat, she thinks of the struggle that the farmer waged to get decent compensation for his land.
“On the one hand, I don’t dare to enjoy it, because I also experienced that sadness, and saw what it did to people,” she said.
“But on the other hand, I’m very proud of what we achieved in this region. And that we can also be an example, that it’s possible.”