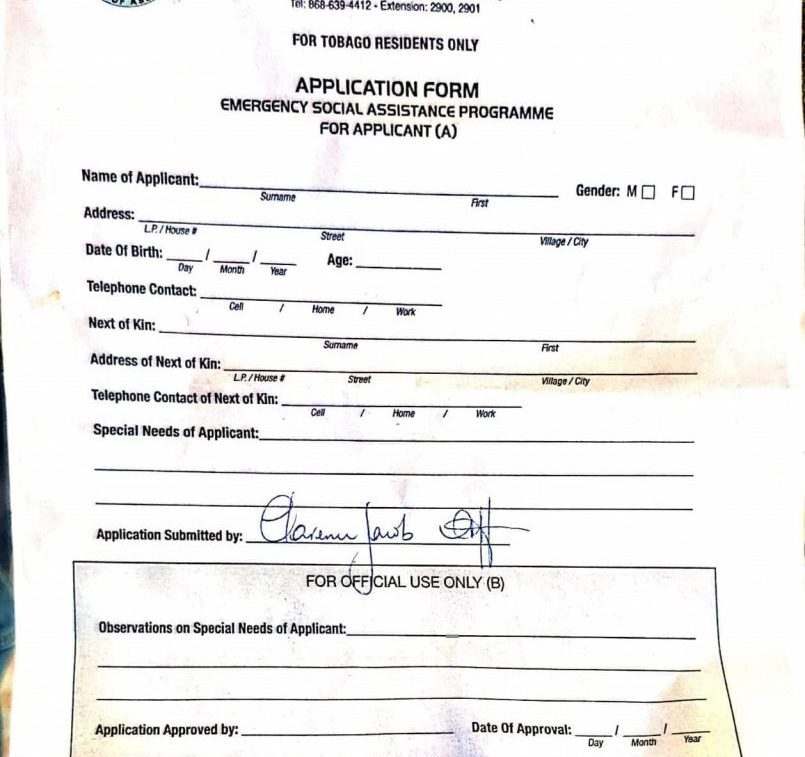 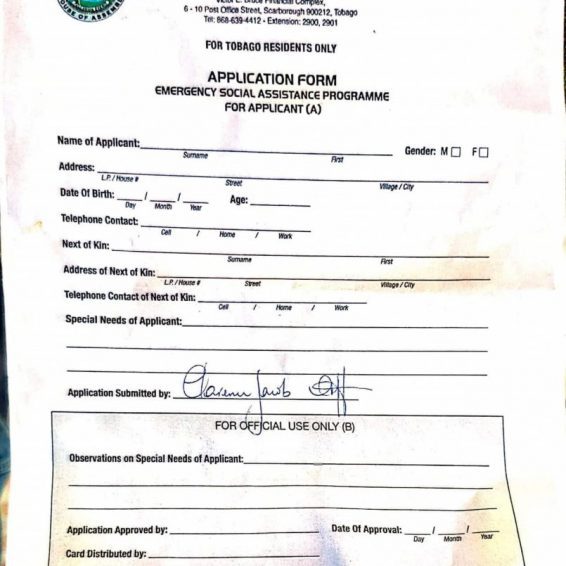 LESS than 24 hours after THA secretary Clarence Jacob came under heavy criticism for comments on distributing “hundreds” of food cards, the PNM candidate for Bon Accord/Crown Point has admitted to signing blank food card forms, to expedite the process.

The issue of food cards has been a hot topic on the political platform in Tobago, even prior to the general election in August last year.

The Progressive Democratic Patriots (PDP) has accused the PNM of using food cards to buy votes.

PDP deputy Dr Faith BYisrael over the weekend posted a food card form on Facebook with no other information on the document other than Jacob’s signature.

An Auditor General’s report, which covered October 2019 to September 2020, raised serious concerns over the management of food cards, including lapses in key areas to provide checks and balances in the programme.

In an interview with Newsday on Monday, Jacob admitted that the signature affixed to the document was his. But he insisted that he has documentation and evidence to prove the right process was followed.“Once you comfortable in your heart what you’re doing is right, you don’t have to feel no how,” he said.

“That is the official process, and what I realised is some people put stamps and if you watch carefully, you will see that it was prepared by me. I come as the authorised person for my office to give the authorisation for sending the cards (to) Victor E Bruce (Complex) (Division of Finance and the Economy).

“It comes easy like this, if I am not around and somebody comes to apply for a food card and there are no signatures on the application form, then the food cards will not be processed.”

He said after putting his signature on the blank form his staff would assist those interested in filling out the application.

Jacob: PDP does the same thing

Jacob said this is another “useless” attempt to assassinate his character to hamper his chances before the polls on December 6. He alleged a PDP assemblyman did the same thing.

Responding to the claim, BYisrael said, “We do not sign blank forms. Our forms are submitted to the Division of Finance and the division directly contacts the applicants and the division deals with them. We don’t collect or distribute…It’s clear the process is not the same for us.”Jacob does not believe the issue will affect his chances in the election.

“People know we are transparent and honest, and I have no fear this would cause any kind of disruption. The process is a transparent process. There is no bobol involved. “I don’t see anything wrong with assisting as many people as possible in this pandemic.” Contacted on the policy and procedure for completing a THA food card application, processing the application and the requirements for approval, Finance Secretary Joel Jack asked for the request to be e-mailed.

No response was received up to press time on Monday.Addressing the issue, Chief Secretary Ancil Dennis said the signing of blank food card forms was something “I will advise against.”

But he also raised questions about food cards with PDP assemblyman for Plymouth/Golden Lane, Zorisha Hackett.

“There was a document being circulated which alleges that persons employed at her office where food card applications were submitted, bearing again the stamp of the assembly of that district – that’s the challenge where there are persons who do not deserve a food card but yet an application was submitted for such persons.”

Dennis said a food card application form requires a person’s name and address before screening by the finance division.

John to report on gun licences next week

A food card application form with the signature of THA secretary Clarence Jacob.

If the application is approved, “a number would be generated with the card and the person to which the card is assigned. That is then sent to the point of collection…On collecting the card the individuals must present ID and also sign for collecting the card“The issues are persons would misrepresent their circumstances.”

He said he planned to revisit the procedure “to ensure we maintain a level of control” without making the process difficult.

“It cannot be bureaucratic to an extent where people who really need the support are being frustrated. It is a one-off food card of $500 and therefore I am not going to support a situation where someone is being asked for their blood type, financial statement to get a one-off food card for $500.”

But she told Newsday there was an instance where workers employed under her office went without pay for two months and applied for food cards. She accused the PNM of scampering to find scapegoats.

Police: It’s an opportunity for fraud

A Fraud Squad division officer told Newsday while the simple singing of a blank document, cheque, or application would not be a fraudulent act, it can provide an opportunity for fraudulent activityIf false information on the signed form isn’t fact-checked and the application is processed and approved, fraud has happened and a criminal investigation would initiate. He said, “Signing a document, cheque, application form, is not fraud, but it certainly provides an opportunity for fraud. “What that would amount to would be a bad procedure, contrary to some policy or contrary to whatever the procedure is. Now, if someone takes the blank pre-signed document and inserts information that for example, where someone did not go through the approval process and it appears as though that signed document amongst to approval and they know very well that is not the case, then that now becomes a fraudulent act.