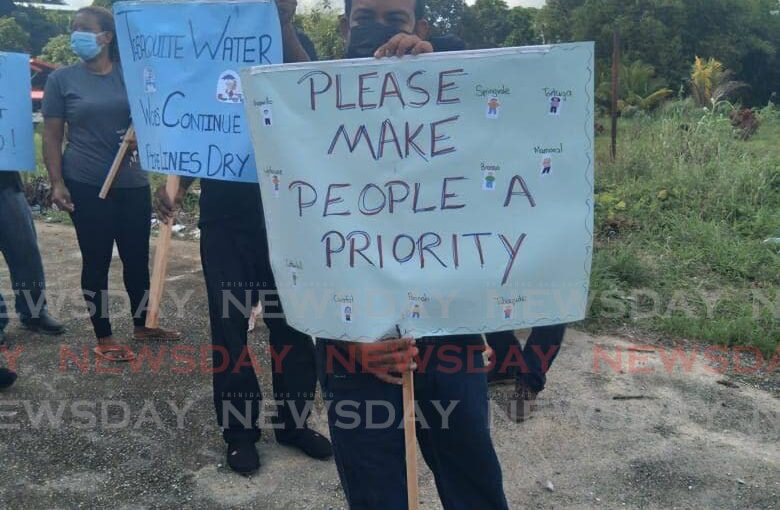 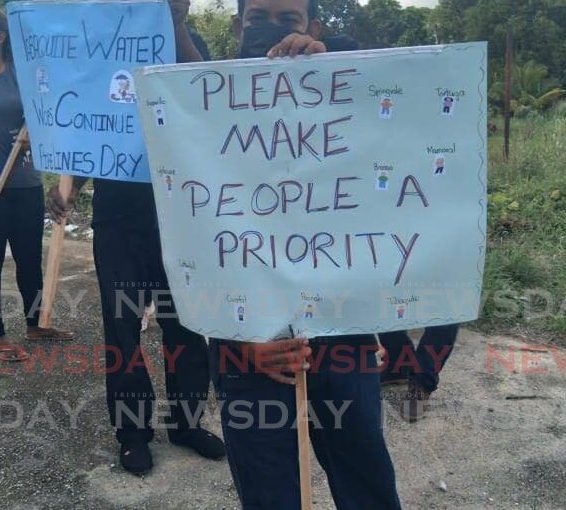 Nigel Ramharack pleads for the Ministry of Works to repair the Monre Roche Quarry Road, in Williamsville during a protest on Saturday. – PHOTO BY LAUREL WILLIAMS

Tabaquite MP Anita Haynes has said her constituents are fed up and at their breaking point because of the lack of basic infrastructure in the rural constituency.

At Morne Roche Quarry Road, Williamsville, the opposition MP led a placard protest on Saturday to highlight the bad road conditions. She also visited areas in Gasparillo like Caratal and Light Bourne Road, where residents complained about landslips.

“We will continue to take action in as many forms as we can to ensure that our basic needs are met. It is unacceptable that the government thinks that people should live like this,” Haynes said.

“If the Minister of Works (Rohan Sinanan) cannot do his job, it is time for him to go. The residents have been having these problems for over five years. We would get maybe some mobile patching, but there is no sustained work.”

Chairman of the Couva/Tabaquite/Talparo Regional Corporation Henry Awong and Gasparillo/Bonne Aventure councillor Safraz Ali also joined with the residents to highlight the pothole-riddled roads and other issues.

Resident Nigel Ramharack said the roads caused him to spend more money to repair his car.

“There are a lot of potholes, and it is really terrible. We need the roads fixed.”

Awong said the Morne Roche Quarry Road falls under the Works Ministry’s highways division and not the corporation.

“They (ministry officials) have one story every time —there are no resources. They have no materials, no tractor, no truck, no backhoe and their workers are seriously understaffed,” Awong said.

Like Awong, the councillor pleaded with Sinanan to intervene and fix the road.

“Do your work or step down or let someone capable do the work. Put down your foot and fix this road and the others in the Tabaquite constituency.”

“It has been three weeks since residents have had a water supply from WASA. We feel very neglected.”