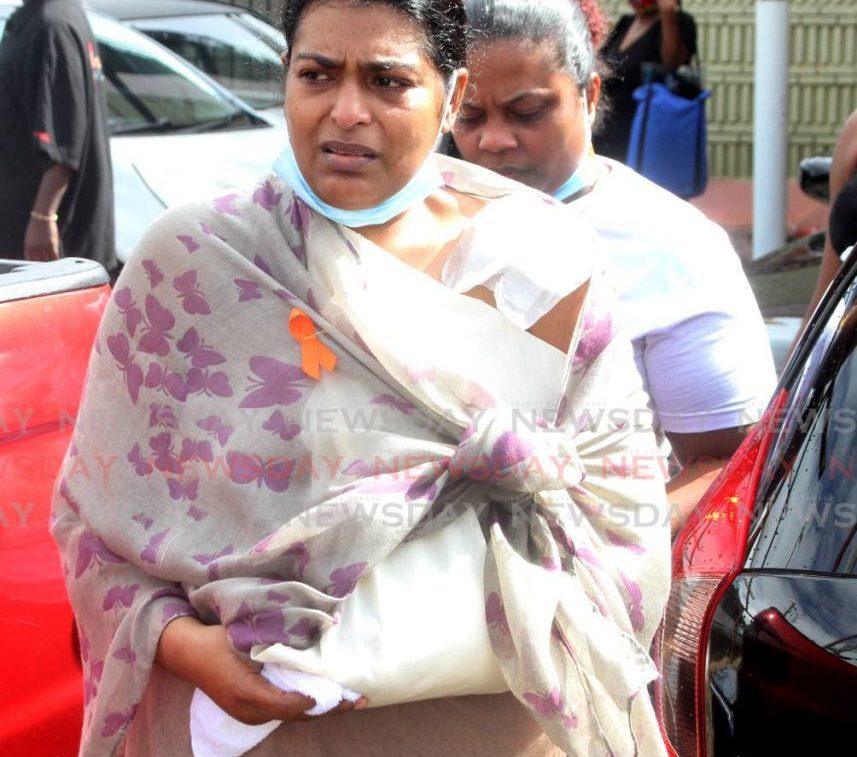 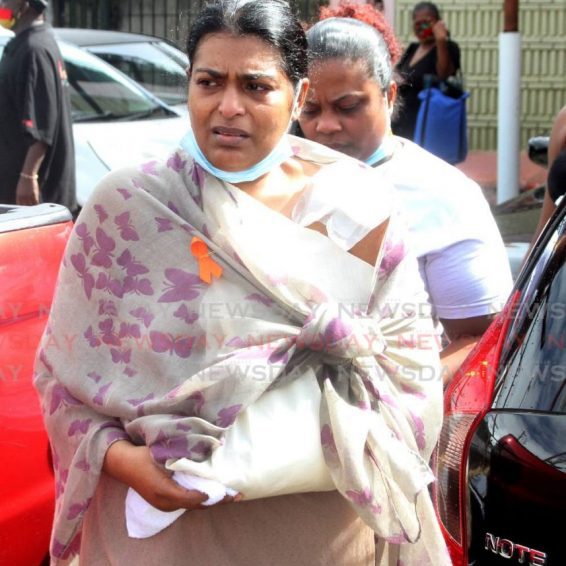 Indra Jagroop weeps at the funeral for her husband of Anterro Mc Queen at Bethany I.B.M.U Church, Wavel Street, Ste Madeleine on Friday. Mc Queen was chopped to death by one of Jagroop’s relatives. PHOTO BY ANGELO MARCELLE

Wearing a sling on her left arm, Indra Jagroop left hospital on Friday afternoon to join relatives for the funeral of her murdered husband.

The New Grant mother of two, 42, whose left hand was severed and reattached, was expected to return to the San Fernando General Hospital after the funeral. Her arm and hand were bandaged.

During the funeral at Bethany Independent Baptist Church at Wavell Street in Ste Madeleine, she sat in the front row about a foot from the coffin holding the body of Anterro Mc Queen, 52.

“He was the love of my life,” Jagroop told mourners as a relative consoled her.”Lord, give us the strength to deal with this.”

Jagroop, a Play Whe operator, sat next to her children and wept. She was also seen rubbing her eight-year-old son’s back, talking and smiling with him. Between sobs, she also sang along to the hymn, When We All Get to Heaven.

Mc Queen, also called Terro and Mamoo, and his sister-in-law Monica Jagroop, 35, were chopped and killed on the spot at Farmer Trace in New Grant on Sunday night.

In the same attack, the suspect, a close relative, injured Jagroop and her father, Manickchand Jagroop, 72. Up to Friday, he was still hospitalised.

Mc Queen, who was originally from St Clement, had seven other children from a previous relationship.

One of his daughters delivered the eulogy, describing him as a warrior, honest, stubborn, hardworking, and no-nonsense man. She considered him a simple man with a humble soul.

“On Sunday,” she recalled, “we received the news that changed our lives forever. His life was stolen from us… We love you forever and always,” she said.

Officiating pastor Carlton Hamilton told the congregation, “God is talking to the family.”

He called on people to make the right choices in life so as to end up in heaven and not hell.

Hamilton added, “God is still on the throne and knows everything. Some people say they don’t need God, but if we do not have Jesus, we have nothing.”

Mc Queen’s body was taken to the St Clement’s cemetery for burial.

Mc Queen, Jagroop and their two children lived on the ground floor of the family’s house in New Grant. Jagroop’s parents live on the top floor, and her sister, Monica, lived across the road with her two children.

Indra Jagroop leaves the funeral for her husband of Anterro Mc Queen. Photo by Angelo Marcelle

Eyewitnesses said the suspect, 33, remained silent during the murderous attack.

Police linked the attack to a land dispute, but relatives have different theories. Some believe he was drunk, and others believe his actions resulted from two rituals involving an animal sacrifice.

The police search continued on Friday for the suspect.

Funeral arrangements for Monica are yet to be finalised.