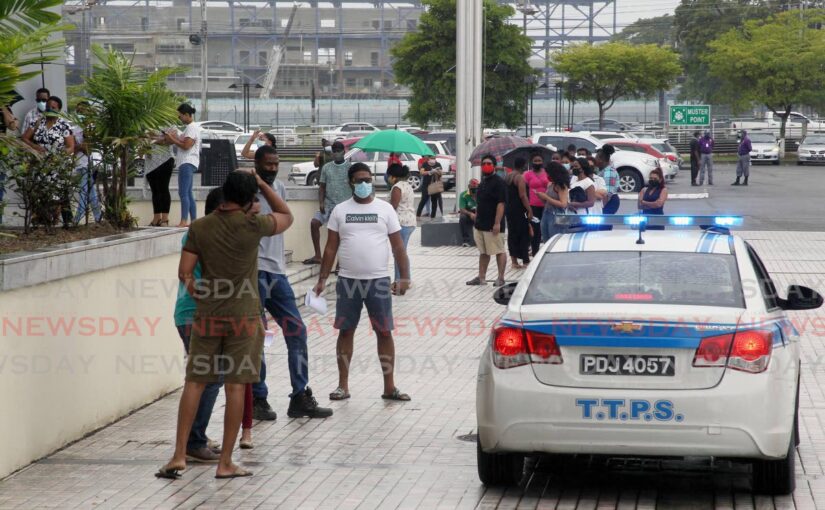 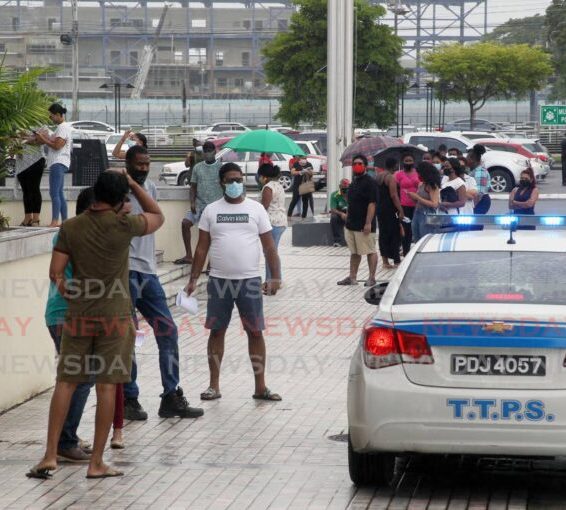 Surge in cases as state of emergency nears end

In this file photo, police officers were called out to ensure all covid 19 protocols were observed as hundreds of people turned up at SAPA, San Fernando as mass vaccinations began for reopening of the food and beverage sector. – Photo by Lincoln Holder

With the anticipated end of the state of emergency on November 29 and the current spike in covid19 cases, questions have been raised about the effectiveness of the SoE which began on May 15.

Epidemiologist Dr Avery Hinds said at a press conference that the surge in covid19 cases and deaths started in October.

“We are already at even one third of the total for October, really just in the first week of November. So we’re seeing the collecting accruing cases at a faster rate. And we also see that the percentage positivity is showing an upward trend, which is also a cause for concern.

“So we’re looking at increasing numbers of cases in the more recent weeks, and the background positivity is also increasing, indicating that we do have to be careful.”

Data from the Ministry of Health showed from November 1-12, there have been 4,190 infections and 132 deaths as a result of the virus.

The Ministry of Health covid19 updates from on Wednesday, Thursday and Friday showed 512, 509, and 535 new cases were detected, and 12, 12, and ten more deaths occurred respectively.

The strain on the parallel health care system was so much, especially on the intensive care and high dependency units, that on May 17 the US donated two field hospitals to Trinidad and Tobago, valued at US$1.5 million, which were set up at the Couva hospital and the Jean Pierre Complex.

Tends show that over the past months, the daily new covid19 cases averaged around 200. That number of new cases gradually increased over the past two weeks to linger between 300 and 400 in the last week of October and first week of November before it jumped to over 500 on Wednesday.

Some average citizens, and businessmen in particular, have doubts that the SoE and curfew worked. For example, in a previous Newsday article, MovieTowne owner Derek Chin said, “It (the SoE) really has not provided the results that they thought it would have provided, as covid is still around and covid is still spiking. So one will agree with the decision (to end the curfew), in light of the fact that the covid hasn’t really been controlled to that extent.”

However, ata press conference on November 6, Chief Medical Officer Dr Roshan Parasram said the increase in covid19 cases was multifactorial, including the spread of the delta variant and the reopening of various sectors.

“We have been seeing increased numbers of delta cases and we are now at a stage where delta is considered to be widely prevalent in the country. Delta compared to the P1 strain is two to three times more transmissible. It is possibly the delta element being the most significant.”

First, he said the delta variant was now in “full-blown” community spread. Secondly, with the rolling-back of the economy, such as reopening bars, restaurants, schools, and more people returning to the physical workplace, there was a reduction in social distancing.

“Since new cases reported today are really those who contracted covid19 up to two weeks ago, the current case number could be higher. These include those cases that have not been picked up yet and have already contracted the virus.”

Wednesday’s uptick in new infections occurred ten days after the full return to physical work of the public service and the resumption of full service at bars, restaurants, and casinos to vaccinated customers on November 1. It also took place just over two weeks after unvaccinated children in forms 4-6 returned to school.

On Wednesday, Hinds confirmed 55 covid19 cases of students and school staff up by November 5.

*Other rollbacks over the SoE include reopening hardware stores, book and art supplies stores on June 14; the construction sector and laundromats opened on July 5; the increase in the capacity of passengers in taxis and maxi taxies from 50-75 per cent in mid-July;  reopening car dealerships and the manufacturing sector on July 12; and the temporary reopening of non-emergency health services including dental, optometric, physical therapy, and occupational therapy.

*On July 12, for the first time in months, the number of daily new cases in Trinidad and Tobago dropped to below 100, with 57 cases being reported. But just three days after the borders reopened for vaccinated and unvaccinated nationals, as well as vaccinated non-nationals, on July 17, TT recorded its 1,000th death.

*On July 19, outdoor activities for up to five people resumed, as well as curbside, take-out and delivery services at restaurants and other food establishments, including street food.

*In August, NLCB booths, retail operations, and the CEPEP and URP programmes reopened. And domestic workers, personal services and real estate services were allowed to operate.

*By September 27, the country passed 50,000 covid19 infections at 50,055 and Parasram said the delta variant had been in community spread “for several weeks.”

*There were more rollbacks in October with secondary schools physically re-opening for fully vaccinated students of forms 4-6 on October 4. Safe zones which allowed fully vaccinated members of the public to access cinemas, bars, restaurants, gyms, casinos and waterparks, opened on October 11.

*On October 18, horse racing resumed for vaccinated people, the number of people allowed to attend a public gathering increased from five to ten, and the length of religious services was extended to 90 minutes.

The next day, Caribbean Airlines added six more flights to the Tobago airbridge for a total of 12. And on October 25, all forms 4-6 students were required to attend school physically regardless of their vaccination status.

*Then, on November 1, in addition to public servants going back out to physical work, restaurants, bars and casinos were allowed to serve alcohol in their establishments at 50 per cent capacity to vaccinated customers.

By the start of the SoE, TT had already received 134,200 covid19 vaccine doses from the Covax Facility as well as gifts from India and three Caribbean countries. Since then, vaccines have arrived in the country as follows:

May 20 – 16,000 doses of the AstraZeneca donated by the Government of St Vincent and the Grenadines (SVG)

Return to school a relief for principals

August 11 – The last tranche of 33,600 AstraZeneca vaccines from the Covax Facility arrived

November 6 – 151,200 doses of Janssen procured by the Government from the African Medical Supplies Platform.

Over the months there have been surges and drastic declines in vaccine uptake despite the Ministry of Health’s constantly urging people to get vaccinated with whatever vaccines were available.

Some of these surges occurred with the initial arrival of the AstraZeneca vaccines, and the Vaccinate to Operate initiative in which businesses were encouraged to get their employees vaccinated.

There were also marked increases when vaccination of children 12-18 with the Pfizer vaccine began on August 18 and its subsequent release to the general public on September 4, as well as with the announcement of safe zones by the Prime Minister on September 3.

Health authorities have been constantly calling on those who are medically able to get vaccinated to protect themselves and their families against the delta variant, as well as to help prevent the parallel health system from being overwhelmed, saying it is the only way to curb covid19.

On October 23, principal medical officer Dr Maryam Abdool-Richards warned of a trend in rising ICU cases daily after three months of relatively stable numbers. She said from October 16-23 there was an average of five-eight covid19 cases per day at the hospitals, where covid19 patients needed ICU care in the parallel health care system. About 94.2 per cent of them were unvaccinated.

Health Minister Terrence Deyalsingh also urged parents to get their children vaccinated as both vaccinated and unvaccinated students returned to school on October 25.

At the end of October, he also noted that an estimated 49,000 students between 12-18 years  were still not vaccinated.

Just two days after her warning, Abdool-Richards announced most of the ICU beds in the parallel heath care system were filled. And by October 27, 51 of the 52 covid19 ICU beds were full with seven people waiting at Accident and Emergency wards for ICU beds. At that point, 98 per cent were unvaccinated.

Then, on November 10, she said there were 427 patients in the parallel healthcare system, the highest number since June.

Despite frequent calls to get vaccinated, and the alarming numbers, including 1,500 covid19 deaths by October 2, vaccination numbers continue to slow down, with some vaccination sites being almost empty on some days.