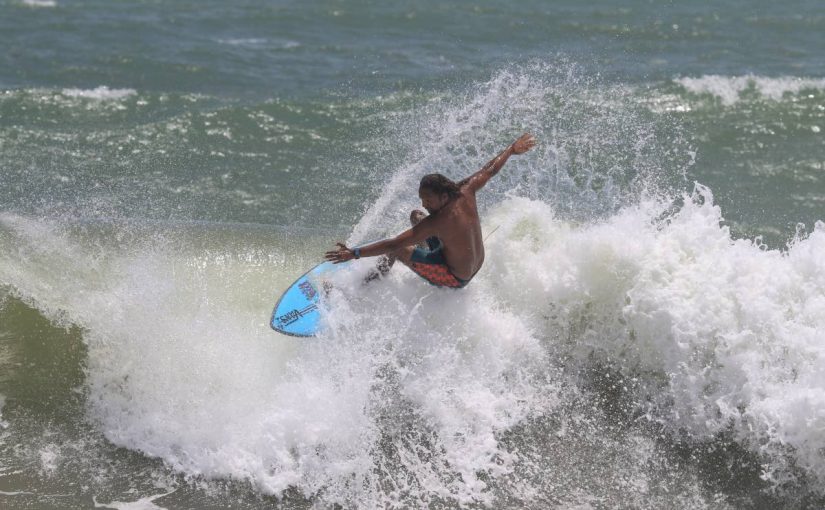 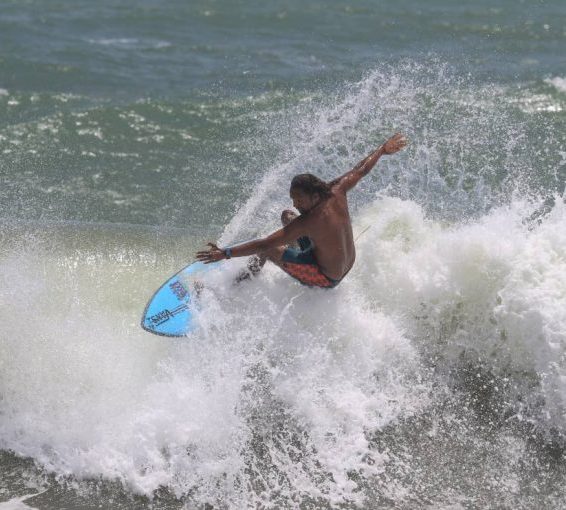 File photo:
Pro surfer Chris Dennis rides the waves at Balandra Bay, in March. Dennis was awarded the Aloha Award for his work with at risk children in TT. Photo by Nicholas Bhajan

THE CONTINUED ban on all beach activities, particularly individual sports like surfing, is failing athletes who have been forced to miss major regional competitions, owing to a lack of training, says the Surfing Association of Trinidad and Tobago (SATT).

The association’s executive recently wrote to the Ministry of Health yet again outlining its disapproval of the restrictions, which have affected the surfers for over a year.

SATT president Ronald Riley wrote, “Following our proposal at the end of August 2021, where we advocated for our community at large and all open water athletes/ocean enthusiasts, we have focused our efforts on seeking an exemption for our national ranking surf athletes.

It first wrote to the Ministry of Health and the Chief Medical Officer on October 1, requesting open-water training access for its national athletes.

Newsday published excerpts of the association’s proposal and its subsequent press release, which it highlighted the impact on local competitive surfers in terms of international events. SATT said its athletes were forced to miss two major competitions this year, namely the ISA World Games in May and June and the Pan Am Junior Games, which take place this month in Colombia.

“Our sport is now an Olympic sport seeing great success in Tokyo, and looking forward (to the) impact and viability of surfing as an Olympic sport is clear, considering that Paris 2024 is looking at French Polynesia to host (if not the French Caribbean).

“We’ve just had front-row seats to the growth of French surf culture as our vice-president and technical director Jason Apparicio has been coaching French Caribbean nationals to great success this past month…and not only in France but in the Azores (islands) in Portugal as well.”

At this point, the association’s executive said, the ban was “an embarrassment.”

Riley argued that there is no ban on surfing elsewhere in the region nor anywhere else in the world. He noted that in Barbados, for example, though competitions have been postponed, surfers continue to have ocean access.

“As a sport, we have had great success in managing covid protocols and understanding how seriously they are to be taken…the ISA World games held in ‘Surf City’ El Salvador in May and June of this year just prior to the Tokyo Olympics, where remaining competing surfers for the Tokyo Olympics were selected, is another example.”

In their correspondence to the Ministry of Health and the Chief Medical Officer, he wrote, “We spoke to land training and our season. We spoke to the loss of this eventful hurricane season explaining our season starts from September/October and runs through Easter.”

The ocean access requested for national-ranking surf athletes, he argued, was in line with the national sporting concessions made for other disciplines in the country.

In its initial proposal, the SATT suggested there should be only five surfers at a time in the water, with an increase to ten as of October 16, “with two different time slots to ensure organisation.”

The personnel involved, Riley said, would have included a coach, a videographer for technical analysis and health and safety guardians (one or two dependent on surf conditions) on the day.

“We supplied a list of proposed beaches, necessary due to the sport being restricted to conditions such as swells and wind strength.

“We continued to reiterate our strong focus on following all MoH covid protocols again following the strict example of international governing bodies of the sport: the international surfing association as well as the World Surf League.”

The SATT also proposed to meet with local police and community leaders “to establish communication regarding training dates and times, as well as a list of exempted athletes so that presence was understood.”

The Ministry of Health responded on October 5, asking the association to be patient.

“(We were) made to understand that an announcement was forthcoming with regard to ocean access,” Riley said.

“We did push for an exemption letter to protect us…again we were made to understand that it was in our best interest to have some patience and an announcement would be forthcoming. This was communicated to our community.

“We spoke to the fact that the Pan Am junior games were coming up … and the numerous Florida competitions some of our athletes could have attended with the proper fund-raising, support and training in place.”

He said the sport is in line with science, and with the World Health Organization and the Centers for Disease Prevention and Control’s US protocols.

Riley argued that surfing is a non-contact, outdoor physical activity, with athletes distanced by the nature of the sport.

There has been subsequent correspondence between the SATT and the relevant government entities, but no redress has yet been offered.

Riley, in his latest public comments, wrote, “Are we the only water sports not practising/training? As far as we know, the short answer is yes.

“How are we being disadvantaged when compared to other sports? We have absolutely no exemption and no real simulation available.

“Not all of our athletes have access to pools, for example. There’s only so much that land training can achieve as our sport is run by ‘Mother Nature.'”

Saying a tennis player’s fitness doesn’t determine their success with a racquet, he argued that surfers’ best form of training was in the “field,” or in this case, the sea.

“As islanders this has been difficult; as surfers this has felt crippling; and as a sporting association we recognise how detrimental this could be to any competitive, socio-economic and Olympic possibilities we have here and now moving forward,” Riley said, adding, “Globally, surfing is responsible for exponential growth in coastal economies” and various forms of tourism.