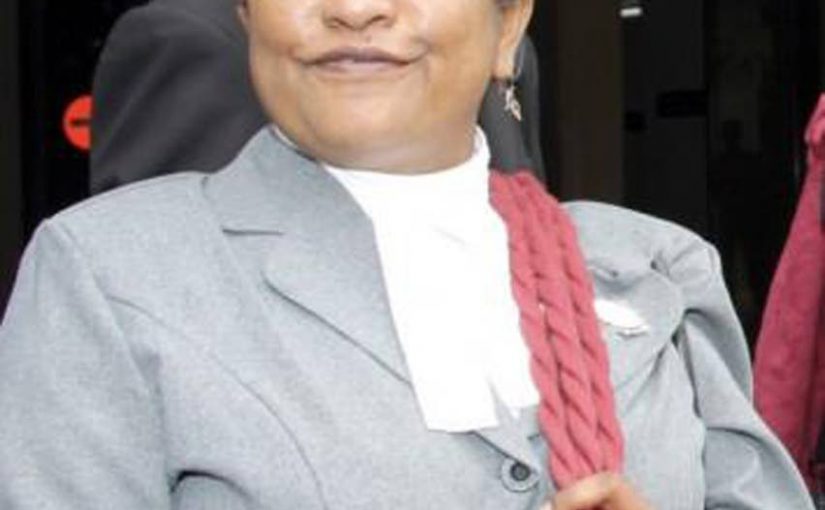 TWO of the ten men charged with the murder of well-known attorney Dana Seetahal are asking for the magistrate presiding over proceedings to step down from the case. The application for Senior Magistrate Indrani Cedeno to recuse herself on the ground of apparent bias was made by attorney Criston J Williams who is representing alleged gang leader Rajaee Ali and Earl Richards.

It is being claimed that Cedeno failed to immediately disclose to the defence that had she had communicated with the prosecution on two occasions in November and May, on alleged threats made. Williams said based on what has taken place, it is clear this magistrate must step down.

According to the application, the threats were received by the prosecution who relayed it to her via WhatsApp messages. Acting on the information received, the magistrate was said to have increased her security.

Two in-chamber hearings were held in June and it was only then that the defence became aware of the communication between the prosecution and the magistrate.

In his application, Williams alleged the magistrate failed on her own volition to tell the defence of the communication between herself and the prosecution or disclose the WhatsApp messages. He said the defence is entitled to know why. He also said the prosecution failed to immediately disclose the communication and only did so seven months after it happened.

He also submitted that in light of the history of the case, a fair minded and informed observer might think that the magistrate was biased and favoured the prosecution unfairly.

Williams said it was the purpose of the court to maintain the highest standard of judicial conduct so the decision it arrived at was not tantamount to an affront on the fair minded and reasonable observer’s opinion of integrity of the judicial process.

He also questioned the conduct of the prosecution, saying it was “fundamentally flawed” and “unbecoming.” This is the second time a magistrate presiding over the inquiry has been asked to step down.

Former chief magistrate Marcia Ayers-Caesar in January 2016, also stepped down after a similar application was made by the defence and supported by the prosecution. She agreed and was replaced by Cedeno.

Ayers-Caesar’s decision to step down came after she was informed by the then Criminal Gang and Intelligence Unit (CGIU), which was instrumental in the investigation in Seetahal’s murder, that there was a threat against her life. Security was also increased for Ayers-Caesar and officers of the CGIU were briefly assigned to her security detail.

In December, the DPP discontinued the murder charge against an 11th man, Stephan Cummings, who was instead charged with conspiring to murder Seetahal. No reason was given for this decision. Cummings was granted $200,000 bail.

Seetahal was shot dead behind the wheel of her SUV while driving along Hamilton Holder Street, Woodbrook, on May 4, 2014, as she was returning home from an Ariapita Avenue casino. A year later, Ali and the others were charged with her murder and gang-related charges.

Three others – David Ector, Deon Peters and Ali’s wife Stacy Griffith – were charged as gang members, but not with Seetahal’s murder. In May 2016, the gang charges were dismissed by Cedeno against all the accused except Ali and Griffith, because the charges were laid indictably instead of summarily as prescribed by the legislation.

Ector and Peters were freed as they had not been charged with murder.

Since Ali was also charged with being a gang member and his wife with benefiting from the gang’s activity, they are still before the court on those charges.

An appeal has been filed challenging the magistrate’s decision to dismiss the gang charges and is expected to come up for hearing next week.

The post STEP DOWN appeared first on Trinidad and Tobago Newsday.

Sat Jul 14 , 2018
Public Administration Minister Marlene Mc Donald, who was again hospitalised on Saturday, is reportedly resting at home after being discharged from the St Clair Medical Centre, on Tuesday. Mc Donald was quoted yesterday in a newspaper article as confirming she had pneumonia and that bacteria in her system had begun […]