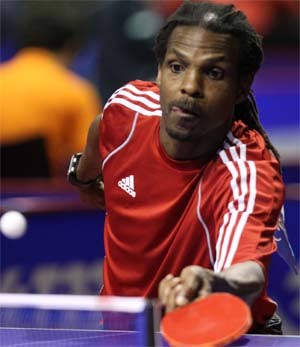 DEXTER ST LOUIS, the veteran France-based TT table-tennis player, has snubbed an offer from the TT Table Tennis Association (TTTTA) to participate at the Central American and Caribbean (CAC) Games, which will begin tomorrow in Barranquilla, Colombia.

The 50-year-old St Louis challenged the TTTTA’s original decision to name a quartet comprising Curtis Humphreys (player/coach), Aaron Wilson, Yuvraaj Dookram and Arun Roopnarine for the Games. As a result of the wrangling, no men’s team was ratified for the CAC Games.

According to St Louis, the team chosen by the TTTTA could not be accepted or endorsed by the TT Olympic Committee (TTOC) on the basis that it was not in compliance with its (TTOC) arbitral tribunal. A TTTTA official, who chose to remain anonymous, said yesterday that Humphreys was willing to give up his spot to St Louis, but the dreadlocked left-hander declined the offer.

“There were discussions between Ian (Joseph, president of the TTTTA) and Dexter’s (legal) team on Thursday,” the TTTTA official said. “On Saturday, we got an e-mail from (St Louis’) team basically saying that he does not want to be a replacement player.”

St Louis’ attorney Matthew Gayle, in a telephone interview last evening, said, “What occurred in the first instance that it was found to be, by the TTOC’s arbitral panel (Tyrone Marcus, Stefan Fabien and Christophe Brathwaite) was effectively a ‘cash for place’ selection process. The Association disregarded the criteria and purported to hold a sham selection meeting, after the deadline set by the tribunal (of July 9).”

Gayle pointed out that St Louis was hoping to be legitimately selected on the TT team.

He said, “Backroom deals or horse-trading for places at international games is just as reprehensible as cash for places.

We didn’t decline any replacement offer, we simply said we were not willing to get involved in any backroom deal.”

St Louis and his step-daughter Rheann Chung had took the TTTTA to court over its selection criteria for the Commonwealth Games in Australia earlier this year.

And Gayle noted that St Louis may indeed seek legal redress from the TTTTA over this current issue.

“It seems that St Louis has been denied a fair chance to be selected to these Games,” Gayle said.

“We are considering all options open to us to take steps, to see what possible redress there may be for the Association’s denial of St Louis’ rights to be fairly considered.”

With regards to St Louis’ place on future national teams, the TTTTA official noted, “It’s based on the selection committee and based on the tournament.

(There are) Caribbean Games in September, we had trials last week for that and he wasn’t present.

“We have always had him in contention for the national team. We’ll have to wait and see for the next tournament,” the TTTTA official ended.

Chung will lead the TT women’s team campaign in Colombia, along with Brittany Joseph, Catherine Spicer and Linda Partap-Boodhan. TTTTA president Joseph will serve as manager and ex-national player and TTTTA general secretary Aleena Edwards is the team’s coach.

Kirby: We have to bring our A-game

Tue Jul 17 , 2018
CAPTAIN of defending champions Udecott North Starblazers Lee-Ann Kirby believes the second edition of the Courts T20 Grand Slam is up for grabs as all teams have quality players. The Starblazers will play against Trident Sports Phoenix at the National Cricket Centre in Balmain, Couva, from 7 pm tonight when […]