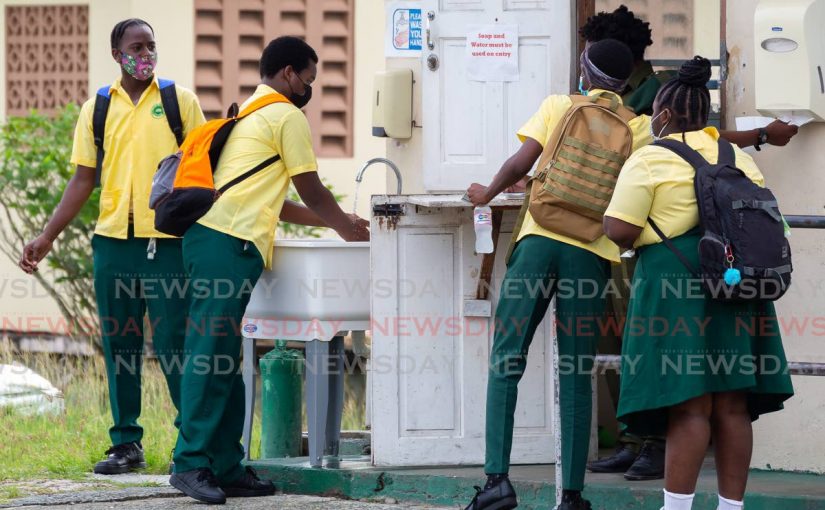 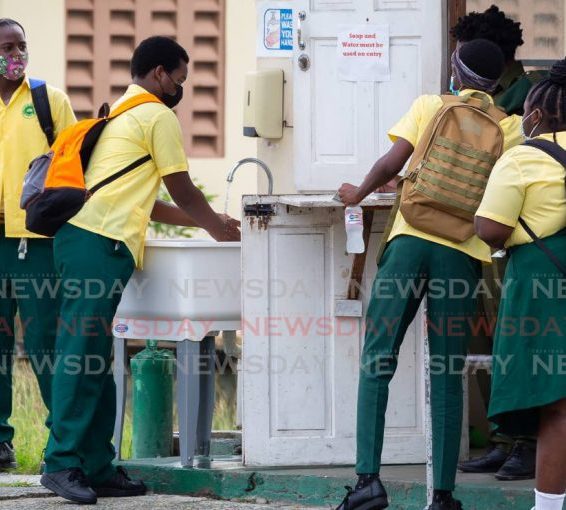 Signal Hill Secondary students wash their hands as they enter the school compound on Monday. Forms four to six students, vaxxinated or not, were allowed to return to physical classes on Monday for the first time since March 2020. – David Reid

Tobago’s secondary schools saw a spike in the student turnout on Monday as unvaccinated forms 4-6 pupils were allowed to join vaccinated students, weeks after the latter’s return to physical classes. Face-to-face classes resumed on October 4.

On the first day, the Division of Education, Innovation and Energy reported extremely low attendance. Of the 1,149 vaccinated student population, 209 were present for class on the first day and 618 teachers reported to work.

By the end of the first week, TT Unified Teachers Association (TTUTA) Tobago officer Bradon Roberts said teachers were suffering burnout from trying to balance virtual lessons and face-to-face classes.On Monday, Newsday was told that by 8 am every school had over 150 students present.

At the Signal Hill Secondary School, students weren’t too concerned about their peers’ vaccination status. Most were just happy to be back out.

Nichola Paponette, a fifth-form student, said, “The last time I remember being in school was quite in March, so I’m just happy to be out of the house. I don’t like being home, so I feel much better. “I’m vaccinated, I didn’t want to take the vaccine, but I just prefer face-to-face classes.”

Jeremiah Olton of form four said it has been almost two years he has been away from school. He is glad to be back.

“I could get to see everybody I haven’t seen in a while…I’m not worried about mingling with unvaccinated or unvaccinated students. Once I have my mask and I follow the covid19 guidelines I know I’ll be good.”

This wasn’t the case for Shaneka White, who didn’t seem too enthusiastic about returning to school.

“I really didn’t want to come back out. I prefer to stay home. I was able to narrow my focus and do more work.”

Asked her thoughts on having unvaccinated students in school, she said, “I find that is unfair, because covid19 is still here. I think everyone should be vaccinated…I don’t feel really safe. I plan to (get vaccinated) myself, and continue to sanitise and wear my mask.”

There was a long line of students waiting to be screened at the entrance of Scarborough Secondary School.

One student there told Newsday she had mixed emotions.“I don’t know what to think, because I want to get back out and see my friends, I’m tired of being home.

“But I’m worried about the possibility of contracting the virus.

“We haven’t had any complaints from teachers on the scheduling,” he said, “only complaints about minor issues with labs, which the division gave the assurance to have addressed as soon as possible…

“I know some parents are trying to get school items together, which may be the keep back for some students on the first day.”He is expected to visit all schools throughout the day.

Secretary for the division Marslyn Melville-Jack could not be reached for comment over the past three weeks. But Newsday was told she visited a few schools between 7 and 8.30 am.