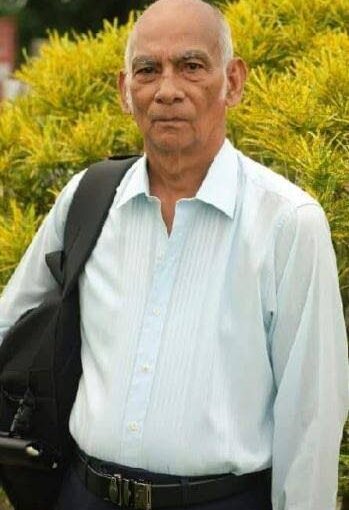 The 78-year-old father of three and grandfather of one died peacefully on Christmas Day at his home at Retrench Village in San Fernando from heart failure.

“He took his last breath in my arms at 7.05 pm. My mom was also in the room when he passed away,” his daughter Cherry-Ann told Newsday.

She recalled that he started his career at the Guardian newspaper at 19 and worked there for ten-12 years. He later became a freelancer and worked for several organisations, including Petrotrin and Southern Sales Ltd.

Despite his health challenges, Cherry-Ann said the death was unexpected.

“Up to last week Wednesday, he ate bread pudding, soup and other things. Earlier on Christmas Day, when I checked his oxygen levels, the readings were fine. I would always check to see what he was doing. He kept saying he just wanted to sleep.

“Dad always showered us (relatives) with presents. He always made sure we were well-taken care of, and I have no regrets about taking care of him during his illness. I know he went happy.”

Parris said, “Condolences to the family of famed San Fernando photographer former Guardian photo/journalist and person responsible for San Fernando City photo archives Mr Michael Ramoutar. Mike was a friend to daddy and I, and he will be missed. He was a true icon in the city of San Fernando.”

Pascal said, “He was at every event in San Fernando, and I could always count on him for my photos after every performance. He served the cultural landscape in south Trinidad well, so it’s time to take that well-deserved rest, sir.”

The funeral was held on Thursday at Boodoo’s Funeral home after which Ramoutar was cremated at the Shore of Peace cremation site (Mosquito Creek) in La Romaine.