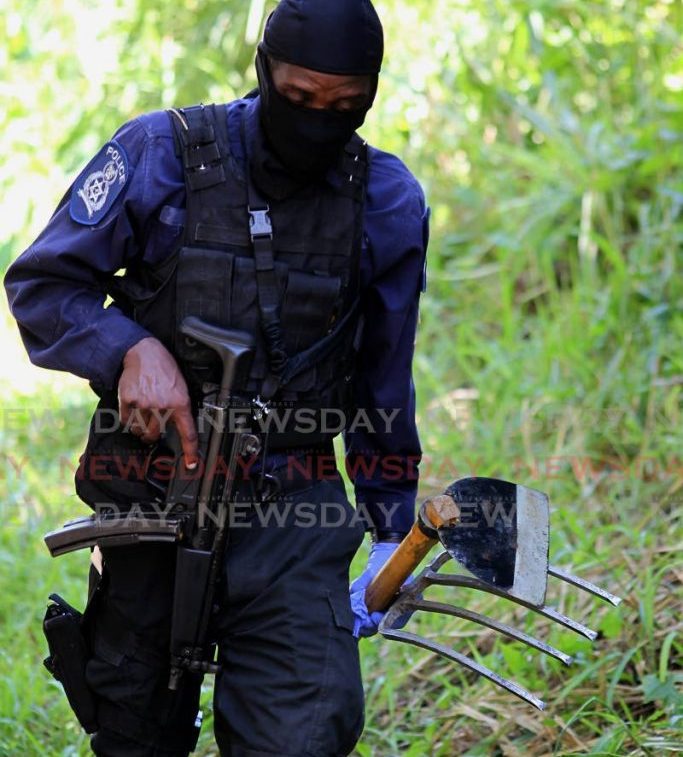 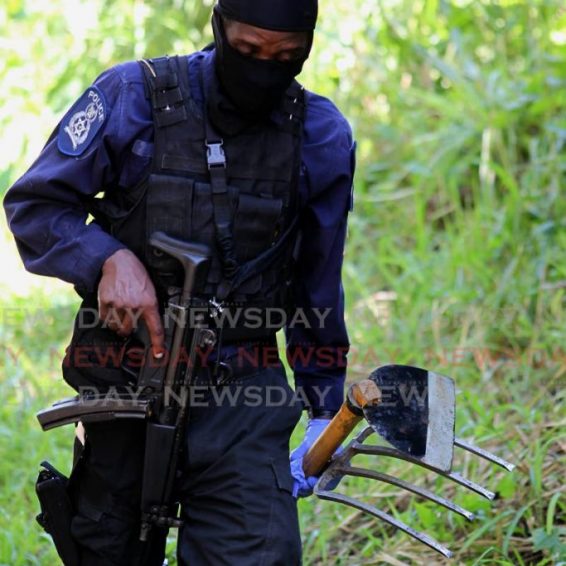 OFF TO FORENSICS: Police place the body of Kezia Guerra into a van to be taken to the Forensic Science Centre. Photo by Roger Jacob

THE search for 27-year-old casino worker Kezia Jeneka Venicia Guerra ended in sorrow early on the Divali public holiday with police digging up her body from a four-foot-deep grave in the forest, some 300 feet away from Santa Barbara Road in Maracas, St Joseph.

Police said they discovered the body at about 8.20 am. The exercise was led by ACP Samaroo and included officers from the Maracas St Joseph Police Station, the Northern Division Task Force (East) and the Cyber Crimes Unit, with assistance from a hiking group.

Police sources said Guerra’s grave was found near a river. Near the grave, there was a cut bamboo stalk jutting out of the ground with a piece of cloth tied to the top. However, police said they do not believe the makeshift flag had any connection to the grave.

As Guerra’s relatives and friends plus undertakers and journalists waited along Santa Barbara Road, the stench of decomposition filled the air, grim proof that the search was over and what was once a missing persons case is now a murder investigation.

Relatives and friends of murder victim Kezia Guerra wait for her body to be removed from the forest. Photo by Roger Jacob

Officers said they could not determine the cause of death since Guerra’s body was in an advanced stage of decomposition, which also led them to believe she was killed and buried not long after she left home on Saturday.

Relatives at the scene  identified the body by the clothing, which they said Guerra wore when she was last seen alive. She was also identified by a tattoo that ran across her right thumb down to her wrist.

The discovery of Guerra’s body was the conclusion to a bizarre series of events which included the suicide of a man identified as Akash Ramesar and a Venezuelan national being held and admitting he was paid to dig a hole in the forest.

Guerra’s boyfriend of six months, Dillon Huggins, told Newsday she left their Moraldo Trace, Sam Boucaud, Santa Cruz home at about 11 am on Saturday to meet a teenage relative of Ramesar at Curepe junction. She said they were going to the mall.

Huggins said he went into the forest to hunt on Saturday and when he returned home on Sunday, Guerra was not there.

“She is a girl who don’t sleep out,” Huggins said. “At about 11.38 pm on Sunday, I messaged her phone but there was no response. I messaged a close friend and asked if she was there but he said she wasn’t. I told him she was missing. I looked in the dirty clothes basket and realised one of her outfits was not there.”

Guerra said he then called Guerra’s mother and made a missing persons report to police.

Police said Ramesar, 36, and two Venezuelan men were detained on Saturday night after they were found on Acono Road in Maracas, St Joseph. Ramesar, police said, claimed his car had shut down. The three were released after police checks for a criminal record turned up empty. Hours later, Ramesar was dead.

Police said that at about 5.30 pm on Sunday, Ramesar’s body was found in his Curepe home by a relative. Police believe he died by suicide.

Police said they connected Ramesar to Guerra through information stored on his phone and accessed by detectives from the Cyber Crimes Unit.

The search for Guerra began on Monday and two days later, her bloodstained handbag was found near a river in the forest in Maracas, St Joseph. Her identification documents and some money were found in the bag but her iPhone 8 phone was missing.

Police later detained one of the Venezuelans who was found on Saturday with Ramesar. Sources said the man admitted to being paid to go into the forest and dig a hole.

FOREST CRIME SCENE: Crime scene police measure the banks of a river in the forest in Maracas, St Joseph near where the missing Kezia Guerra’s body was found on Thursday in a four-foot-deep grave. Photo by Roger Jacob

Sources said he collected his money, did what he was hired to do and asked no questions. The man later took police to the place where Guerra’s body was found. Police said it was 12 miles from where Guerra’s handbag was found. The Venezuelan remains in police custody.

Huggins described Guerra as a loving and cheerful person.

“She always had a smile on her face,” he said. “Although she didn’t have any children, she loved kids.” Huggins later thanked police and others who volunteered to help find the body and in so doing, brought some closure to him and Guerra’s family.

Roseanne Mejias, who owns the land where Guerra’s body was found, described the area as a quiet and peaceful place and she was shocked when she got a call and was told a woman’s body was found.

“I am worried now, because there is no telling if criminals will now view this area as a place to bury their victims. Because I think as soon as one body is found others will come here to bury bodies. I have kids and grandkids…so it is a worrying feeling,” she said.

However, Mejias said the area is a five-minute drive from the police station and added that police regularly patrol the area, She complained of poor street lighting which could be an incentive for criminals to move in.

A policeman walks with a hoe and pitchfork which were used in the recovery of Kezia Guerra’s body from a grave in the forest. Photo by Roger Jacob

In expressing his condolences to the Guerra family, Deputy Commissioner of Police McDonald Jacob told Newsday that about 33 per cent of all murders in Trinidad and Tobago are domestic in nature,  involving disputes over either relationships or land. He said greater emphasis needs to be placed on conflict resolution.

“Yes, we will deal with gangs, but when it comes to issues like this, we need greater mediation and conflict resolution,” he said.

He said relationship issues could very well have been at the centre of the death of Guerra and may also have led to the suicide of a 21-year-old Malabar woman on Tuesday. Pressed for further details,  Jacob said he would say nothing further since several investigations are ongoing.

The murder toll now stands at 349 for the year.

Guerra’s body was later removed to the Forensic Sciences Centre in St James, where an autopsy will be done to ascertain the cause of death.