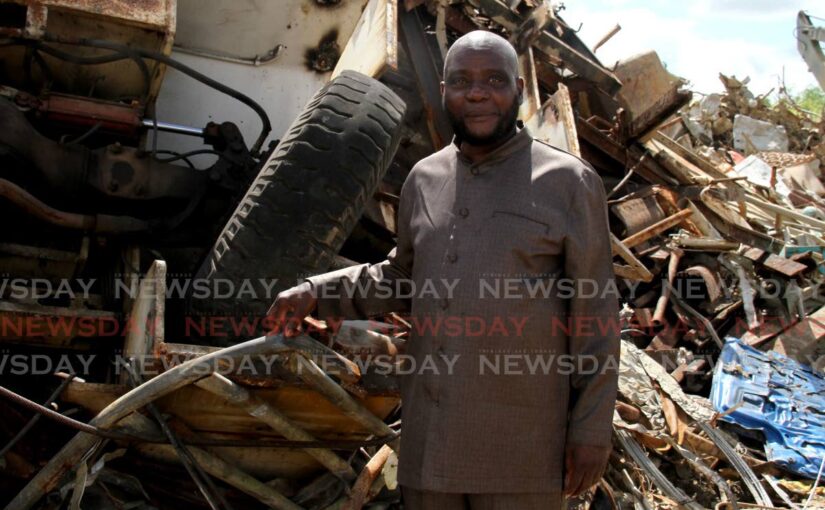 President of the Scrap Iron Dealers Association (TTSIDA) Allan Ferguson has vowed to keep fighting on behalf of his membership to dispose of scrap iron from Heritage Petroleum Company Ltd.

He once again called on all citizens, including the Prime Minister, to rescue the industry.

“Mr Prime Minister, you are a man that I watch, and I don’t lie: I admire you as a prime minister. Please, I know you are busy, but please hear our cries. I am not fighting for me, I am fighting for my organisation,” Ferguson said.

He spoke at a press conference at Signature Hall in Chaguanas on Wednesday.

Ferguson accused the state-owned Heritage of treating association members like bastards. The association has been unsuccessful in striking a deal to buy the scrap metal from the company’s facilities in light of the closure of Petrotrin’s refinery in 2018.

He said what happened to TTSIDA is worse than the Section 34 fiasco.

Ferguson said, “Out of the materials sold previously, more than 75 per cent came from Petrotrin. My organisation is hurting.”

Ferguson had called for an urgent meeting to discuss what TTSIDA sees as a “fundamental flaw” in the bidding process for the sale of scrap-iron materials, making allegations of corruption.

At the meeting, TTSIDA found the tender had not been cancelled. Ferguson alleged that the Heritage Petroleum team did not confirm which organisation, if any, won the tender.

Rampersad read another letter on November 18, addressed to Ferguson, in which the company responded to the November 5 letter. Quamina is alleged to have said he took “careful notes” of the association’s concerns.

The invitation to bid for the disposal of the scrap materials was issued in September 2020 by advertisements in the daily newspapers and the company’s website.

Rampersad said the company claimed to have received 22 responses, of which seven were rejected as being non-compliant with Heritage’s bid process.

TTSIDA was told no bid was received from the association. What was received was a Google link submitted by Ferguson. The link did not follow the bid instructions, and the company was unable to access it for evaluation.

Rampersad, like Ferguson, emphasised that the association had followed the bidding process.

Heritage communications manager Arlene Gorin-George said the company has no new comment on the issue and its position remained the same as what it had said in a previous statement.

Last month, the company said in that statement that as a wholly state-owned enterprise it was is guided by the principles of the State Enterprise Performance Monitoring Manual (SEPMM) and Heritage’s associated processes, procedures, and guidelines.

” As such, Heritage’s disposal and approval process are in compliance with the SEPMM, which includes a public tender process that was adopted for the disposal of obsolete assets. The tender process for disposal of the scrap iron followed this procedure,” the statement said.

It also said Heritage Petroleum remained committed to a fair and transparent process.