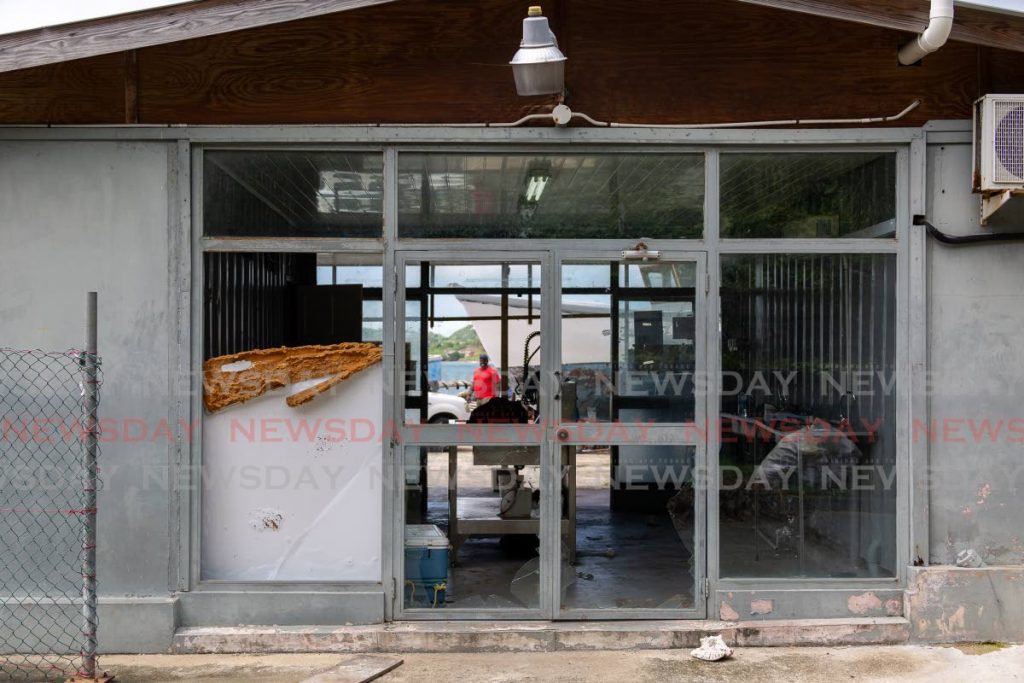 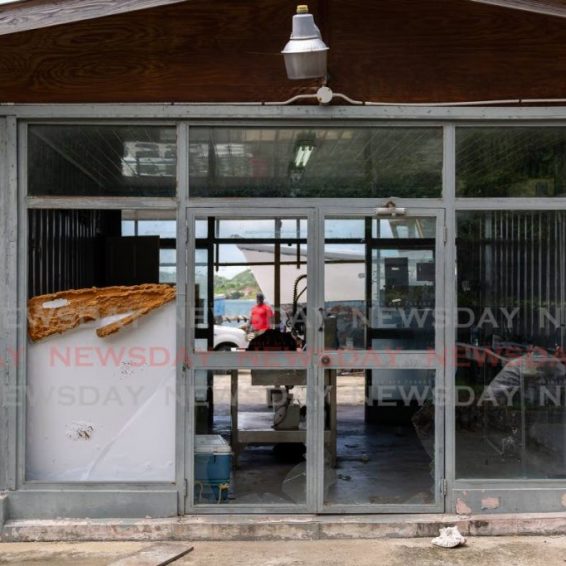 Newsday reporter Elizabeth Gonzales, back right, talks to Scarborough fishermen at their temporary facility on Thursday. Photo by David Reid

UPSET Scarborough fishermen say they will not longer bite on political bait ahead of the December 6 Tobago House of Assembly (THA) election.It’s been over 15 years they have been clamouring for a suitable, secure and sanitary space for preparing fish. Instead, their old structure was demolished in 2015 and a temporary facility was built from old shipping containers.

The fishermen say they are tired of broken promises and will not listen to another word from Tobago politicians.

“We have heard it all, until we don’t want it to hear anything any more,” one fisherman told Newsday on Thursday as he struggled to keep flies away from pieces of fish placed on an old wooden table behind two deteriorating shipping containers, in Scarborough.

Rust build up on unused sinks inside the Scarborough fishing depot. Photo by David Reid

He said, “The (former) opposition pass here, showing us plans; other ‘politicals’ including the Chief Secretary come here to show up themselves. We crying for this facility for too long. They will come, make promise and still we won’t see anything. Seeing that is the case, we don’t want to hear from any of them.”

Another fisherman said, “Won’t make any sense asking them for anything in this election season. They will just fool us and leave.”

Long before the construction of the temporary facility, the fishermen said they struggled with maintenance issues.

In 2014 the then Division of Agriculture, Marine Affairs, Marketing and the Environment distanced itself from the maintenance of the fishing depot.

Inside the walk-in storage room located on the compound of the Scarborough fishing depot. The freezer stopped working months ago and is now being used as a storage facility. Photo by David Reid

Two years after the temporary facility was established, fishermen noted problems started to arise: dilapidated doors; a washroom facility broken into and being used by a homeless man; the security booth used as a storage area; malfunctioning air condition units; a rotten wooden table for handling fish; rust around the containers; and an unbearable stench around the facility.

Currently, the glass doors to the temporary structure are shattered, sinks are covered in rust an unusable, washrooms are in a deplorable condition and the walk-in freezer is now a regular storage room.

The fishermen said they received a notice months ago from the fisheries division advising them of plans to relocate to a 20×20 tent on the compound while upgrade works are started. No work has begun.

Fisheries director Garth Ottley on Friday confirmed the plan to temporarily relocate the fishermen to a tent.

A flash back to Scarborough temporary fishing depot in November 2017. The first time the building was were vandalised. Photo by Elizabeth Gonzales

He said, “We put it up but a leg of the tent was damaged during heavy winds and rains. Also, we have a small challenge with the contractor so refurbish works on the facility had to be postponed. We decided we will put up the tent up when its time for works to begin, which will be very soon”

He acknowledged some resistance from some fishermen but said after consultation both parties are now on the same page.

The fishermen disagreed, but said they don’t see the point in protesting.

President of the Scarborough Fisherfolk Association Kerry Makoul told Newsday they have passed the stage of listening to plans and proposals – they want to see action.

“This fishing depot is supposed to be the best one in Tobago, because it’s in the capital.

“We expect pretty talk and no action. They’re just focused on fishermen’s votes and once they get our votes they don’t care about us.

“They always showing us their billion-dollar plans that they know they can’t do. We are demanding to see something viable and realistic.”