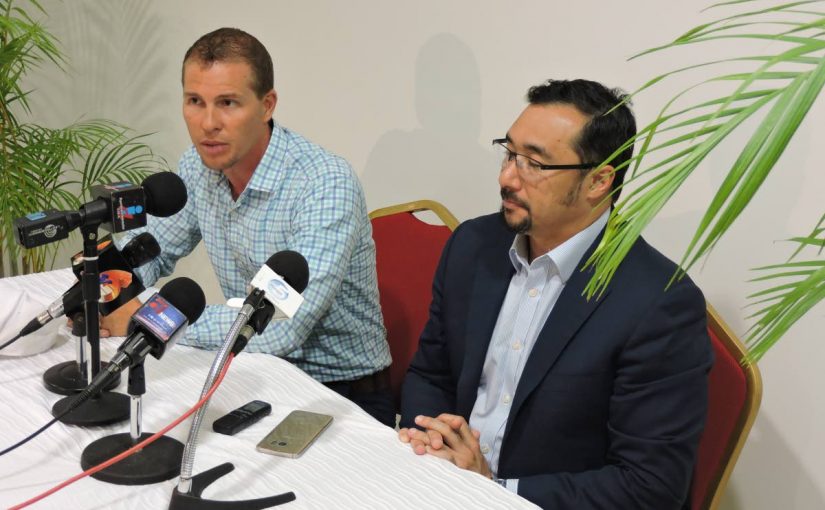 Government is hoping to sign commercial agreements with Sandals Resort International (SRI) for a hotel in Tobago before the end of 2018, Communications, Minister Stuart Young said on Tuesday.

Adam Stewart, Deputy Chairman of Sandals group, asked about concessions being granted to SRI, said, “Concessions are a conversation that we’ve not had.

“It is a conversation that the Government of Trinidad and Tobago and Sandals have not had because we don’t yet know the commercial terms to the relationship. We have talked about local linkages and how we are going to support the agricultural sector in Tobago. Talking about further elements of linkages like tours and taxi transfers; these are the parts that drive the tourism product.”

Stewart told reporters the idea of a Sandals and Beaches resort in Tobago was totally conceptual at this point in time.

“It is until we do the environmentalist work, we won’t exactly know what buildings can go where and how many rooms in total but in just as we’ve concepted, the hotel will some something in the order of 800 keys in excess of 1,000 rooms, in excess of 1,800 to 2,000 permanent employees and the economic impact probably somewhere around US $80 million a year that goes in taxes,” he said.

Young reiterated that Government would build and own the hotel, and it would be managed and run by Sandals. He said discussions were ongoing on the structure of equity, that “we are looking at other equity partners and investors.”

“By the end of the year, and hopefully it would be a few months before the end of the year, we hope to have concluded the commercial agreements between ourselves and Sandals and move that to a signing ceremony and an execution. Between now and then, there are a couple other key and critical points that, as we are sure when they are going to happen, we would announce,” he said.

He also said that “we are going out with RFPs to now contract an environmental firm to work along with us and part of the process for the EMA would be the public consultation.

He said at the meeting between Government and SRI officials, timelines were discussed and “who has to do what going forward and who would be in charge of the various aspects of the project.

“So, for us that is a very positive step in the right direction. We also spoke about how we would be approaching the EMA, the Town and Country and all the other statutory agencies that we have to interact with. We have completed the surveys and the topographical surveys as well, so all of that was fed into the machinery,” he said.

As for the tour of the Bucco/Golden Grove area, Young said this was “to get a better understanding of what we’re facing with the land.”

Stewart said that the purpose of the tour was to look at places along the site and get a better understanding of the property. He described the tour as presenting a fundamental shift in the discussions.

“We came equipped with quite a lot of thoughts that until you get onto the land, you cannot really actualise and see to it what exactly is possible. We leave here more excited than we arrived at the prospects of what can be done. We had the environmentalists with us, which is probably the most critical component of the conversation at this point to understand what are the considerations and the conversations that need to be had around the development,” he said.

Asked about the involvement of Tobagonians in discussions to build the resort, Stewart said the environment work would drive what the development can become.

“That report becomes the baseline of what Sandals will present and say this is what we think we should do. At that point, probably somewhere within a 60-day period from today, give or take a week or two… at that point is when we would have a town hall where all stakeholders within the linkages sector will be,” Stewart said.

The post Sandals: No talks on concessions yet with Govt appeared first on Trinidad and Tobago Newsday.

Thu Jul 19 , 2018
THE EDITOR: Since the release of the SEA results, I have read many newspaper contributors unfairly criticising teachers and the Ministry of Education for not doing enough to help the estimated 2,000 plus students who fall below the 30 per cent mark. However, it was refreshing to read the views […]