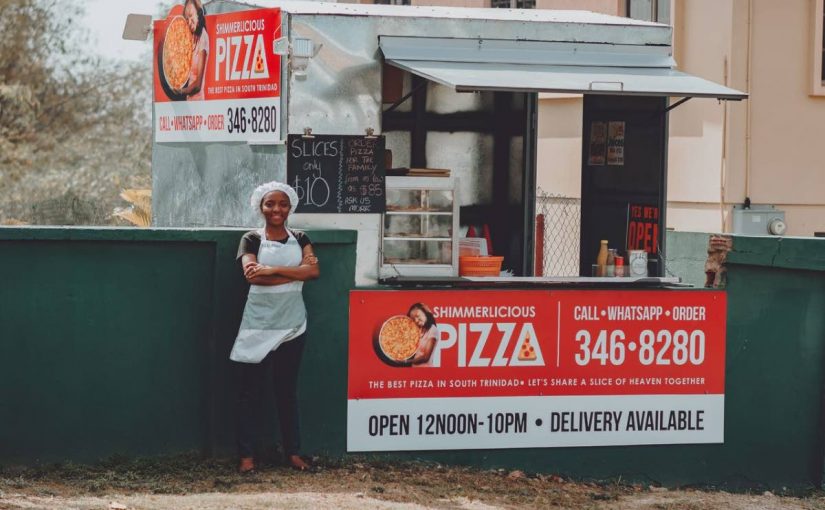 While Anthony recalls putting the new recipe on her menu since last year, her speciality saltfish pizza only recently began making waves.

Husband and wife Facebook bloggers and foodies, Rendelina, (Rendel and Melina) recorded a video review on Shimmerlicious and uploaded it to social media.

To date, the video has earned some 19,000-plus views and also went viral on WhatsApp.

On the blog, the couple stated, “We have been hearing about a pizza place in La Brea for a while now, but didn’t really pay much attention to it. Until we heard that they made SALT FISH PIZZA.”

The pizza, they said, was “hot, tasty, bounty-full of toppings and made with love”.

Opting for first names, Pearl and Althia, admitted they were initially sceptics.

“But I thinking about it and really salt fish does go well with bake, it already has the vegetables, which are the basic elements for a veggie pizza,” reasoned Pearl.

Althia quickly interjected, “Just add the cheese. Didn’t think I would love saltfish paired with pineapple, but even that added to the taste.”

Shortly after the tasting, the pair concluded that the dish was a “must buy”.

And just who are the people behind Shimmerlicious?

In 2011 when Anthony completed her studies in information systems and management she looked around and saw no vacancies for her skill-set.

“My aunt, who sells food at Lake Asphalt, casually suggested that I too get into the food business. At first I was like, ‘nah’, then I thought about it and decided to do some pizzas for her to take with her on mornings. They, to my pleasant surprise, sold quickly and I kept at it,” recalled Anthony.

She quickly capitalised on the family’s front yard space and began selling pizza slices outside her home. Before long, slices, turned into customer requests for whole pizzas.

Shimmerlicious’ clientele grew and in 2015, Anthony registered her business.

Soon enough, Anthony said she realised she needed help to fill the quickly increasing orders and hired one employee.

Sales have picked up so much since the introduction of the saltfish pizza, that Anthony now has a rotating cadre of six temporary workers.

The working hours allows her staff time with their families, as she opens Wednesday to Saturday from noon to 10 pm.

‘It feels good knowing that I began something on a lark and now it’s a sustainable business and it can generate employment for people within my own community. That’s more fulfilling than increasing my customers base,” Anthony stated. She credits her promotion images, photos and videos to her husband, Michael.

Anthony opted once to set up her silver mobile pizzeria at Pt D’or Junction, thinking that being “front line” would attract more customers.

She soon learnt that selling pizzas with “bounty-full toppings” in her community was more profitable.

“They loved it. I surprisingly loved it,” she said of her experiment. “I really didn’t think it would taste that good. I thought initially people would be like, ‘saltfish on a pizza?’ Which is exactly what they did, but then after their curiosity and anticipation kicked in, they tasted it and the reviews have been awesome,” she stated

A natural go-getter, Anthony then decided to take the tasting to the people, namely corporate La Brea and the surrounding schools, many of whom became supportive customers. Her service now includes delivery to as far as Point Fortin.

Eventually, she enrolled in Scotiabank’s Vision Achievement Business Training Programme and although she did not place first, she left the seminar armed with more business savvy and further exposure.

“I don’t let things get me down. I know this has all turned out this way only because it is God’s perfect will.”

So what’s in the cards for Anthony and her business?

“Listen to my customers, improve on my service, what we offer and come up with other delicious, fun, out-of-the-box toppings to keep our existing customers…and the new ones, smiling.”