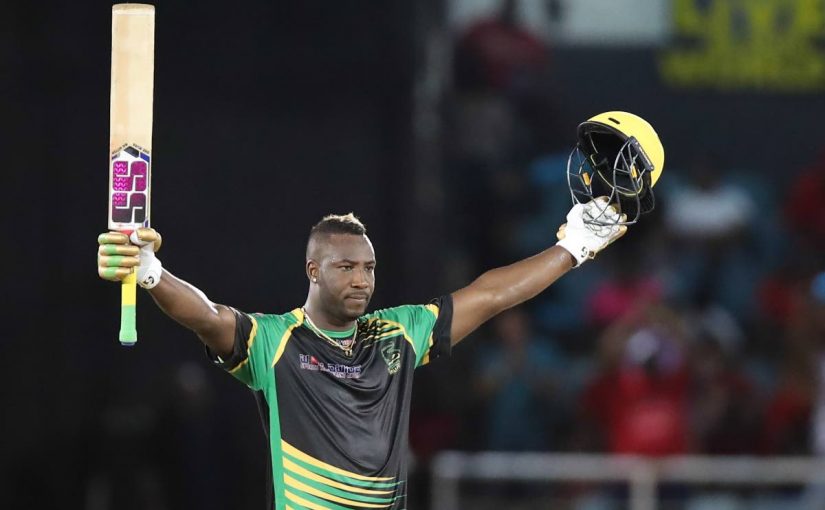 IT was scripted to be the perfect evening for the Trinbago Knight Riders – a massive total of 223/6, raucous Oval crowd and their Bollywood star owner Shah Rukh Khan giving something of a victory lap at halftime to wave to his adoring fans. The Knight Riders then had Jamaica Tallawahs reeling at 16 for four with victory seemingly imminent as the TKR fans erupted in a frenzy with the fall of each wicket.

The Caribbean Premier League (CPL) party was in full swing at the Oval and no one could fathom what was about to occur. Cricket coaches stress catches win matches and the fairytale ending most definitely would have happened had Ali Khan held on to a catch to dismiss Andre Russell for a first-ball duck off leg-spinner Fawad Ahmed.

Instead, he grassed the chance and Russell tore up what was a beautiful TKR script and created his own with him playing the starring role and TKR bowlers relegated to fillers. Russell pulverised the TKR bowlers in a Man of the Match performance of 121 not out from 49 balls that few would ever forget.

The Jamaican captain had earlier taken a hat-trick in the last over of the TKR innings to build some confidence and give the visitors something to cheer in what was a dreadful bowling performance. Russell got rid of Brendon McCullum (56), Darren Bravo (29) and Denesh Ramdin (0) in successive balls but the Knight Riders still managed to post the highest ever CPL score.

Pacer Ali Khan then rocked the Tallawahs top order with his clever variations, sending Glenn Phillips (6), Andre McCarthy (0) and the dangerous Ross Taylor (1) back to the pavilion cheaply. Shannon Gabriel then took Rovman Powell’s off-stump out the ground with a thunderbolt delivery that had the stumps lighting up and Jamaica on the ropes.

Opener Johnson Charles stuck around, however, and alongside Kennar Lewis pushed the score along when Ahmed bamboozled Charles with a googly that defeated his defensive prod and crashed into his stumps. At 41 for five, the pressure was on new batsman Russell who was staring an embarrassing defeat in his first match as captain.

He signalled his intent first ball, slog sweeping Ahmed but got too much under and skied it towards deep mid wicket where Ali Khan seemed to lose track of the ball and dropped the catch.

Russell would make him pay dearly for that. The 30 year old, who missed a year of cricket in 2017 due to a doping whereabouts violation ban, is clearly on a mission to remind everyone about what he is capable of.

He and Kennar Lewis – mostly Russell – put on a 161-run partnership for the sixth wicket to turn the match on its head.

Russell hit an astounding 13 sixes and six fours on his way to scoring the fastest ever CPL century off just 40 balls.

Dwayne Bravo, Sunil Narine, Fawad Ahmed, Shannon Gabriel, Javon Searles, all were treated with utter contempt but fairly by Russell who chose no favourites in a brutal display of power hitting that silenced the partisan Oval. Had it not been for the lights, thousands of cars parked and DJ, someone passing outside the Oval might not have known there was CPL match being played.

Russell’s power has to be seen to be believed, almost decapitating medium pacer Dwayne Bravo with a shot that flew past the bowler’s head and went like a rocket to the boundary. He repeated the shot against Javon Searles who stuck a hand at it but could not hold on.

That statisticians count that as a dropped chance is cruel as Searles should be given a medal of honour for bravery instead. What started as a brave fightback by Russell was turning into a match-winning performance as the run-rate kept getting lower and lower. The right-hander lose the ball at least three times as nowhere was safe to bowl or sit in the stands.

The savagery on display had young TKR fans in the crowd crying as the match slipped away. Russell could care less. With six runs needed from the final over to be bowled by an uncharacteristically expensive Sunil Narine, TKR and their fans were relieved to see Imad Wasim on strike and not Russell. Jamaica, however, scampered a single in the second ball and Russell needed just one swing to send the ball sailing over long-on to complete an epic chase and an unlikely victory.

Young, moving on up

Sat Aug 11 , 2018
He’s been hailed as Prime Minister Dr Keith Rowley’s right-hand man. Some have even jokingly described him as the Minister of Everything. Regardless of the perception, there’s no denying that Stuart Young is an emerging force within the People’s National Movement (PNM). One week ago, Young assumed the unenviable portfolio […]