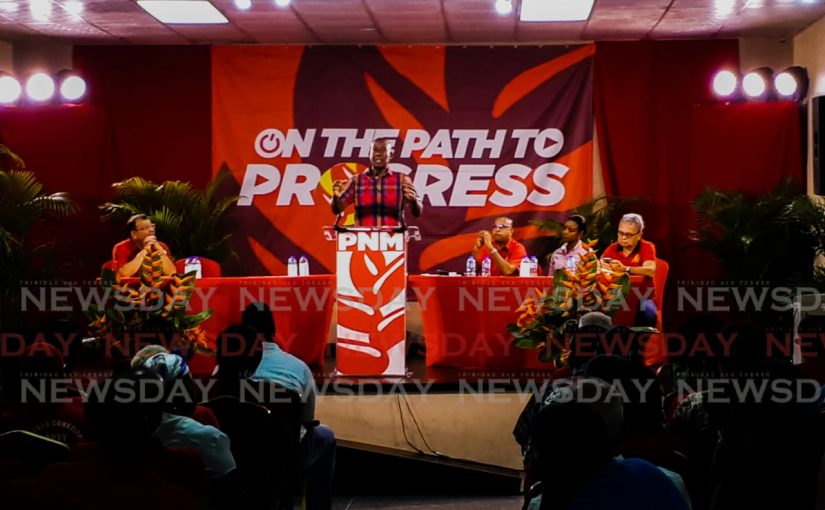 Days before Friday’s planned nationwide shut down by the trade unions, Prime Minister Dr Keith Rowley took aim at civil aviation workers, warning that if they abandon their post they may face personal legal consequences. At a political meeting at Marabella last night to discuss the resurgence of Petrotrin, Rowley reminded civil aviation workers they are part of an essential service and not entitled to take industrial action. He said they would not only be breaking the law if they engage in such action as is being encouraged by their union leader Public Services Association (PSA) president Watson Duke, but they would be putting people’s lives at risk. “I want no fight with anybody. The government is not engaging in a fight with anybody, but we will enforce the law if civil aviation workers take irresponsible advice and shut down the airspace. I will instruct the Attorney General (Faris Al -Rawi) to sue every one of them personally,” Rowley. His statements to dissuade workers from engaging in the September 7 shutdown of the country echoed similar sentiments already expressed by Cabinet ministers of Education, Public Administration and Health, threatening the docking of pay as well as fines and imprisonment if workers under their portfolios heed the union’s calls. New Balance Homme Members of the Oilfield Workers Trade Union (OWTU) who are in the firing line when the refinery closes, were blocked from entering the public meeting by police officers who formed a human barricade at the entrance to the building where it was held. The workers squared off with the police who told them the building was filled and it would constitute a fire hazard if they were allowed in. The workers said they wanted to go inside and address pertinent questions about the restructuring of Petrotrin with Rowley, Energy Minister Franklin Khan and Finance Minister Colm Imbert who all addressed the issue. While the police kept them at bay on the outside, on the inside Rowley describing the meeting point close to where the Pointe-a-Pierre refinery is located as ‘the epicentre of the action being taken” said his government was not shying away from facing the people who will be affected by the decisions they have taken. He said he understood the repercussion of the action they were taking and needed little advice as to their responsibility for the people for the people of the southland for whom the refinery was their bread and butter. air max thea Rowley said they were committed to treating the human side of this development and no one would go home without an attractive separation package. He also assured no one will end up on the street eating from garbage bins. He promised opportunities for workers by offering them shareholding in the ‘new Petrotrin’. He affirmed that they are not closing down Petrotrin but they are going out of the refining business which is not efficient. asics pas cher He said insults would not change the government’s mind. He said if there is an alternative that could improve the current situation government would grab it and put it in force. At present, he said, they have no buyers for the refinery, but as they are going out of refining it opens up the doors for discussions. He confirmed that he will be meeting with JTUM and NATUC at 3 pm on Thursday and said he was curious to hear what they going to tell him as his government took one and a half year analysing this matter before coming up with a sane, sober and discipled way to treat with Petrotrin. On threats by Opposition Leader Kamla Persad-Bissessar to move a vote of no confidence in him, Rowley said that was the best news he had heard for the week and encouraged her to file. newbalance 2018 “You file the motion and I give you the assurance the date would follow immediately from the government. ugg australia pas cher It is time the country knows how we got where we are, why we are where we are and what we are doing about it.” Rowley said unlike other politicians, he had no fear of losing his job as prime minister because he is not in love with it.