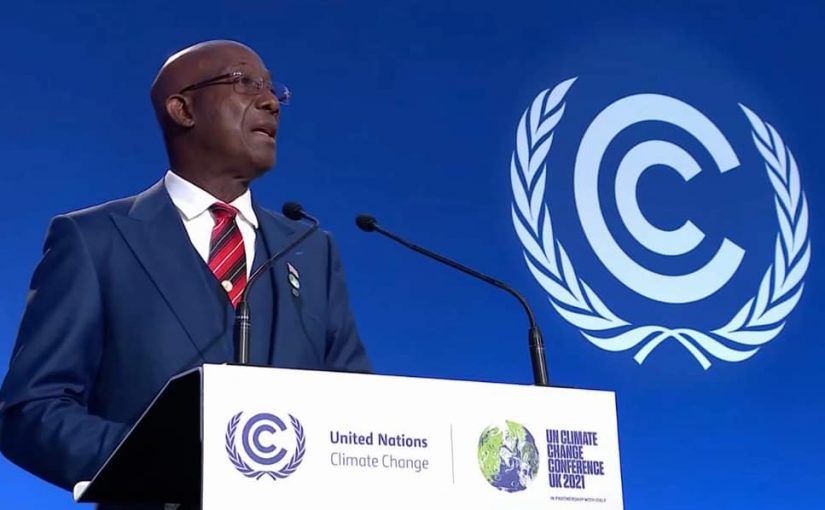 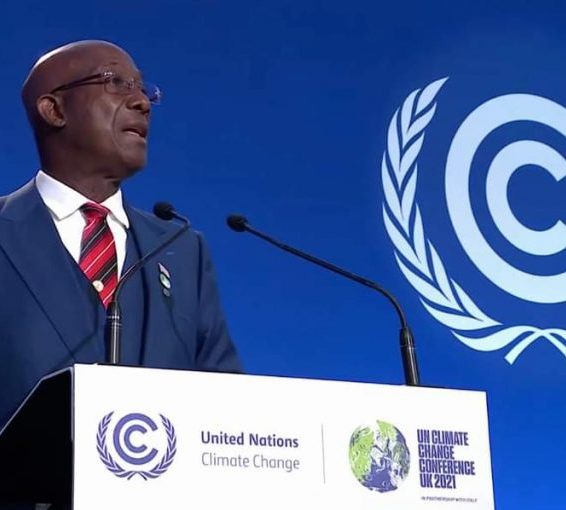 THE Prime Minister has called for help against the loss of coastline and coral reefs suffered by countries like Trinidad and Tobago.

He was addressing the World Leaders Summit at the UN Climate Change Conference known as COP26 in Glasgow, Scotland, on Tuesday.

Dr Rowley suggested in some cases it was too late to talk of climate-change mitigation but rather, the conversation should now be about adaptation plus funding against loss and damage of habitats.

At the event monitoring countries’ efforts to restrain global warming (caused by emissions) to 1.5 degrees above pre-industrial levels, he also sought help for vulnerable countries to transform to low-carbon economies.

The PM said at this pivotal time, the recent report of the Inter-Governmental Panel on Climate Change showed a severe shortfall in closing the emissions gap, with any temperature rise above 1.5 degrees Celsius posing long-term and permanent consequences, especially to small countries and economies such as TT.

He urged a greater collective ambition to shift the world from its current unsustainable path.

“Mr President, while mitigation ambition is driven by the 1.5 degrees-Celsius goal, the global goal on adaptation has failed to achieve a commensurate level of attention and action. At COP26, we must ensure that we have an outcome that helps to raise adaptation, ambition and action.”

Rowley wanted COP26 to set down details for a global goal on adaptation.

“Trinidad and Tobago is a small island developing state already experiencing the effects of climate change. Loss and damage are already clear in the aggressive erosion of our coastline and the bleaching of our coral reefs. Tackling loss and damage must remain a critical and core issue of any global climate-action framework.”

Rowley said it was hard to access financing for such projects.

“We need funds like the Green Climate Fund to establish specific streams for loss and damage finance to ensure that this is prioritised in the same way as mitigation and adaptation.”

He also called for a balance between public funding for mitigation and adaptation.

Rowley hailed the US for doubling its climate finance support, urging other donors to follow suit.

“The mobilisation of private finance will also be critical for securing the urgently needed investment, particularly for the transformation of our energy sectors.”

He promised to report to the required standard on TT’s commitments under the Paris Agreement, with some assistance.

“As an economy largely based on oil and gas and petrochemicals, we in TT recognise our responsibility in transitioning, over reasonable and manageable time, to net zero (carbon emissions). We have set very ambitious targets aimed at diversifying our economy. We have embarked upon ambitious plans to reduce emissions and build climate resilience, but we will need help.”

“We are in the process of establishing the largest utility-scale solar renewable-energy project in the Caribbean, with a capacity of 112 megawatts, accounting for ten per cent of our power needs, and we plan to increase this complement to 30 per cent by 2030.”

Rowley said TT had policies and measures to phase in electric vehicles.

He also told the conference, “We recognise the need to address the socio-economic issues associated with the energy transition and have developed a Just Transition of the Workforce Policy aimed at re-skilling, retooling and developing new capacity for a low-carbon economy,

“We are pursuing measures to facilitate investment in green hydrogen to provide green feedstock to our vibrant petrochemical industry.”

He said he will encourage the disposal of industry-generated carbon dioxide in carbon-sequestration projects.

Rowley said beyond the rhetoric and pledges, each country must be serious about urgent action in this decade. He said TT will work with all countries towards creating a safe and secure world for those yet to be born.

“It is my sincere hope that we will all be able to look back at COP 26, and the commitments and progress made here in Glasgow, as key steps towards a healthier salvageable Planet Earth.

“Let’s work for survival, of ours and all species. Let’s not choose extinction! Mr President, I thank you.”