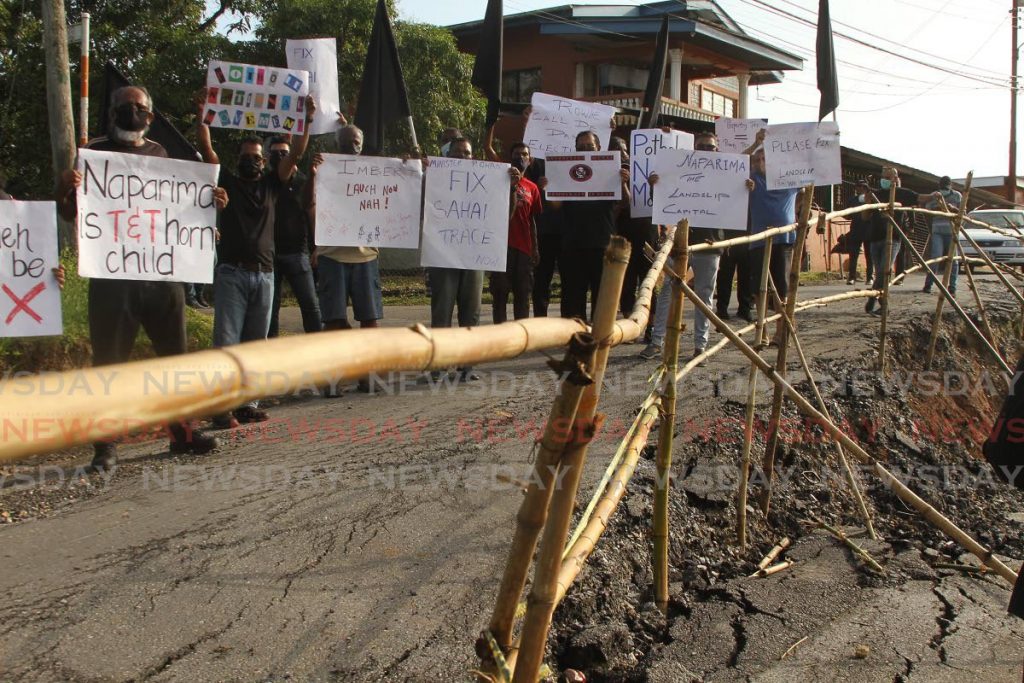 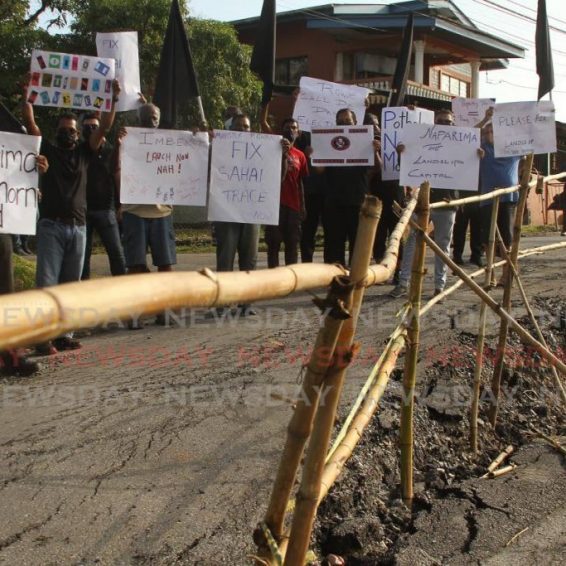 Residents of Realize Road, Princes Town hold placards protesting the state of infrastructure in the Naparima constituency during a protest on November 3. – Photo by Marvin Hamilton

Naparima Member of Parliament Rodney Charles is concerned that Government is treating infrastructural issues in his constituency with a level of disregard that he claims, is comparable to the treatment of an “outside child.”

Charles shared his concerns during a protest along Realize Road in Princes Town on Wednesday.

As he stood at the bottom of a landslip along the road, Charles staged a mock funeral for the Government. During the ritual, he exclaimed, “We are gathered here to a burial ceremony of the PNM.

“We are fed up of the neglect of Naparima; we are treated as if we are outside children.”

Pointing to the landslip, Charles added, “Look at what we have to face as a road. And today brothers and sisters, we come to bury (Works and Transport Minister) Rohan Sinanan and we have last rites for him.”

Charles then instructed a protestor to put dirt on a fake grave with a pitch fork while other protesters held placards with statements like, “Naparima is TT’s Horn Child.”

“And as you finish that we have another one (fake funeral) for (Prime Minister) Dr Keith Christopher Rowley. And after that, we have one for (Minister of Local Government) Kazim Hosein,” Charles said.

Wednesday’s protest started around 6.40 am on Realize Road and then moved to Lengua Settlement.

Lengua/Indian Walk councillor Rajesh Lall claimed landslides in the area, like the one on Realize Road, are caused by leaking WASA pipelines. He also claimed these leajs and ongoing roadworks are disrupting the area’s water supply.

He explained, “We have a really dire situation on Lengua Road right now where for over 14 days, residents have not had a pipeborne supply stemming from a major landslip repair.

“It is at a breaking point now because I’ve been getting calls day in and out. This might have been avoided if the Ministry of Works and WASA (were) liaising with each other before they start the work.”

Resident Khairool Hosein told Newsday that Lengua Settlement’s water and road problems are no surprise; he has lived in the community for most of his life and has always faced water issues.

“Thirteen years now landslips have been happening and we have made several representations to every single government. Up to this day, every time we go (to those in authority) they say they coming now, they coming now to fix but they never come.

“Water is the same problem…so the people fed up in the area here completely with water, road and electricity.”

Wednesday’s protest in south Trinidad was the latest in a series against the Works Ministry and WASA.

Intensifying since September, residents of communities including Penal, Barrackpore, Moruga, Tableland and Princes Town have protested for better roads and more a consistent water supply.

In a press conference on October 25, Sinanan responded to the protests and said his ministry does not discriminate in fixing the nation’s infrastructural issues.