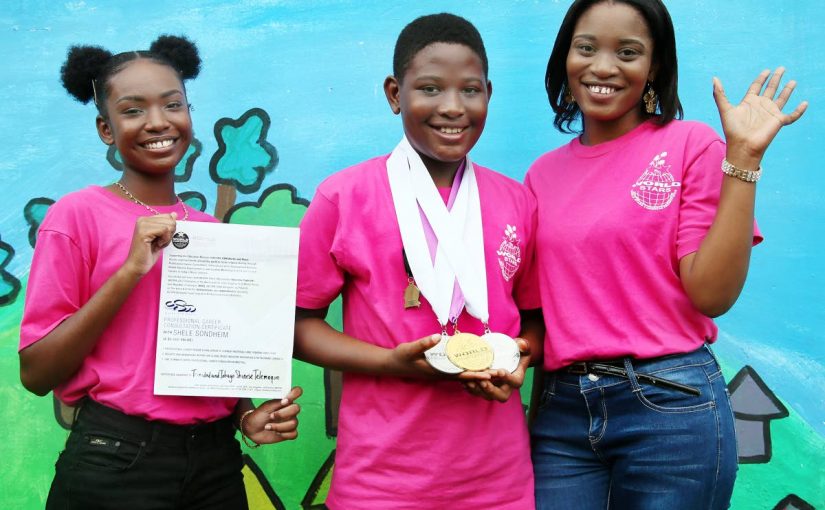 FOUR members of the John John Police Youth Club entered the World Championship of the Performing Arts (WCPA) in Hollywood, California in July and returned to TT with four medals and a scholarship.

The four who represented TT were dancer Shania Julien, vocalists Donelle Barry and Shinese Telemaque and drummer Akeem Jobe. They spoke to Sunday Newsday at the Police Youth Club, just off the Eastern Main Road, Laventille

Telemaque, 16, won a scholarship after entering the vocal competition and performed pop and gospel. She also entered the modelling category after being constantly told she had the physique of a model. WCPA organisers also held a boot camp where Telemaque said she learnt how to be a better performer.

After being ordered to join the youth club by her father, the form five student of Caribbean Union College said she Kim David, a member of the church that uses a room in the Winston Spree Simon building where the youth club is housed, told her she had an amazing voice.

When she learnt about WCPA, last year, Telemaque mustered confidence to try out and topped the Scholarship Competition of Talented Teenagers, the local leg to attending the WCPA. Telemaque, who plans to return to the competition next year, wants to be a lawyer.

Jobe, 11, won two silver and a gold medal for playing the African drum. The Sacred Heart Boys’ RC student played an African beat called Abaday in the contemporary section, the Culu Culu rhythm in the open and won gold, and Sniper’s Portrait of Trinidad in the individual category. Jobe, who has been playing African drums for two years and was part of the school’s winning team at Sanfest last year, wants to be a pilot and musician. His message to others is “listen to your elders and don’t be rude and disrespectful”.

Julien said next time around, she will bring home a medal.

The 18-year-old performed in three categories–gospel, contemporary and folk. The self-taught dancer said she is following in the footsteps of her mother who introduced her to the artform. Like the others, Julien was drawn to the youth club following its relaunch four years ago. On her next trip to the US to represent TT, Julien plans to include modelling and playing an instrument to her repertoire. Her lesson from the competition was to have faith in herself. She admitted her competitors intimidated her, but it was her first time on a large stage and said it would not be her last. The aspiring choreographer recalled being rewarded with US$50 after she returned an iPhoneX to its owner when she found it on a ride at Universal Studios.

WCPA contestants must be between the ages of 11-25. Each contestant has 59 seconds to perform and the local competitors said it was a “rush” having to preform their best in less than a minute. The children were accompanied by ASP Oswain Subero and WPC Cleo Gervais, leaders of the youth club.

Sun Aug 12 , 2018
On April 8, 2007, when Andrea Khan went into premature labour, doctors told her and her husband Riaz, only one of their twin daughters, Mariah, would survive. They said Mayah, who was so small she had to be held on a pillow, would not make it. But she survived and […]