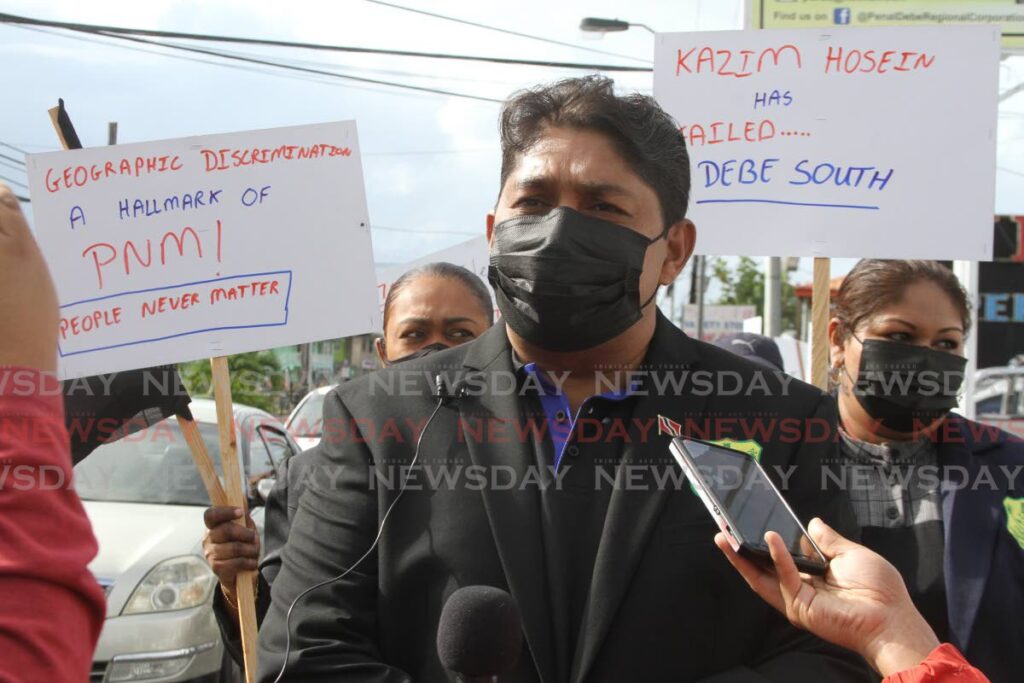 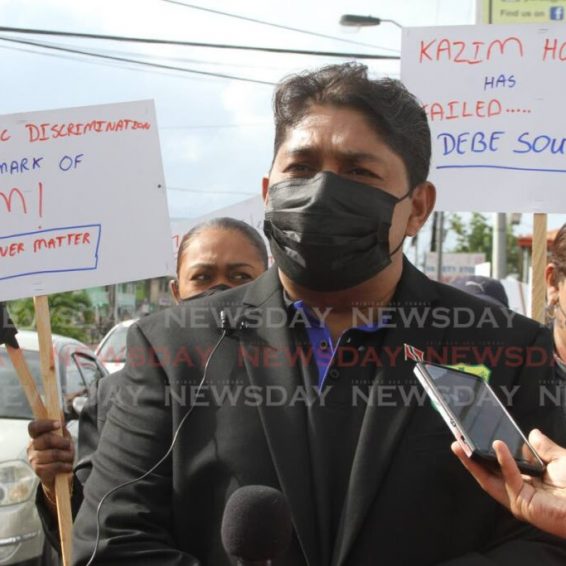 Debe South residents hold up placards as they demand a by-election be held for the vacant local government seat in their district during a protest outside the Penal/Debe Regional Corporation on Friday. – Marvin Hamilton

Penal/Debe Regional Corporation (PDRC) chairman Dr Allen Sammy wants to know how fresh Tobago House of Assembly (THA) elections were organised in less than a year but a by-election hasn’t been called in Debe South, more than nine months after the area’s former councillor Purushottam Singh died in February.

Sammy questioned the rationale used to determine which election was more important as he led Debe South constituents in a protest at the PDRC Headquarters on SS Erin Road in Debe.

After Singh’s death, Sammy said the corporation followed all the requirements to declare the seat vacant and Cabinet did so in May.

But since then, Sammy said nothing further has been done.

A confused Sammy asked, “You’ve had the time and the place to call another election (in Tobago), find the EBC, involve the EBC in allocating new seats and yet you can’t call a by-election?

“They’ve been properly informed by the corporation about the vacancy, we met all the requirements of the state, over 100 days have passed and they’ve not done anything about it.

Given there’s nothing more he can do to resolve the situation, Sammy said he’s sought the help of Oropouche West MP Dave Tancoo and Opposition leader Kamla Persad-Bissessar who had sent a pre-action protocol letter to Attorney General Faris Al-Rawi this month.

But Sammy has a theory about why no by-election has been called in the electoral district to date.

He explained, “I think what they are trying to do is to delay the election until there’s one year remaining because there’s something in the legislation that permits them to leave it vacant in the final year.

“That’s clearly where they are heading, I think that this government realises that they are on the way out and that they don’t want to be further embarrassed by an election loss in Debe South.”

Regardless of the reason for the election’s delay, Sammy said the vacancy is putting pressure on Barrackpore West Councillor Nicholas Kanhai and La Fortune/Debe North Councillor Krishna Persadsingh who are both acting as caretakers for Debe South.

Lamenting that the residents of the electoral district are begging for a proper councillor, Persadsingh is also questioning the urgency in which fresh THA elections were organised.

He said, “The late Purushottam Singh died on February 14 and since then, the government has not seen it fit to call the by-election so that these people can be represented.

“Our national anthem talk about every creed and race finding an equal place and for some reason, the government of today – the PNM, the Rowley led administration – has denied the people of Debe South that right to be heard.

Chairman of the Penal/Debe Regional Corporation Allen Sammy speaks to media during a protest outside the corporation on Friday. – Marvin Hamilton

“We cannot use covid as an excuse because we’ve had the THA election in January and three by-elections and in a few days on December 6, they’re going to have another election in Tobago.”

While he embraces his role as Debe South’s caretaker, Persadsingh said it has also been a challenge when his duties as councillor of La Fortune/Debe North is considered.

He lamented, “We (Kanhai and I) have tried to fill the void that have been left but it is extremely difficult because we have our own electoral districts to take care of.

“We try to ensure that these residents still have a voice in council and that they can still access the services of the corporation.”

Persadsingh explained that Singh’s office was closed upon his death and as such, he and Kanhai are using the resources of their electoral districts to oversee the administrative operations of Debe South. But this is unsustainable.

He explained, “It also means that there’s a strain on our offices to administer those additional functions.

“It’s not right because the laws of the land indicates that each electoral district has a councillor and has these resources.

“So why is the Rowley administration denying the people of Debe South representation?”

Echoing his colleagues, Kanhai said the government must explain to the public why they have not called a by-election yet for Debe South.

Kanhai told Newsday, “In January, we had THA elections which didn’t go in favour of the PNM. So they went to Parliament, they went to EBC…

“They increase the seat to 15, they went back to Parliament and had that passed, proclaimed and they had enough time to call another election within 12 months in Tobago.

“But the people of Debe South today (Friday) makes 176 days since the seat was noted as declared vacant by cabinet (in May).”

Newsday was unable to get a comment from Local Government Minister Kazim Hosein on the issue.

On January 25, there were by-elections in five electoral districts after councillors and mayors in those districts contested and won positions in the August 10 general election and were sworn in as MPs.

The last local government election was held in 2019 with the next such election due in 2022.