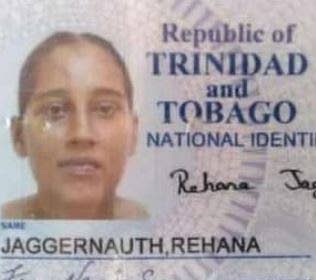 Still grieving over her father’s death, Rehana “Rena” Jaggernauth left her Moruga home last week to join with relatives in Chaguanas to be part of a prayer service to honour his life. But the mother of four, 32, went missing on Friday and her semi-nude body was found floating in the Guayamare River, Caroni, on Sunday afternoon.

She did not get a chance to attend the service of Suresh Baboolal, 57, on Saturday, 40 days after he fell from a roof and died.

“We are hoping that the police do what they have to do. We cannot say at this time what is the cause of death. For now, we do not know how she died. She was a good girl, and a lot of people liked her. She was always willing to help somebody. The autopsy is for later in the week,” a relative said.

The relative asked to remain unnamed.

Jaggernauth, who was unemployed, lived at Marac Village and was at the family’s Enterprise home since last week.

From what relatives were told, she played Play Whe and won on Friday.

Chinese national shot in the face week after SUV fire-bombed

“She won a $2 mark then left to go about one-quarter mile from here (Enterprise) to play roulette with the money. It seems she met some people or friends along the way. That is all we know,” he said.

Jaggernauth said Baboolal, a construction labourer and father of two, fell on a construction worksite in the Santa Cruz district. While the death has been deemed accidental, relatives said they still want closure from the police.

An autopsy is scheduled for later this week at the Forensic Sciences Centre in St James.