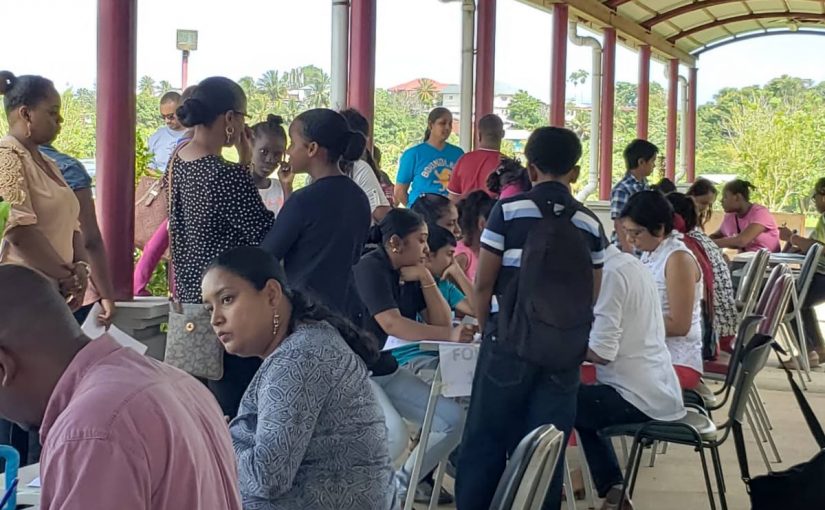 STUDENTS who will be entering secondary school next term were asked to sit in the corridors of the Princes Town East Secondary School yesterday.

This was because the air-condition in the classrooms malfunctioned two years ago. Yesterday, the teachers told Newsday they had made many complaints to the Education Ministry. They also said the ceilings in many of the classrooms have collapsed.

TT Unified Teachers’ Association representative Jason Maharaj said 85 per cent of the children who registered yesterday asked for transfer forms, and many wanted to know if they could get a transfer before school reopens in September.

“The school was designed for air-condition and the H-VAC System and it has been down and not working since January 2016,” Maharaj said.

To compound matters, Maharaj said, the ceiling is falling apart in most of the classroom and students and teachers have to contend with bird droppings. During the past two years, Maharaj, said, the population of the school has dropped from 850 to 265.

On January 11, MP for Princes Town Barry Padarath accused the Education Minister of jeopardising the education of Princes Town East students by not addressing a number of electrical and structural issues at the school. Protests continued yesterday at the Princes Town Presbyterian School No 1 school as the school’s PTA continued its call on Minister of Education Anthony Garcia to deliver on his promise and start construction of a new school. For the past three years, students of this school have been at the Presbyterian School No 2, on a shift system.

President of the PTA Nola Ramjohn-Karim said the minister promised that the Education Facilities Company Ltd (EFCL) would begin work within three months, but instead, three years have gone by and there is no sign of anything being built.

Ramjohn-Karim said despite the problems they had to face, students excelled at the SEA exams. Of the 89 who sat the SEA exam, 55 were placed in so-called prestige schools. “We also have four students in the top 200 at SEA this year,” she said.

Sat Jul 7 , 2018
THERE was a mad rush by parents requesting transfers for their children who wrote the Secondary Entrance Assessment (SEA) examination and were assigned to the troubled La Romaine Secondary School. There are usually requests for transfers from this school, but during the registration of some 141 students yesterday, there was […]