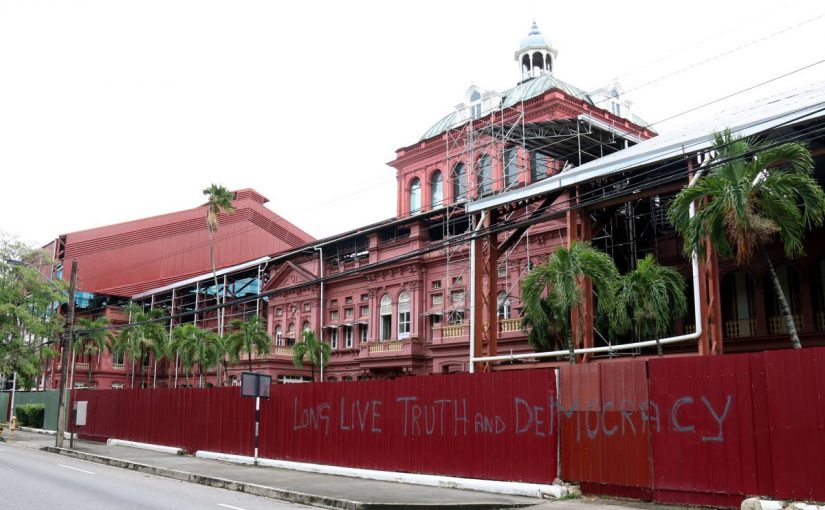 THE Red House has been strenghened to withstand an earthquake. but otherwise today is not a pretty sight.

It has a faded exterior, no glass in the windows and, largely, no roof.

Yet behind the galvanised fence that partly blocks it from public view, and underneath a huge protective shed roof, the building’s ongoing restoration to its former glory is evident in the busy construction workers dotted over the scaffolding, and in the noisy JCB diggers and cement mixers.

Udecott chairman Noel Garcia told Newsday he was sure the upgrade would be completed by the due date of November 30, saying, “Yes, I’m very confident. I just came out of a Red House meeting.

“The restoration will restore the Red House to its original splendour and allow both Houses of Parliament to sit simultaneously.”

The House of Representatives will sit in the chamber at the northern end, while the Senate will be accommodated once more at the southern end, which at one time housed the Appeal Court and High Court.

“We are still on track and…by the end of November all works would be completed and parliamentary staff would start to move from the waterfront to the Red House.”

The Red House was begun in 1844 and governent officials occupied it in 1848, though it was still incompete owing to lack of funds. Then, to mark Queen Victoria’s Diamond Jubilee, it was painted in 1897, so earning its current name, as well as being embellished and given its present form.

Also added to the north and south chamber ceilings was ornamentation of a type of plasterwork known as stucco, made by English craftsmen, installed by Italians and overseen by the German-born architect Daniel Hahn, who designed the improvements.

Previously, Prince Street had extended through the Red House as a carriageway, dividing it into north and south blocks. During the 1907 restoration, traffic was blocked but pedestrians could still pass through and enjoy a fountain installed along with a new rotunda that still stands.

The building was gutted by fire, ironically in the Water Riots of 1903. It was restored in 1907 with added galleries, one of which served as the parliamentary chamber.

The Red House was the scene of the stand-off between former prime minister (and later president) the late Arthur NR Robinson and Jamaat al Muslimeen insurgents in the attempted coup of July 27, 1990, when the latter took over the building at gunpoint, prompting Robinson to tell the Defence Force, “Attack with full force.”

With plaster decorations on the parliamentary chamber ceiling still visible from the road, Garcia confirmed, “We brought in Colombian architects and Cubans to assist us with the architectural aspect of the ceiling, so as to restore it to its original look.”

So far the building has been upgraded so it can now withstand an earthquake, having undergone seismic retrofitting as part of its ongoing renovation, Newsday learnt from Udecott corporate communications manager Roxanne Stapleton-Whyms.

She said the renovation has served to physically strengthen the structure of the building to meet current international seismic codes and standards. “It is a retrofit, not just a restoration.”

Stapleton-Whyms said the renovation consisted of 15 packages. Of these, two were complete: package one, “site works and demolition,” and package three, “seismic retrofitting of wall.”

Next due is package two, “construction of new structural works,” due for completion on August 25.

Three packages are due for completion in September.

Replacement of the render or plaster covering on both interior and exterior walls, including replacing paintwork, is due by September 15 (package four.) Newsday saw paint and render scraped off from the eastern corridor next to the parliamentary chamber, amongst other places.

The roof is due to be fully replaced by September 7 (package five). Garcia said, “We are changing the entire roof, made of slate and copper. It is about 45 per cent complete, with a completion date of mid August anticipated.” Newsday saw most of the northern and southern sections as apparently without an external roof but with internal support structures visible.

Along the eastern corridor, in place of the stateliness of the committee rooms where prime ministers once gave briefings on the nation’s affairs, windows gaped open forlornly. The scraping off of paint and plaster from walls along the corridor added to the desolate mood. Newsday also saw render scraped off from many other areas, including inside the rotunda.

Package eight, “refurbishment of all metal works” is due on October 4. Attesting to this was the din of a circular saw cutting metal, as someone somewhere pounded a hammer onto metal sheeting, all proof of progress.

Seven packages are due for completion in November.

Installation of all plumbing works, all air-conditioning, sprinkler system, and all electrical works (packages nine, ten, 11 and 13 respectively) are due by November 9. Garcia confirmed that all plumbing, electrical and airconditioning works are being done anew, the entire building having been gutted of the old installations.

November 25 should see the completion of installation of lifts; installation of finishes to floor, wall and ceilings; and external works, respectively packages 12, 14 and 15.

Newsday saw a metal staircase snaked up the rotunda, perilously high, although the status of the infamous “duck” weathervane that replaced the original sea serpent was blocked by a wooden walkway. Overseeing the works, container offices stand on the site, while workmen in helmets and safety gear ate lunch in the nearby shady Woodford Square.