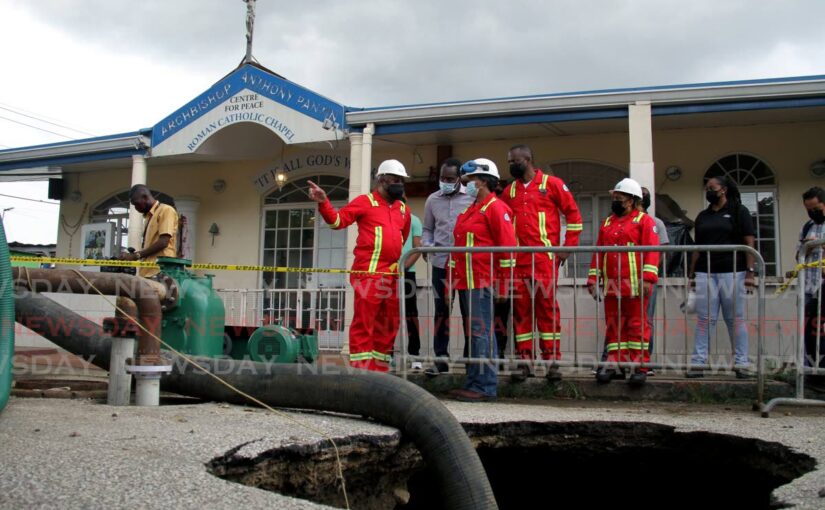 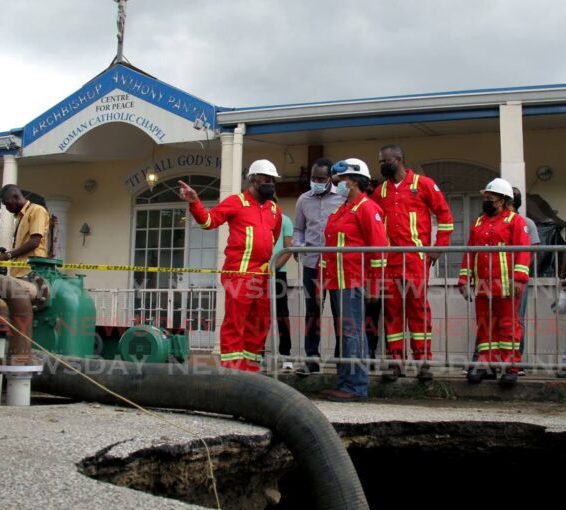 Officials take a closer look at the progress to repair the collapsed sewer line at Beetham Gardens, Port of Spain on Saturday. – AYANNA KINSALE

Speaking with reporters during a site visit on Saturday morning, Gonzales described the setbacks as “minor hiccups” as over 600 feet of iron pipes are expected to be replaced.

On October 14, a section of the 47-inch sewage pipeline collapsed causing a sinkhole.

In addition to restricting the flow of traffic on Main Street, residents also complained of a foul stench caused by the exposed sewage pipe.

Gonzales said the project was a top tier issue for his ministry, noting that he has received frequent updates on the installation of the pipeline by the Water and Sewerage Authority (WASA).

“Of course in these types of projects they are very susceptible to weather conditions, when it rains as the MP and the engineer explained, it does cause some kind of delay but so far as it hasn’t related to any major delay.

“From a financial perspective we will ensure that all the necessary internal resources inside of WASA are deployed to ensure this project is completed within a reasonable timeline but you will get some hiccups as you go along but nothing that would suggest that there is going to be any prolonged delay on this project.”

Wastewater manager for WASA Paula Nelson said among the difficulties workers faced during the replacement of the pipeline was a nearby TT Electricity Commission (TTEC) power line which crosses over the pipeline and the stability of the soil which delayed the installation of the pipeline.

Despite these difficulties, she said, the majority of the pipeline had already been laid and estimated the installation of the remaining pieces can be finished as early as December 23.

“The amount of pipeline that was to be replaced was 645 meters or around 24 lengths of ductile iron and we also had to put down three manholes.

“At this point in time we would have put down 19 lengths already and we still have to put down the three manholes and the remaining five lengths of pipe.

Nelson said the pipeline which collapsed was originally installed since 1961 and was in need of upgrade.

Laventille West MP Fitzgerald Hinds commended Gonzales and WASA officials for their response and efforts in restoring the pipeline.

He said while several residents continue to complain over overflows in sewage onto the streets, he was confident the WASA was doing its best to improve the situation as quickly as possible.

“As recently as last week I received a couple calls from residents that the backup, meaning the water coming from the manholes, was flowing onto the road.

“It happened again within recent times on at least two occasions and in my laymans way I assured them that is the very reason why the minister and WASA and the team are here to solve that problem.

“On behalf of the residents, we understand the problem, we understand what happened in respect of the rainfall and we are mindful that WASA is doing its professional best to rectify it in the quickest possible time.”