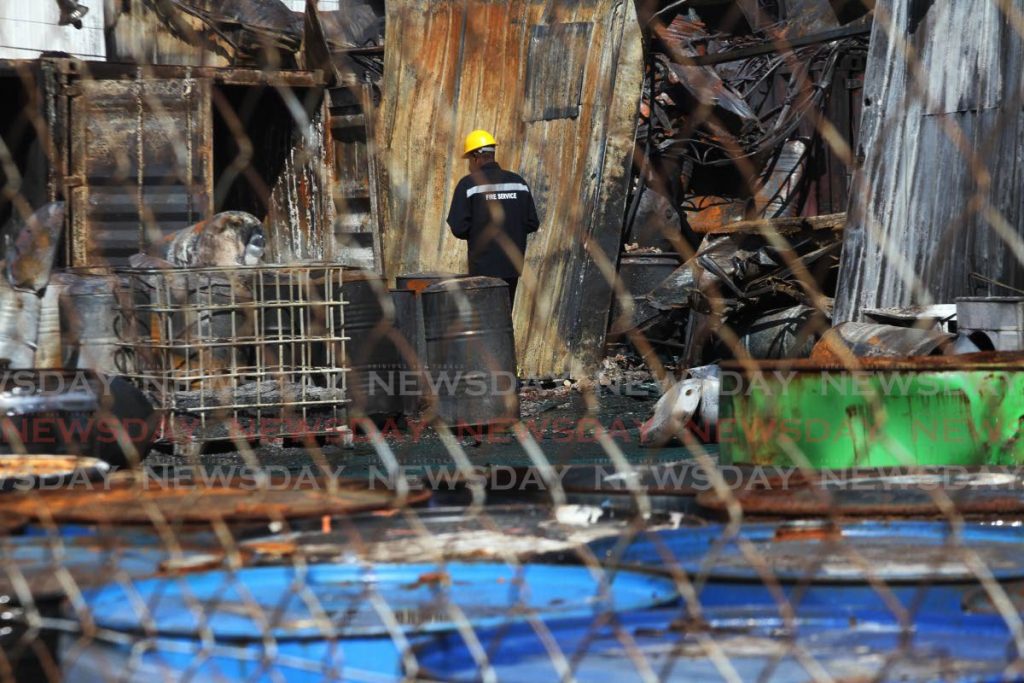 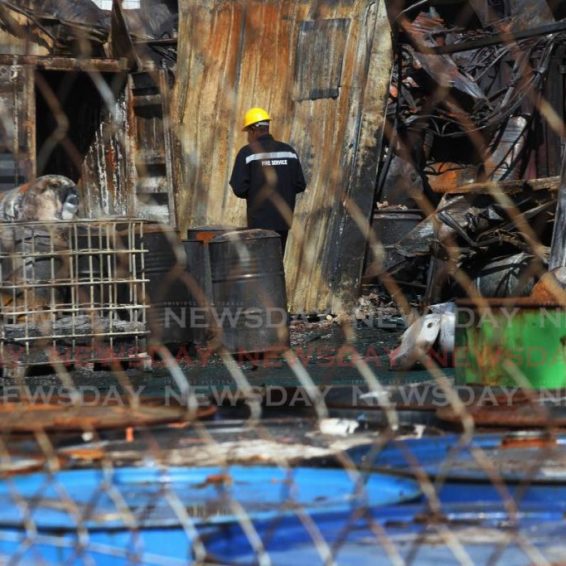 Investigating fire officers was at the scene of Gemini Inks Ltd on Tuesday morning after fire destroyed most of the company’s inventory in Point Lisas compound. – Photo by Marvin Hamilton

Shortly after 6pm, the fire started in the estate at the warehouse of Gemini Inks Caribbean Ltd. Within minutes the warehouse –which stores printing inks, printing solvents, sanitisers and industrial detergents – was engulfed in flames.

A few minutes later, fire officers began battling the blaze, which they eventually brought under control.

When Newsday visited on Tuesday morning, there was still smoke coming from the gutted warehouse, and burnt industrial steel drums littered the roadway in front. Fire officials were cordoning off the area to begin their investigations into the cause.

Destroyed drums, which contained highly flammable chemicals were seen on the road way after an explosion at Gemini Inks Ltd on Monday evening. When Newsday visited the scene on Tuesday, management and investigating fire officers were present on the Point Lisas compound. – Marvin Hamilton

One official told Newsday that if fire officers hadn’t controlled the blaze as quickly as they did, it might have been worse, given the drums contained highly flammable chemicals and the fire could have spread to nearby buildings.

During Newsday’s visit, representatives from the company arrived to assist in the investigation.

Murdered woman’s body exhumed for autopsy one week after burial

The company’s technical director Ed Jacob told Newsday there was little he could say about the blaze, except to summarise it as a ‘tragedy and nightmare.’

An investigating fire officer was at the scene of Gemini Inks Ltd on Tuesday morning after fire destroyed most of the company’s inventory. – Marvin Hamilton

He said most of the company’s inventory in the warehouse was destroyed except a few barrels of products that were stored at the front. Though unable to give the exact cost of the damage, Jacob said it was most likely in the millions.

Another representative explained the severity of the fire to Newsday and said the company supplies products to a number of companies, including printing ink to a local newspaper.