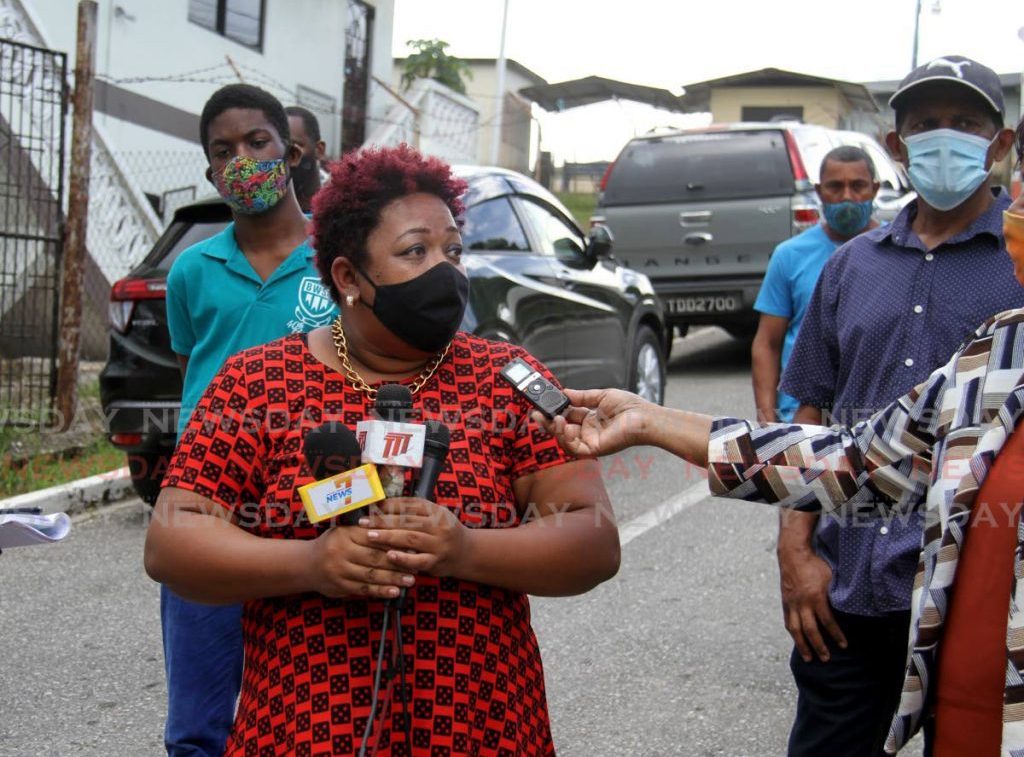 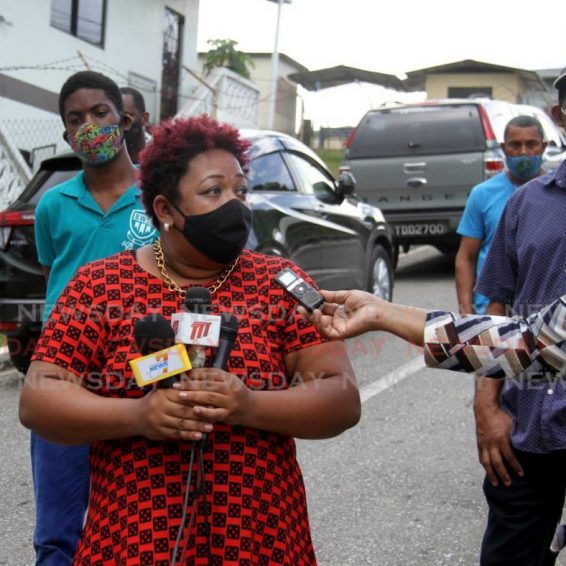 Members of the PTA of the Barrackpore West Secondary School engage in a peaceful protest outside the school on Tuesday. – AYANNA KINSALE

PRESIDENT of the TT Unified Teachers Association (TTUTA) Antonia De Freitas is denying any collusion with a community activist group to shut down schools, as suggested on a Facebook post.

The denial followed a Facebook post by a relative of the principal of the Barrackpore West Secondary School (BWSS) where members of the Parents Teachers Association (PTA) staged a small, peaceful protest on Tuesday morning.

One member of the PTA, Edward Moodie also denied any conspiracy with De Freitas to shut down any schools.

The protest was called to highlight the disadvantage unvaccinated students, who are not allowed to return to schools, will face with the resumption of physical classes for Forms Four to Six students.

Local police and Special Branch officers monitored the protest and took notes as the organisers gave details to the media.

TTUTA has publicly opposed the Ministry of Education’s (MoE) decision for teachers to simultaneously teach online and face-to-face classes, saying this is an impossible task.

Tuesday’s protest was triggered by an October 12 memo BWSS acting principal Edward Beharry sent to parents and guardians informing them that all classes from forms four to six will be taught face-to-face effective October 18.

It also caused a relative of the principal to post a question picked up by A Teachers Voice group on Facebook, “Is it true that TTUTA is encouraging protests to shut down schools?”

The relative’s comment claimed they had heard that a union official had been encouraging protests with social action groups with the objective of shutting down schools.

De Freitas distanced herself from any such action and appealed to the principal’s relative to remove the post which had generated a lot of negative feedback against the TTUTA president.

Moodie’s daughter, a form five science student, attends the school where he once taught. She is unvaccinated. Moodie said it was pure manipulation on the part of the MoE to coerce parents to have their children vaccinated.

“My child is not taking any vaccine and if you oppress my child, I am not going to sit idly by and take that. The MoE has breached the constitutional rights of our children and you all have breached the UN charter on education. Let us look at a solution.”

As a former teacher, he said he has had interactions with TTUTA and its president who empathised with their desire to stand in defence of a proper education for their children with the resumption of physical class and TTUTA’s resistance to simultaneous online classes.

“The PTA has been liaising with the principal to arrive at a workable solution for both students and teachers – vaccinated and unvaccinated.”

He said streaming of classes was suggested and individual parents agreed to purchase routers to have this system effected. He said he also brought in an IT specialist who explained because of the number of blocks in the building, it was cumbersome to fix the problem costing approximately $50,000.

The installation of additional routers, he explained, would also split the signal, causing connectivity problems in the rural area.

With no clear solution for unvaccinated children to access the right to education, a demonstration was organised to merely highlight the problem. As a courtesy, he said he informed Beharry of their plan to use the BWSS venue.

He said Beharry was upset and accused Moodie and the PTA of wanting to embarrass him.

“This has nothing to do with the acting principal. He has been trying but the information was taken out of context and posted on Facebook creating all kinds of havoc,” Moodie said.

Vice-president of the PTA, Nadia Aligour said, forms four, five and six were crucial steps in their children’s future and and pleaded with the MoE to find a solution.

“Right now, if you are not in physical school, you cannot do labs. Right now SBA’s are supposed to be starting. So if you don’t do your labs and don’t do your SBA’s you automatically fail the exams. This is our concern. We don’t want our kids to be left behind.”

PTA executive Missy Arneaud said her son, a form three student would soon be faced with this dilemma as he is unvaccinated.

Having health challenges from birth and having experienced family members succumb to the covid19 virus after receiving the jab, Arneaud said she did not trust the vaccine and will not be gambling with her son’s life.

“The school has excellent teachers and Mr Beharry has being doing a lot through the pandemic to ensure children get the education they deserve.”

Because the MoE is insisting only vaccinated children return to school, she said this puts children like hers, at a disadvantage.