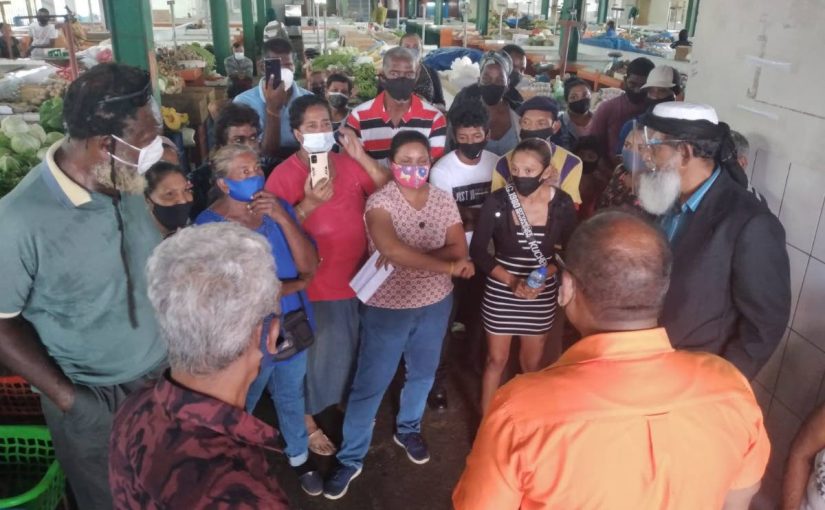 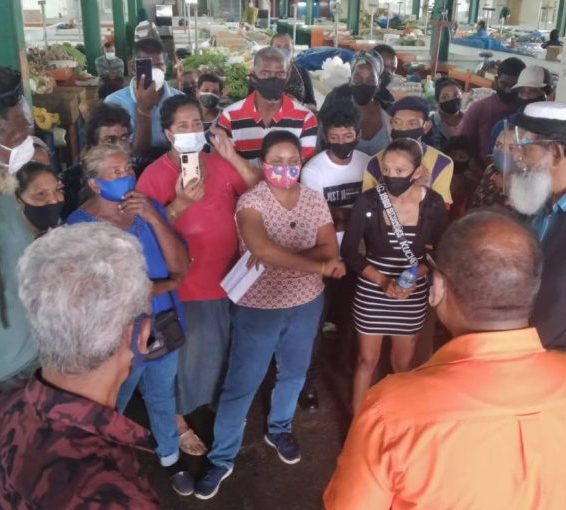 Princes Town market vendors met with officials of the Princes Town regional corporation at themarket, as officials seek to temproraily remove the vendors in order to conduct repairs to the market. –

THE Princes Town Regional Corporation (PTRC) has given way to market vendors, allowing them two more weeks to vend before the market is closed for repairs.

A compromise was reached on Monday morning as Princes Town Market vendors protested the closure of the building, where repairs were due to begin on Monday.

Vendors said they were given notice last Friday to vacate the premises over the weekend, but with no alternative accommodation provided, this was unacceptable.

They asked for repairs to be pushed back to January so they could enjoy Divali and Christmas sales.

They also expressed concern about the time frame in which the repairs would take place and sought a deadline.

Chairman of the PTRC Gowrie Roopnarine met with the 35-plus vendors during their demonstration and said it was all a big misunderstanding. He said the chairman of the market and vendors association was supposed to tell the vendors of the pending repairs and that they would need to vacate the premises long before Saturday. Alternative accommodation would be provided, he said.

Gowrie gave a commitment to push back the start of repairs to November 5. He said he would monitor the contractor and liaise with the corporation’s engineer to ensure the work is confined to a one-month period, weather permitting.

To vendors asking why repairs were being done now, Roopnarine said some things are not in the corporation’s control.

“This project, to repair ceilings, floors, stairs and general repairs, was estimated at a cost of $500,000.

He explained, “If we wait until January, the way the costs of building materials are increasing, the contractor may not be able to do the work for the price it was awarded. If this happens, the corporation will not have the funding to continue this project, so both the corporation and the vendors would lose.”

After his intervention, the vendors agreed to sacrifice for a month and continue vending outside the old market. Hairdressers and other small businesses who rent booths on the upper floor of the market have agreed to take the month off to facilitate repairs.

Activist Umar Abdullah, who intervened on behalf of the vendors, said Roopnarine was able to allay the concerns of the vendors and they had reached a workable resolution.

He hopes the repairs are completed within the stipulated month, as the alternative location will not provide shelter from the elements, safety and storage for the vendors’ produce.