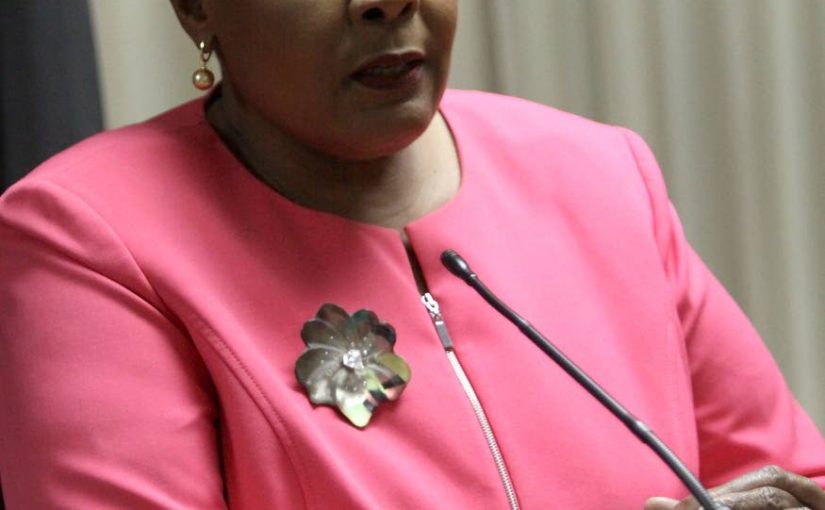 In a statement yesterday Weekes said she was “deeply saddened to learn of the passing of beloved wife, mother, community activist and Queen of the Santa Rosa First Peoples.” Cassar died on Thursday at the age of 66 after complications from surgery she had several weeks ago.

Weekes said Cassar worked for 40 years in the public sector before her retirement and devoted almost her entire life to the service of her country. Weekes said she knew Cassar since 1996 when she had been working at the Hall of Justice.

“I quickly became aware of the esteem in which Ms Cassar was held by members of her team and was struck by the diligence with which she executed her duties. She was fiercely loyal to the judge for whom she was the executive secretary for many years and involved herself with many other ancillary functions of the Judiciary until she retired.”

Weekes recalled during Cassar’s tenure at the Judiciary she held a deep concern for the welfare of the First Peoples of Trinidad and Tobago.

“She had always wholeheartedly embraced her indigenous identity and sought to encourage others to also take pride in their heritage.”

Weekes said Cassar’s inauguration as Carib Queen in 2011 acknowledged her many years of activism and her standing in the First Peoples’ community.

“I was pleased to follow her leadership as Carib Queen as she worked tirelessly to improve the unity and solidarity of the indigenous people and to secure greater recognition for their customs and traditions, such as stick-fighting.”

She said it was perhaps Cassar’s proudest moment to lead the processions last year which celebrated the one-off holiday which was awarded by the Government to recognise the history and contributions of the First Peoples to TT.

“This holiday was testament to the hard work of Ms Cassar and many others in bringing greater awareness of our indigenous peoples to the national community.”

Weekes recalled at a meeting with members of the indigenous community on May 29 at the Office of the President, she and Cassar had the opportunity to reminisce on their days at the Judiciary and on the long journey to the recognition of the achievements of the First Peoples.

“I join with the citizens of Trinidad and Tobago in honouring Jennifer Cassar’s extraordinary legacy and I extend my sincere condolences to her family, friends and the members of her community.”

Tomorrow, viewing of Cassar’s body will take place at the Arima Town Hall from 10 am to 12 pm followed by a procession through the streets of Arima to the Santa Rosa Catholic Church on Woodford Street for the funeral.

President of the Partners for First Peoples Roger Belix told Newsday, Cassar’s death came suddenly and there had not been discussions yet on her successor. He said when Cassar’s predecessor died from cancer the elders came together and selected a queen though the process may be different now.

Wed Jul 25 , 2018
LOCAL cement manufacturer Trinidad Cement Limited (TCL) has referred to the Caribbean Court of Justice (CCJ), in its original jurisdiction, a complaint that the State has applied the incorrect classification to its competitor, Rock Hard Cement. After hearing from attorneys for TCL, the State, Rock Hard Cement, its local distributor […]