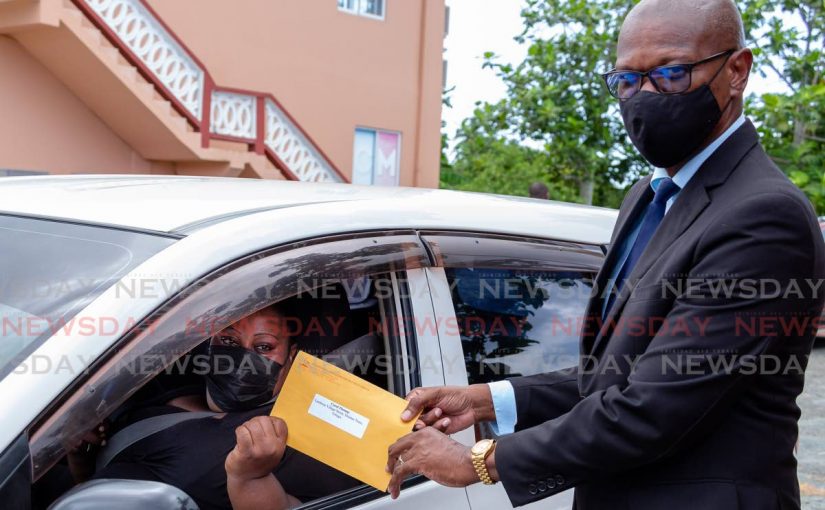 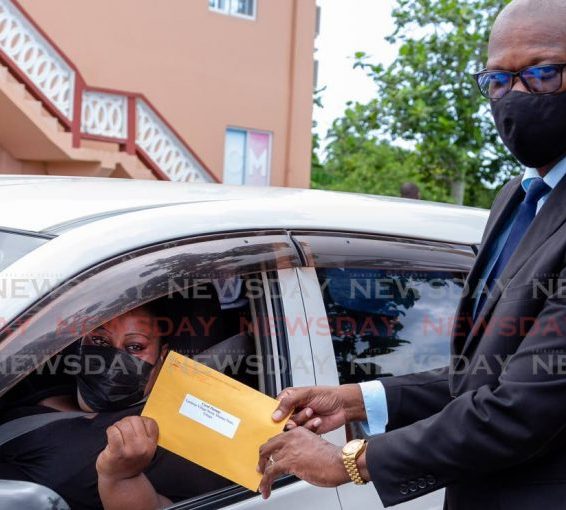 Elroy Julien, CEO of National Commission for Self Help Ltd, right, presents Carol Thomas with a grant for home repairs at a drive-through grant distribution ceremony at Barrington’s Court, Bon Accord. – DAVID REID

THE Anti-Corruption Investigations Bureau is investigating allegations of fraud at the National Commission for Self Help Ltd (NCSHL).

In one case, the police are investigating the award of a contract to a company whose owner is said to be related to a member of the commission.

The other investigation surrounds an employee of the commission said to have received a $20,000 home improvement grant.

Documents sent to Newsday by a source at the Ministry of Sport and Community Development – the line ministry for the NCSHL – showed that on June 29, 2020, the ACIB wrote to the commission’s CEO, Elroy Julien, to say WPC Sinnette had been detailed to investigate the two claims.

The letter said part of the investigation concerns the award of a NCSHL contract for $117,708.47 to a company on February 11, 2020 to construct a road in Santa Cruz. The ministry source said the owner of the company is a relative of a female employee of the commission.

The ACIB letter also pointed to a separate investigation into a $20,000 grant to an employee of the commission on November 19, 2018. The ministry source said this person no longer works with the commission.

The ACIB told Julien WPC Sinnette had to obtain: witness statements on both allegations; a copy of the commission’s tendering rules;copies of all files/contracts and relative documents pertaining to the two investigations; employee files of the person who received the grant and the employee said to be a relative of the contractor who got the award; the commission’s rules and procedures on contracts, loans and/or grants; and any other information she might need from commission employees.

Newsday contacted acting Snr Supt Walker of the ACIB on Wednesday about the investigation, which he confirmed.

Asked why there had been no closure, especially to the 2018 case, Walker said, “The investigation is ongoing. Like everything else, some things are affected by the pandemic. But other than that, I would not like to make other comment concerning the investigation.”

Documents sent to Newsday included a copy of a site visit attendance form dated January 23, 2020, which named four people and their company who had tendered for the road-building project in Santa Cruz. One of the contractors shares a surname with a commission employee.

Another document, a copy of a letter of offer dated February 11, 2020, shows the contractor was selected for the contract. valued $108,375 (though a total of $117,708.47 was approved for the project) to construct the road. This document bears the signature of the person from the commission making the offer and the contractor who accepted it.

Newsday also received a copy of a cheque-payment voucher from the commission showing a payment of $102,956.25 was made and was received by the contractor on March 20, 2020 for the road at Ramkissoon Trace, Santa Cruz Old Road, San Juan.

The contractor and his relative who works at the commission could not be reached for comment despite repeated attempts.

In the other case under investigation, Newsday was told a grant application for minor repairs and reconstruction was submitted in November 2018. An applicant can access up to $15,000 under this grant. The person submitting the application was an employee of the commission at the time.

The ministry source said this address was for a guesthouse, and the commission’s policy is that no assistance or grant may be given to repair any rental property.

Nevertheless, the application was approved in December 2018 and a purchase order valued at $19,939.38 was authorised in January 2019.

A former employee of the commission, contacted by Newsday, said when she spoke out against the award of these grants she was “oppressed, demeaned and dehumanised” to the extent that she decided to leave.

CEO Elroy Julien, contacted on Thursday, at first said he was unfamiliar with the police investigation but when told Newsday had a copy of the ACIB letter sent to him detailing the scope of investigations, he replied: “I myself cannot go into it. As you are aware, an investigation is ongoing, so I’m unable to say anything at this point in time.”

Asked if anyone had been disciplined or suspended pending the outcome of the police investigation, Julien said, “The matter is probably where it supposed to be and it would be premature for me to say…I don’t think it’s my place to say anything at this point in time, and I refer you back to the police.”