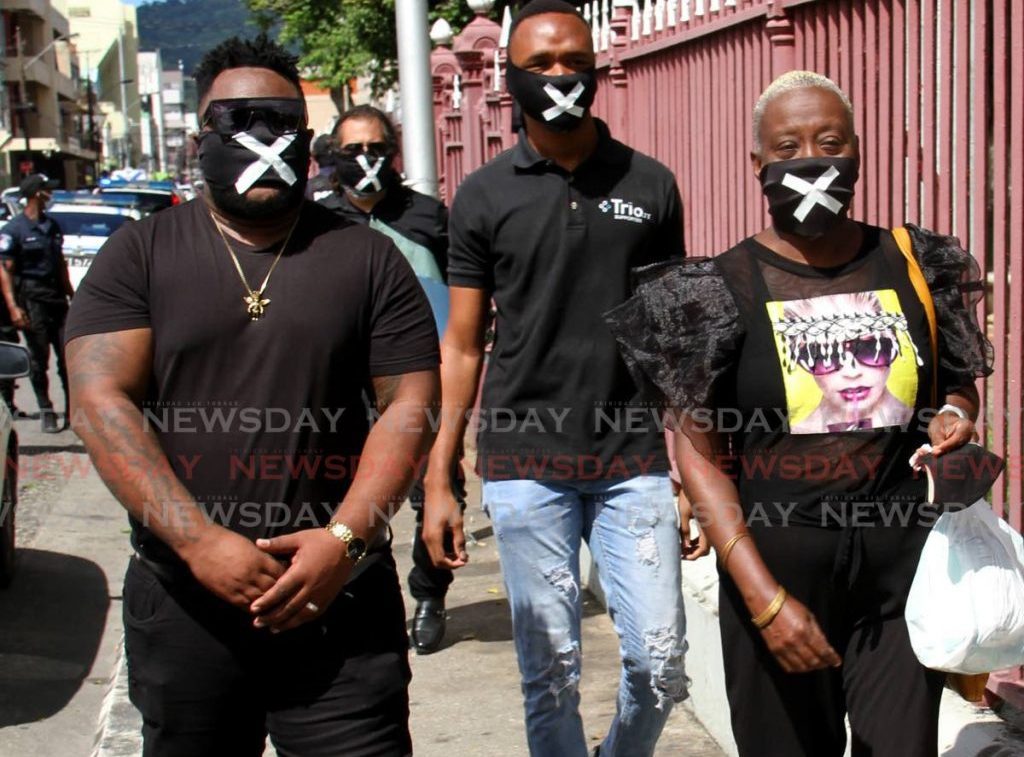 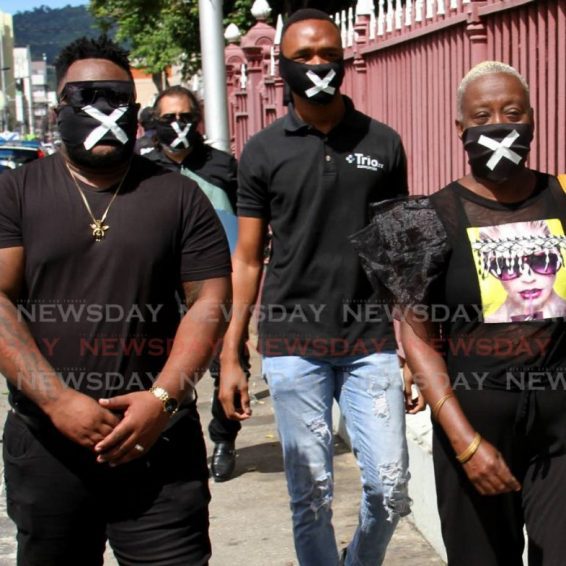 A police officer cautions activist Marsha Riley-Walker during a demonstration outside the Red House on Abercromby Street. – AYANNA KINSALE

Police confronted and dispersed five protesters outside the Red House on Wednesday after confirming that they did not have permission to demonstrate.

Parliament was about to sit to debate the list of nominees for the Police Service Commission (PSC).

This debate followed the resignation of all the previous PSC members.

On September 22, 25 and 27, three members resigned. Then on September 30 its chairman, Bliss Seepersad, resigned after coming under fire for failing to consult the other members when she revoked the acting appointment of former commissioner of police Gary Griffith.

During a protest that ended seconds after it started, UNC members, including leader of the Islamic Front Umar Abdullah called on Seepersad to tell the country what went wrong and called on the government to review the nominees submitted.

Activist Brian Stone displays his placard during a demonstration outside the Red House on Abercromby Street. – AYANNA KINSALE

As the group gathered opposite the Red House entrance, police reminded them that protests contravened the emergency powers regulations, and asked them to put away their placards. Minutes later they took out and held up the placards again to get their message across as MPs arrived, but police stopped them.

They were asked to leave after a small confrontation.

Speaking to Newsday afterwards, Abdullah said they would not stop until the country is given an explanation of what caused the commission to collapse in the course of what should have been a simple procedure.

“That is something that every single person of this nation must be concerned about. People are just scared to come out. Anytime a people are scared of their government, there is no longer democracy in that country. The government has to be scared of the people.

Activists leave Abercromby Street. Port of Spain after being caurioned of being arrested by police officers if they chose to stay and partake in the demonstration. – AYANNA KINSALE

“What is happening is that we have a fascist totalitarian government,” he charged, “and it’s being disguised as democracy. We cannot continue to allow this to happen in this country. We will continue to stand upright. We may look few, but we have a lot of support.

Abdullah said “everybody” knew the nominees are “very questionable” and their selection was “biased.”The nominees are selected by the President and the list sent to Parliament for approval.

President Paula-Mae Weekes has also been criticised after a list of nominees for the CoP post was presented to her by the PSC, but was withdrawn in unclear circumstances. There have been allegations that a government official was present and raised issues over the list of potential CoPs.

Abdullah added, “Gary Griffith said during an interview on TV yesterday morning that he is not blaming the President nor the Prime Minister and he is putting the blame squarely on Ms Seepersad. I love Griffith, but it appears as though he is singing for his supper.”

He said Griffith was probably saying good things about the President and Prime Minister “to have favour with them.”