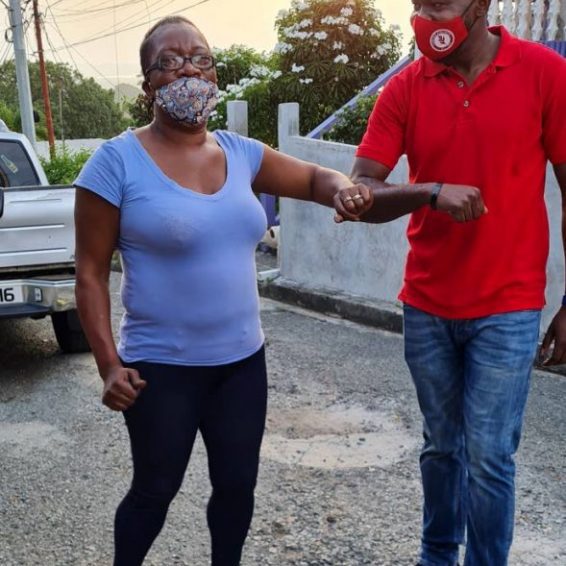 PNM prospective candidate Downie “Jedidah” Marcelle has assured Bethel/New Grange residents, he will remain on the ground and work with the people if victorious in the December 6 THA election.

In an interview with Newsday, Marcelle, who is almost fully recovered from covid19, said he is 100 per cent confident, and considers himself “the man for the job”

Marcelle, 38, said, “I know that I am the ideal candidate to bring Bethel / New Grange to the People’s National Movement, because of my background as it relates to working in the community, building and nurturing change within the community. My involvement with the children of Bethel and environs goes to show that I am indeed the best person for the job, I am indeed your servant leader.

He said at the end of the day, the representative is just one person, but the community of Bethel/New Grange is made up of thousands of people so together, hand in hand, they can get the job done.

“There is no doubt that there will be difficult periods, because this is no fairy-tale but I, Downie Marcelle, am willing to work with the people of Bethel/New Grange for a better community and by extension, a better society.”

He said his goal is to empower the youths of the district, noting that the area is filled with talented youth and untapped potential.

“I will make it my duty to nurture that untouched talent and groom quality young men and women.”

Currently employed as a carpenter at the THA Division of Infrastructure, Quarries and the Environment (DIQE), he said the area is filled with entrepreneurs, carpenters, chefs, cooks and so many other skilled people, so as their area representative, he wants to guide them and help them achieve their potential.

“Together with programmes such as MIC (Institute of Technology), CCC (Civilian Conservation Corps) and even BDU (Business Development Unit), we can make Bethel/New Grange a better place.”

Working with youths through sport, music

Additionally, he said the district is also known for its love for sport.

“It’s something that’s in our culture. With that in mind, I want to create an avenue for persons to gain scholarships that will allow them to travel and not only further their education but further their sporting discipline.”

He is the founder and president of the Ball Blasters Youth Academy, which he describes as a safe space for children from within the community of Bethel/New Grange.

“Upon inception, I saw the need to merge sport and academia as it was something that has been plaguing the community for the past 20 years. Over the years, we have seen an increase in the number of young men becoming secondary school dropouts. Even at the primary level, we are seeing boys leaving school at 14 after having to repeat classes or repeating the Secondary Entrance Assessment. Some of them are even leaving primary school simply because they are too old to stay another year.

“At Ball Blasters, we saw the need to address those issues and as a result, when students come to training on a Saturday, they are also tutored by trained and qualified teachers. Today, we have a 100 per cent success rate with our students. No repeaters, no failures.”

Ball Blasters Youth Academy, he said has been planting seeds within the Bethel/New Grange community so that ten years from now, fewer high school dropouts will be seen but rather an influx of intelligent sportsmen and sportswomen, doctors.

“Because of my success rate with Ball Blasters, I am now the head coach at Signal Hill Secondary School and I have the opportunity to inspire the children and nurture them to become their best selves.”

The former graduate of the Montgomery Government Primary School and Elizabeth’s College said his family has deep roots in Bethel.

Hinds: No word on repatriation of 15 bodies found off Tobago

Called to serve by God

But just why did he choose to enter the political ring at this time?

“I believe that you cannot escape politics if you truly want to make a change within your community and by extension, the island of Tobago. Because of my love and passion for serving and assisting others, I believe that politics is the perfect opportunity to do that, but on a larger scale.”

When he was confirmed as the nominee, he said he was a bit surprised.

“I know that my mummy is elated and proud – this opportunity is God’s doing, I believe that he has rewarded me for my faithfulness, for always answering to the call to service.”

He said from the inception of his walkabouts, prior to him testing positive for covid19 and being in quarantine, the feedback he’s received has been positive.

“During the little time that I’ve spent on the road, persons were happy to see me. I believe that when you see your prospective candidate, you see hope, you see an opportunity to have your cries heard and your burdens lifted so it’s my responsibility to ensure that they are taken care of and that their needs are met.

“For the most part, persons are asking for jobs, because as we are aware, several persons were negatively affected as a result of the covid19 pandemic. Although this situation is not unique to Trinidad and Tobago, the Tobago House of Assembly and the PNM as an institution has been doing a fantastic job at navigating through the storm. In essence, persons are not asking for much, they are simply asking for the necessities, drains, jobs, food etc.”

To this end, he remains steadfast in his belief that the PNM is the best party to take the island forward.