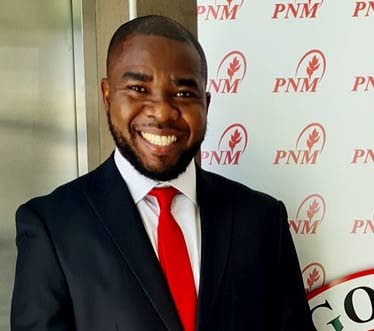 Despite battling the virus, Marcelle remains confident of emerging victorious in his fight with Progressive Democratic Patriots’ candidate Terance Baynes for the electoral district.

Baynes won what was previously Bethel//Mt Irvine in the January 25 THA election, edging PNM’s Shomari Hector by a mere 17 votes. The seat proved critical as the PNM and PDP tied six-six in the election.

PNM Tobago Council leader Tracy Davidson-Celestine acknowledged the covid19 blow to Marcelle’s campaign but feels he has the tools to overcome the health obstacle.

Davidson-Celestine, during a walkabout in Patience Hill, said Marcelle’s reputation as a community man augurs well for him.

“Not being on the ground is a significant disadvantage, (but) he is a candidate who is well known in the community. As a matter of fact, he is the coach of a very large football group in that electoral district. And even before he was screened, quite a number of persons from the electoral district called out of me to say that they know him well, and he would be an excellent representative. So yes, we have the challenge of him not being able to walk. But the thing is, his name precedes even the walks that he should do.”

Davidson-Celestine said Marcelle will still be campaigning even though he is is in home quarantine.

“He would have to employ innovative and creative ways to reach out to those communities like Sou Sou Lands. And I know that the team would be using virtual campaigning when they get to respective places. If they’re not familiar with him in any way, they would call him in via video call, in order to talk with them as they continue to canvass and campaign those electoral districts.

“And then he would be doing his (social media) lives so that he can connect with the people at the same time. So it’s a very unfortunate situation but one that brings about some level of innovation and different approach to campaigning.”

Asked whether Marcelle will receive additional support to help him win his seat, Davidson-Celestine said the PNM family is there to help all candidates.

Marcelle, sounding sprightly in a Facebook video post on Monday, revealed a close relative contracted the virus and he later tested positive.

He said his campaign will press on through house-to-house visits by his election team as well as virtually.

He urged Bethel/New Grange residents to share their concerns with members of his team.

“Tell them everything and they will report to me,” he said. “My team will be on the ground and visiting with residents. I will walk with them virtually, through video calls, social media live (stream)s, telephone calls and messages. The technology helps us to make this easier.”

Marcelle said he had not been careless and followed all health protocols during a walkabout last week.

The Bethel resident and gospel artiste said so far he was asymptomatic and was grateful to have recently received his first shot of the covid19 vaccine.

“No symptoms, no cough, no sneeze, no runny nose, no headache or anything of the sort.”

He urged Tobagonians to get vaccinated, saying he was looking forward to a full return after quarantine to serve the community.