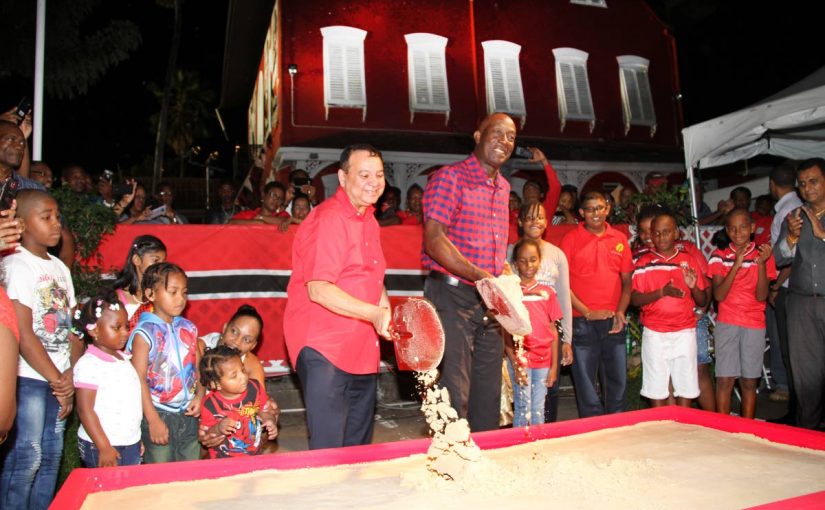 WHILE other parties come and go, the People’s National Movement (PNM) expects to endure another 100 years as the party always ready to make tough decisions for the best future of TT, said PNM leader Dr Keith Rowley. He asked the public, for the sake of their grandchildren, to financially support the construction of a new headquarters for the party of good governance.

The Prime Minister was on Thursday night addressing a three in one event at Balisier House in Port of Spain to turn sod on the new building, to hold the first draw of a fund-raising raffle for this project and to enjoy a pre-Independence Day party.

He said the PNM has provided national leadership for most of its existence since 1956, and is the only truly national party, offering representation from Cedros to Toco and from Carenage to Charlotteville.

While other parties over the years had been formed in barbershops, drawing rooms and on the steps of the Elections and Boundaries Commission office but had largely remained there, the PM said the PNM was the product of high intellect. He asked every member to donate to the building fund, whether $5 to buy one block or a larger sum by a cheque. Rowley said the PNM is an institution without which the country would have drifted into as proverbial rocky river. “Be able to say to your grandchildren, ‘I too contributed to building that new building.’” He recalled that as a boy he had see his mother as a church member toting buckets of sand from a local river to help build a church in Tobago, such that today he is deeply touched every time he passes Mason Hall SDA Church. Rowley promised to care for the historical Balisier House for which a separate fund-raising account has been opened.

Of the new HQ, he said, “This building is not for me or you but for the young people to take up the mantle for another 100 years.

“We do not govern for today or for the next election, but for the future of Trinidad and Tobago.”

Saying some days in life are sunny while others are rainy, Rowley said, “We make difficult decisions in the spirit of a political party that we are not hear for today or tomorrow, but for as long as there is a Trinidad and Tobago.” He said leaders and supporters of the party will come and go, but the PNM will live on, “Let’s put down foundations so those who come behind will meet a better place.” He said the new building will be “a little more comfortable, larger and stronger, but it will still be Balisier House.”

Saying there is tremendous good will towards the PNM across TT, Rowley urged members to sell tickets for the raffling of several motorcars. “People will want to contribute to it by buying a ticket.”

Sat Sep 1 , 2018
With just one week to go before the close of nominations for the People’s National Movement (PNM) internal election, Prime Minister Dr Keith Rowley seems set to contest the leadership unchallenged. Up to news time, party sources said there has been no reports of any challengers to Rowley, who, at […]