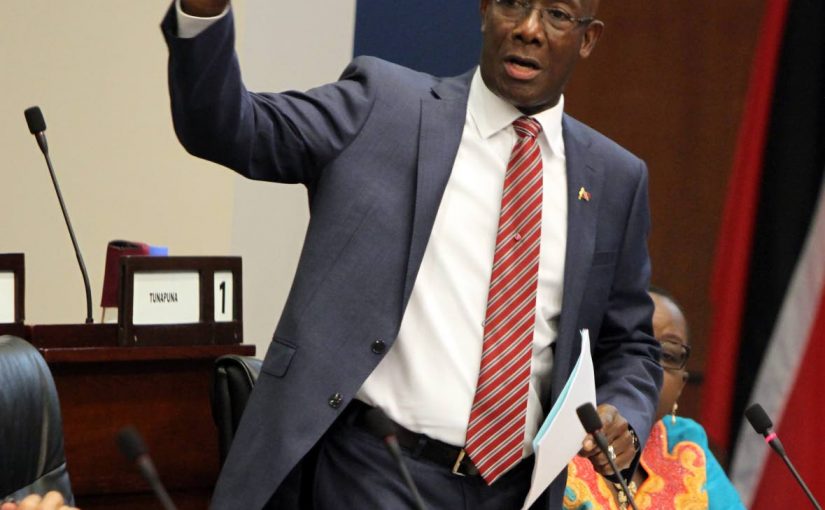 THE Prime Minister said the “deal breaker” for Government supporting Gary Griffith’s nomination for Commissioner of Police (CoP) was his courage to oppose his former People’s Partnership colleagues for the country’s good. Dr Rowley made this declaration shortly before the House of Representatives passed a motion to approve Griffith’s nomination.

The outcome saw 19 government MPs supporting the motion while 13 Opposition MPs abstained. Rowley said things happen in life that changes one’s view of things. Identifying Life Sport as one of those things, Rowley said the programme was a “$400 million criminal empire that was being funded by the State.”

“It led to murder and mayhem and a level of criminality in the East-West Corridor, never before seen in the history of TT.” Rowley said Griffith was “in the forefront of alerting the public” about the scandal.

“That is a good reason to change my mind. He stood up for the people of TT against a Cabinet that was prepared to bury and hide Life Sport. This country has not overcome the effects of Life Sport up to this day.” The PM said Griffith became a pariah because “he was prepared to speak truth to power.”

On Griffith being a witness in a matter against former attorney general Anand Ramlogan, Rowley said: “The public saw Gary Griffith speaking the truth in a matter and the (then) prime minister (Kamla Persad-Bissessar) fired him.”

He said Griffith gave his testimony before the September 7, 2015 general election and it “has nothing to do with any of us in this room today.”

On emailgate, the PM said, “Of all the persons who were named in that matter, Gary Griffith was the only one who turned in his devices and gave access to his accounts.” Rowley said he had nothing to apologise for regarding emailgate. Unlike other political parties, Rowley said the PNM does not treat its former political opponents as if they have “leprosy.” He cited the appointment of former National Alliance for Reconstruction attorney general Anthony Smart as First Citizens Bank chairman as an example.

The PM observed Persad-Bissessar’s absence from the debate. He said after Canadian Dwayne Gibbs was fired as CoP in July 2012, Persad-Bissessar never thought it important in her remaining three years in office to appoint another CoP. Rowley said it was unacceptable for some members of the Police Service to say they will not support Griffith. Promising to make 10,000 copies of the police manpower audit available to the public, he said the contents of the audit reflect Government’s view that “the current Police Service is not able to heal itself.”

Speaking after the sitting about allegations of potential lawsuits, Attorney General Faris Al-Rawi said, “There is a freedom of anybody to approach the courts.” Should this happen, Al-Rawi said, “No doubt it will be a claim against the Police Service Commission. The Government has no role or function in that.” Leader of Government Business Camille Robinson-Regis said, “The process has ended as far as we are concerned and as far as the Parliament’s involvement.” Robinson-Regis shared Al-Rawi’s optimism about working with Griffith when he assumes office.

Tue Jul 31 , 2018
PUT $15,000 in public servants’ accounts by the end of August 2018. This was the demand made by president of the Public Services Association Watson Duke yesterday after refusing a zero per cent offer from the Chief Personal Officer (CPO) in May. Duke made the demand at a news conference […]