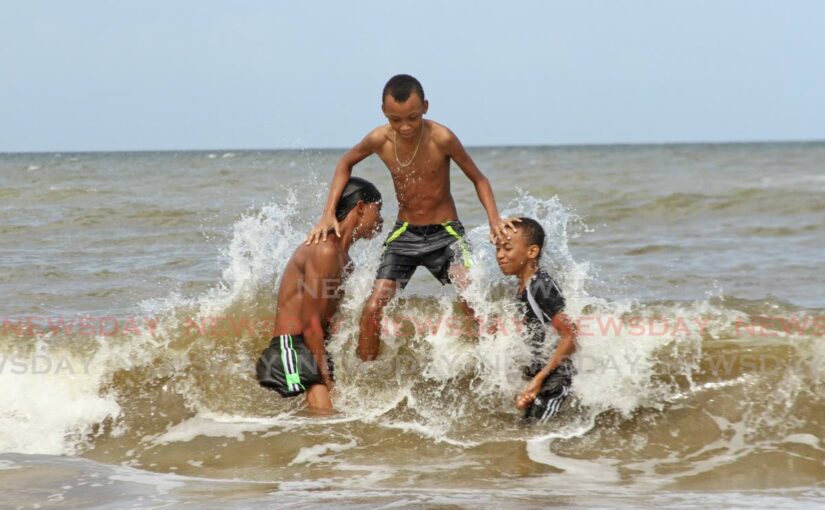 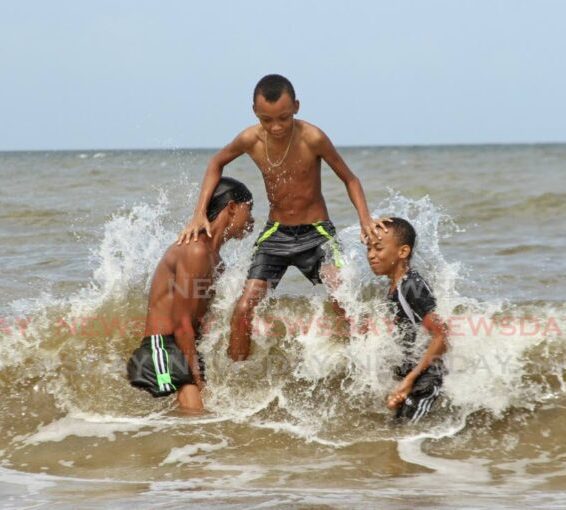 FUN IN THE SAND: Alexandra Forgenie, three, plays in the sand with her mother Andrea Forgenie at Store Bay on Monday. Photo by David Reid – SIT DOWN: Kaitlan Peters and her mother Ardelle, both dressed like Santa’s little helpers, relax at Maracas Bay on Monday. Photo by Angelo Marcelle RELAXATION: George Mundy of the US, reads a book while relaxing at Mt Irvine beach, Tobago on Monday. Photo by David Reid – LAW AND ORDER: Constables Patricia Lalla and Dominic Constantine on a routine patrol to ensure no one was around after 12 pm deadline to vacate the beach in Macqueripe, Chaguaramas. Photo by Roger Jacob BEACH STROLL: Tourists Quentin Paris and Camille Bottenwieser, who both arrived in Trinidad in September, stroll along the shore in Macqueripe after taking a dip in the water on Monday morning. Photo by Roger Jacob SCANT: Only a handful of people were at the Clifton Hill Beach facility on Monday, the first day of the reopening of beaches. Photo by Marvin Hamilton LET’S DO THIS: A man in a wheelchair registers to have his vaccine booster at the SAPA mass vaccine site in San Fernando on Monday. Photo by Lincoln Holder WE DID IT: From left, Shane Heung, Maureen Cabral and David Cabral leave the Paddock, Queen’s Park Savannah, Port of Spain after getting their covid19 booster vaccine shot. Photo by Sureash Cholai Rita Cox, 95, is escorted by her children, Al and Maria for her covid19 vaccine booster shot at the Paddock of the Queen’s Park Savannah in Port of Spain on Monday. Photo by Sureash Cholai Little Azzaria Wells gives her father Sunny Pulchan a helping hand at their home in Sobo Village Extension, La Brea on Monday afternoon. Photo by Marvin Hamilton
See also

The post Photos of the Day: December 20, 2021 appeared first on Trinidad and Tobago Newsday.