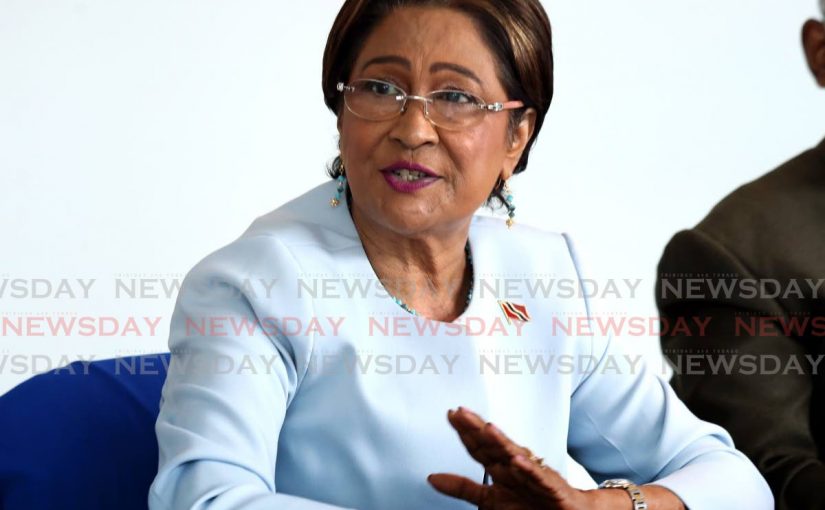 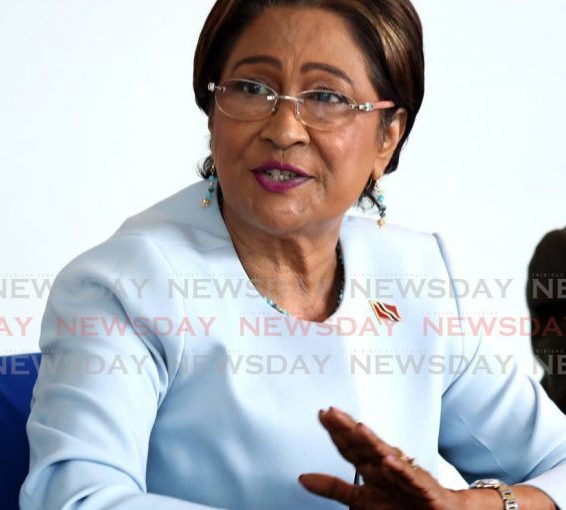 OPPOSITION Leader Kamla Persad-Bissessar questioned the impartiality of the independent senators when she addressed a UNC virtual meeting on Monday.

Urging Weekes to reveal the fate of the commissioner of police (CoP) merit list, Persad-Bissessar said until this is done, the whole process for selecting a new CoP should be paused.

Persad-Bissessar alleged that the independent senators viewed themselves as the PM’s rubber stamp, saying six of them had voted with the Government variously on 13-16 occasions.

She dubbed them “eat ah food” senators, who had been hand-picked by the President and whom the Opposition would deal with if they enter the political gayele.

Persad-Bissessar dubbed Vieira “a pawn in Rowley’s anti-democratic playbook within our Parliament.

Persad-Bissessar alleged Weekes had failed to answer serious questions on the Constitution and was now hiding from the public.

“And now you (Vieira) move this motion to try and silence the voices of the elected Opposition?

“May I remind you that we were elected by over 309,000 people. We are their voices in the Parliament and outside of Parliament.”

She said Vieira’s motion was “frivolous, vexatious, baseless and without merit.”

Persad-Bissessar lamented the disallowance of any debate on Weekes during the censure motion and the sudden end of the budget debate previously.

“Rowley, I know you think the Constitution is like a golf course. You feel you can ride roughshod over it and knock down who you want to and get away with it.

“But the UNC and the people of our country will fight you politically until the end and until our democracy is rebuilt and restored.”

Persad-Bissessar said the Opposition would not support any extension to the current state of emergency (SoE), as it was oppressive and ineffective in curbing the covid19 pandemic,

The PM said last Saturday the SoE will lapse on November 29 and the Government will not ask Parliament to renew it. This would require a special majority in Parliament.

Persad-Bissessar said of Rowley: “He wants to appear like a benevolent dictator. ‘No more SoE,’ was one paper’s front page.

“PNM propagandists and an oppressed population were expressing gratitude, as if Dictator Rowley gave them a gift. But this is no gift from Rowley. He is ‘taking front.'”

She said Rowley knew he could not extend the SoE as the Opposition would not give its required support.

“Did the SoE achieve its objective? Did the rate of spread of covid reduce or increase? Did vaccination rates increase? Have the target levels been achieved?”

Persad-Bissessar said the reply to all those questions was no.

“Rowley knows he cannot justify the SoE, taking away people’s constitutional and human rights, taking away their livelihoods, depriving them of their freedom.

“During this time covid got worse, not better, and we had among the highest death rate in the entire world.

“Rowley’s state of emergency was a complete and utter failure, just like his Government. His Government, and he must be held to account for it.”

Citing the recent murder of Kezia Guerra, 27, she said the SoE had not dented the murder toll, which was now 354.

Persad-Bissessar also attacked the Ministry of Health covid19 team at daily briefings, saying one person liked posing for pictures, while another could be a PNM candidate in the next general election.